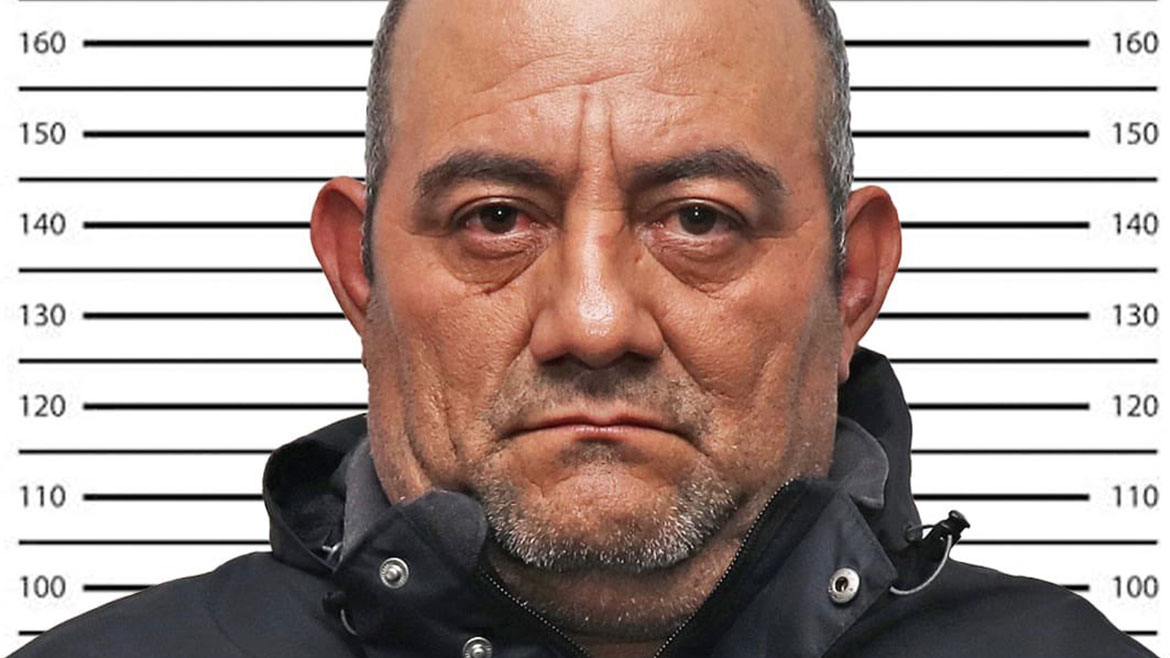 “Otoniel,” is the jailed leader of paramilitary group “Gaitanista Self-Defense Forces of Colombia” (AGC), a.k.a. “Gulf Clan,” and arguably the country’s most important drug trafficker.

Otoniel was born in 1970 as Dario Antonio Usuga into a poor peasant family close to Turbo, Antioquia, the port to the Gulf of Uraba and the Caribbean. The surrounding Uraba region, particularly its rural areas, was under strict control by FARC and EPL guerrillas in the years he and his brother Juan de Dios grew up.

From Marxist guerrilla to far-right assassin

Otoniel and his brother, a.k.a. “Giovanni,” reportedly became members of the EPL, one of the Marxist groups that effectively controlled Uraba at the time, just before Otoniel turned 18.

The group demobilized 2,500 members in 1991, to the fury of fellow-guerrillas of the FARC. The two brothers switched sides before the FARC embarked on the violent persecution of former EPL members.

After in 1995 the military, joined by far-right paramilitary groups from the region, began an overwhelming counter-insurgency offensive, the brothers deserted again. This time to switch sides from the extreme left to the extreme right.

In 1996, they joined the ACCU, a far-right paramilitary group under the command of Carlos and Vicente Castaño.

After the Castaño brothers founded the national paramilitary organization AUC in 1997, the “Centauros Bloc” was formed with Arroyave as military commander, and “Don Mario” of the Uraba-based “Elmer Cardenas Bloc” as the group’s “financial chief.”

Otoniel and his brother were sent to work under Mario, a childhood friend of the Castaños, to combat the FARC and usurp the guerrillas’ major coca business in the central Colombian Meta and Guaviare provinces.

This offensive, carried out in collusion of the armed forces in 1997, was on the bloodiest and traumatic in the history of the armed conflict.

Otoniel demobilized as “Mauricia” in Yopal, Casanare, as part of the AUC’s demobilization process in September 2005, according to court records.

After then-President Alvaro Uribe ordered the arrest of the paramilitary leadership in 2006, Vicente — the last living Castaño brother — ordered Mario and other mid-level commanders to abandon the process and rearm.

The Usuga brothers followed their superior and became his second in command while forming the armed group they would later call the AGC.

While formally presumed alive, Vicente was allegedly murdered in Nechi, Antioquia in 2007. The versions regarding the perpetrators and motives of his alleged death are still disputed.

The alleged murder did cause tensions between the Urabeños and “Los Paisas,” a group founded by AUC commander and Medellin crime lord “Don Berna,” one of the suspected masterminds behind Castaño’s death.

Mario replaced Vicente and retook control over AUC operations in his stomping ground of Antioquia. However, this increased tensions with the Paisas and “La Oficina de Envigado,” the Medellin crime syndicate founded by slain drug lord Pablo Escobar in the 1980s and overtaken by Berna after the legendary drug lord’s death.

After Berna and other former AUC commanders were suddenly extradited to the United States in May 2008, Mario formally announced the existence of the Gaitanista Self-Defense Forces of Colombia (AGC) and a turf war broke out between the groups loyal to either the late Vicente or the extradited Berna.

the AGC overpowered “Los Paisas” by taking control of drug routes and territory previously under control of the AUC in Uraba and along the Caribbean and Pacific coasts.

Nevertheless, a government crackdown led to the arrest of Mario in Necocli, Uraba, on April 15, 2009, effectively putting the Usuga brothers in charge of the increasingly powerful AGC.

While authorities in 2010 falsely claimed the AGC was all but dismantled, the AGC continued its territorial expansion along the Caribbean coast all the way to the Venezuelan border and into the city of Medellin, controlled by La Oficina.

In January 2012, Giovanni was killed at the hands of Colombian security forces. Otoniel responded by ordering an “armed strike” that effectively shut down all economic activity and audaciously showed the authorities who was the real authority

From Uraba, he began a territorial offensive down the Pacific coast to usurp territory under control by Cali-based drug cartel “Los Rastrojos” that by 2013 had been weakened to the point that two of its three leaders voluntarily surrendered to US authorities.

By 2014, the AGC had also settled in central Colombia, where Otoniel had operated as an AUC enforcer for years and where other AUC dissident groups, Bloque Meta and Libertadores de Vichada, had taken control of the drug trade from central Colombia to Venezuela.

The almost unabated increase in power of Otoniel spurred national authorities in February 2012 to order “Operation Agamedon,” the largest manhunt since Pablo Escobar.

More than 1,200 policemen were sent to Uraba, joined by military forces, to take down the country’s most wanted man once and for all.

The operation proved an embarrassing failure and Otoniel was never arrested. It did, however, limit Otoniel’s freedom of movement and he was forced to continually be on the run and keep relocating, in spite of a serious hernia he had developed over the years.

In 2016, faced by the embarrassment that was becoming Operation Agamedon, President Juan Manuel Santos doubled the reward for information on the AGC chief’s whereabouts to $1 million. Otoniel responded offering a $300 reward for each murdered policeman, which led to a series of cop killings in the AGC’s expanding territories that continues to this day.

In order to avoid capture, the drug-trafficking warlord reportedly avoids the use of electronic equipment and runs his businesses using human messengers only.

To evade arrest by the search bloc, he allegedly stays in jungle shacks he constructed for local peasants who are forced to host their patron and keep a room free for the drug-lord’s two by two meter orthopedic mattress he needs for his hernia.

Apart from his alleged abundance of drug-related crimes, Otoniel allegedly has become Uraba’s most prolific child abuser, having sexually abuses numerous girls between the age of 12 and 15, mostly daughters of the peasants forced to house him.

Otoniel has been sentenced to 40 years in prison for his participation in the 1997 paramilitary Mapiripan massacre that took place when the Centauros Bloc occupied the village for five days, during which the paramilitaries murdered at least 30 of its terrified inhabitants.

The warlord and his group since 2014 have been calling for inclusion in an ongoing peace process with the FARC, but the call has been systematically ignored by the government and local media.

Instead, the authorities determined them, ELN, ERPAC heir “Los Puntilleros” and EPL dissidents “Los Pelusos” a Class A Organized Armed Group, allowing the military to carry out aerial bombings on Otoniel and his men, not allowed on common criminal suspects.

Attempts to surrender to justice

Otoniel announced in September 2017 that he and his group were willing to submit to justice after which secret negotiations began with the government of President Juan Manuel Santos.

The bill that created mechanisms that would allow the mass surrender of illegal armed groups like the AGC got bogged down in Congress in 2018 as lawmakers had gone on campaign.

Sentenced to prison for

The demobilization process was stopped in its tracks after far-right President Ivan Duque took office in August 2018 and announced he would “dismantle” rather than demobilize the AUC dissident group.

The failed attempt to surrender triggered a turf war between the AGC and a split-off faction that opposed demobilization, “Los Caparrapos.”

The split put pressure on the AGC in the Bajo Cauca region in northern Antioquia where the Caparrapos were strongest. 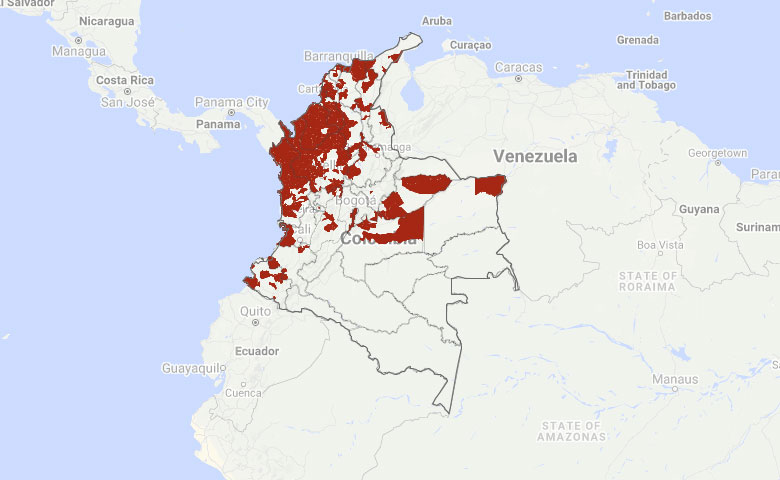 Otoniel was arrested on October 23, 2021 during a joint operation that was carried out with intelligence agencies from the United States and the United Kingdom.

The AGC leader was hiding in a ranch outside of Necocli, a municipality in the heart of the Uraba region at less than 50 kilometers from Otoniel’s birthplace.

Authorities began procedures to extradite to the United States where the AGC leader was wanted on drug trafficking charges.

The extradition was opposed by victim organizations that wanted Otoniel to stand trial in Colombia where the long-time paramilitary leader committed most and the worst of his crimes.