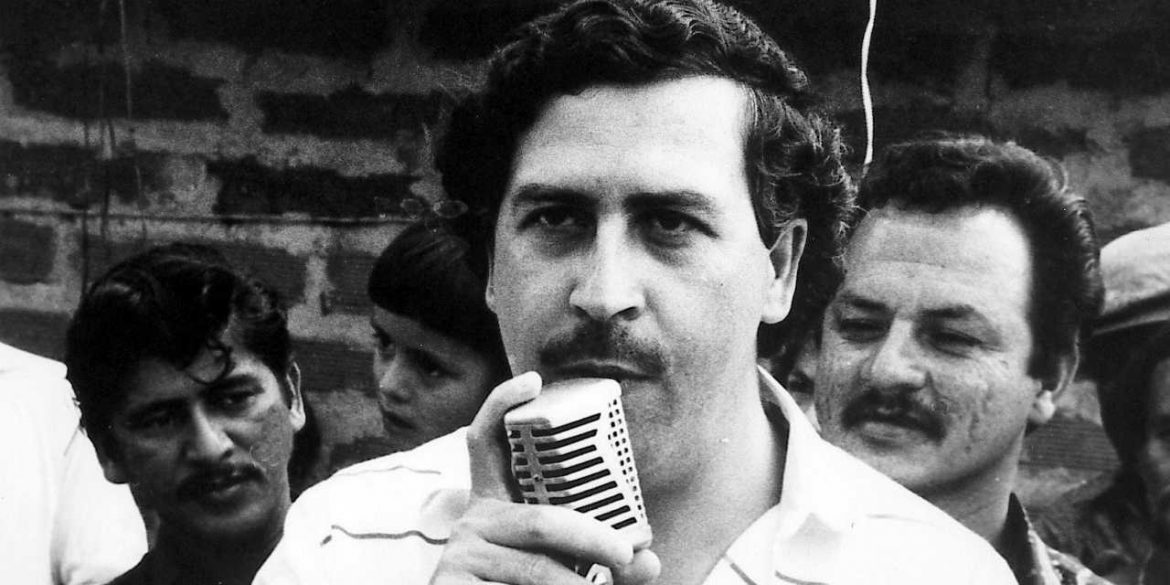 Pablo Escobar is one of the most successful, violent and well-known criminals in Colombia’s history, who become fabulously wealthy by controlling the cocaine trade to the United States.

It took thousands of murders to gain and maintain his empire but tales of his extravagance and generosity alongside this are still a cause of fascination. 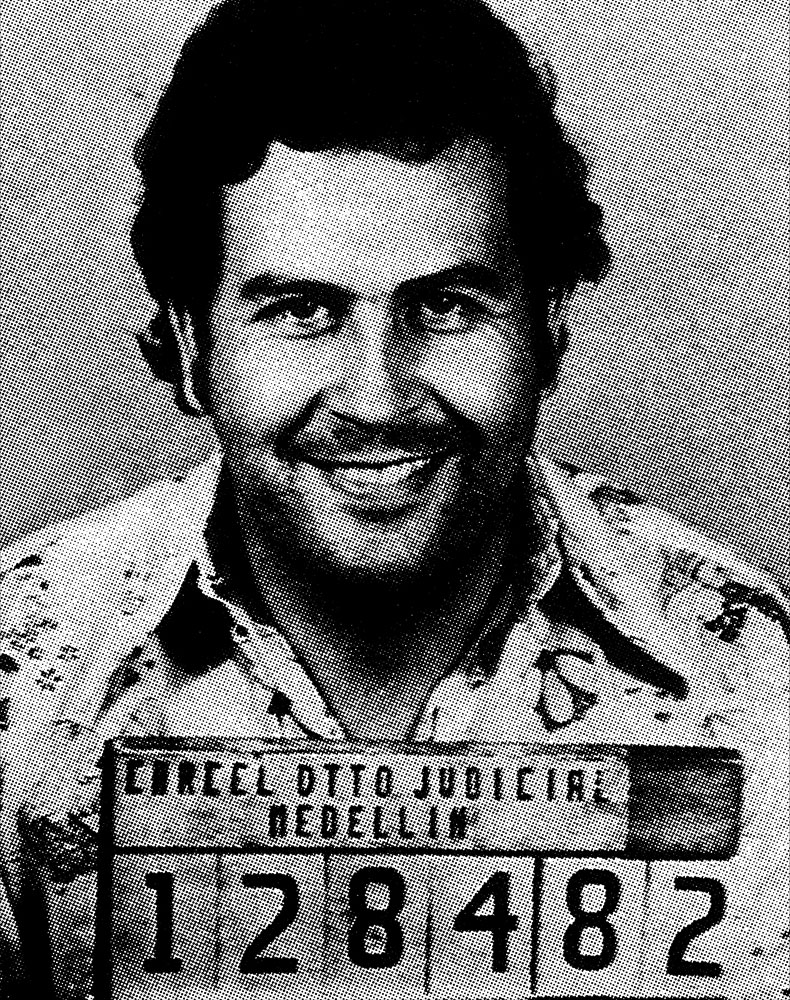 One of Escobar’s first mug shots

Pablo Emilio Escobar Gaviria was born in 1949 to a poor family in Rionegro, a village outside Medellin, his father a poor farmer and his mother a schoolteacher.

When he was two years old the family moved to Envigado, a town bordering Medellin to the south that was to remain home for most of his life.

His criminal career is said to have begun in earnest after lack of money forced him to leave university. Early exploits included stealing gravestones to re-sell, stealing cars and street scams.

By the 1960s he was a small-time marijuana dealer and a gunman in the drug-trafficking business.

But Escobar was a man of ambition and not content to be small-time. His first big money came not from drugs but from kidnapping a wealthy businessman.

He collected $100,000 in ransom money and with this in his pocket he moved on to more lucrative work in the drug-trafficking world of the early 1970s.

His timing was perfect; Demand for cocaine in the United States was about to go through the roof.

Escobar initially worked for other drug traffickers until 1975 when a big Medellin cocaine trafficker named Fabio Restrepo was murdered, reportedly on Escobar’s orders. All Restrepo’s men were told they were now working for Pablo Escobar.

From this base, Escobar took over the entire drug trade in Medellin, establishing what became the Medellin Cartel.

Over time he came to control over 80% of the drug trade to the United States, building his reputation for violence as he did so. He was known not only for killing rivals and opponents – and even their families – but for personally executing uncooperative subordinates. 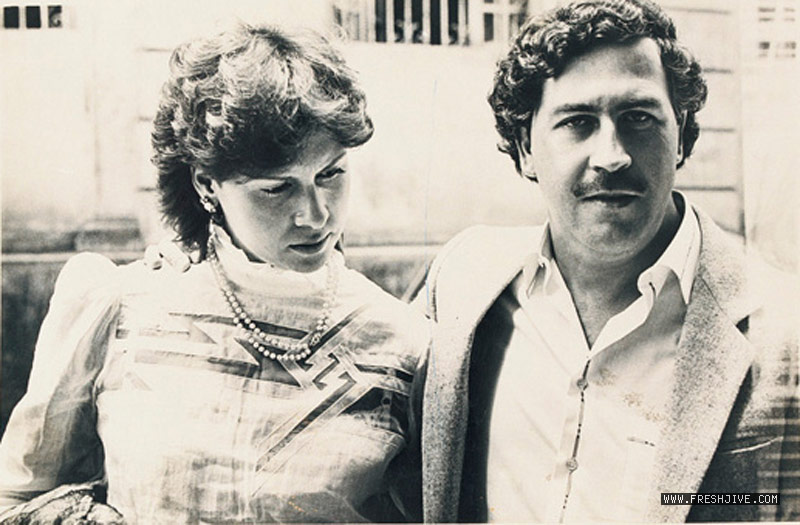 In 1976, Escobar married the then-15-year-old Maria Victoria Henao with whom he had two children.

In May of that year Escobar and some of his men were arrested coming back from Ecuador with a shipment of cocaine paste.

After unsuccessfully attempting to bribe the judges he succeeded in bribing the arresting officers and the case was dropped. He would not be arrested again for 15 years.

The majority of Escobar’s business consisted of importing cocaine paste from Peru and Bolivia, processing it in Colombia to then fly it to the United States.

For much of its existence the Medellin Cartel was involved in a war with the rival Cali Cartel for control of the trade but until his last days there was no doubt who was on top.

Escobar is reported to have been making $30 billion a year at the height of his success and Forbes magazine named him as the 7th richest man in the world. He had a fleet of cars and aircraft, extensive estates and what amounted to a private army.

According to Escobar’s brother Roberto, who later wrote a memoir called “The Accountant’s Story,” the cartel spent $2,500 every month just on rubber bands for the money and even owned two submarines for transporting cocaine.

At one point, the plane Escobar was using to fly money back from the U.S. became too small to carry the vast quantities of cash so he bought a new and bigger plane solely for this purpose. They had so much money they stored it in warehouses and Roberto claimed they had to write off 10% of this every year due to rats eating the cash. 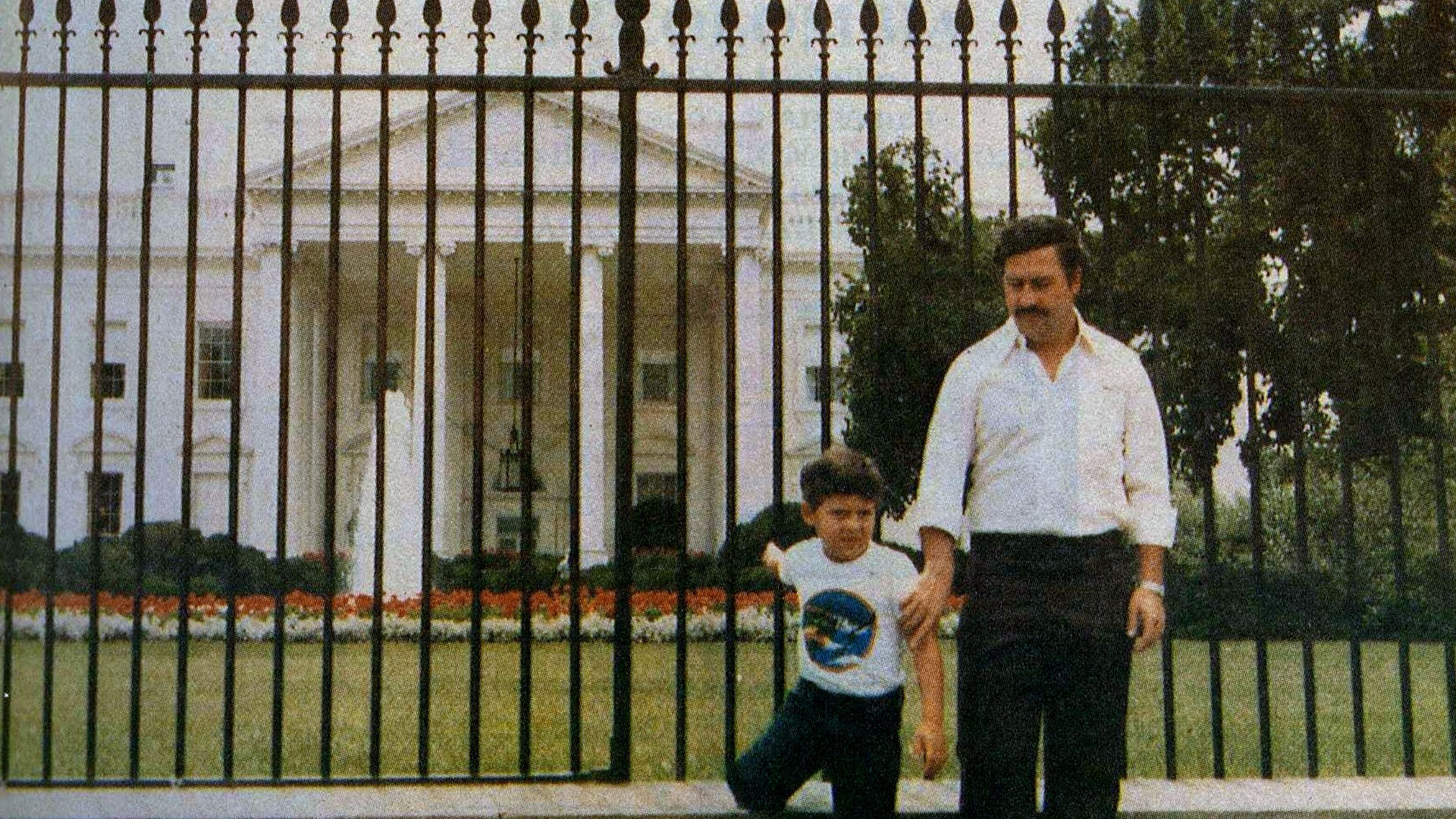 Pablo Escobar and his son pose before the White House

Escobar had a phrase to explain how he dealt with politicians and judges: “plata o plomo”, meaning silver or lead, money or a bullet. As a well-known figure in Medellin he used these methods to ensure he could not be caught or convicted.

Politicians or journalists were assassinated at his orders or intimidated into silence. This culminated in the assassination of three presidential candidates in a single presidential election campaign. 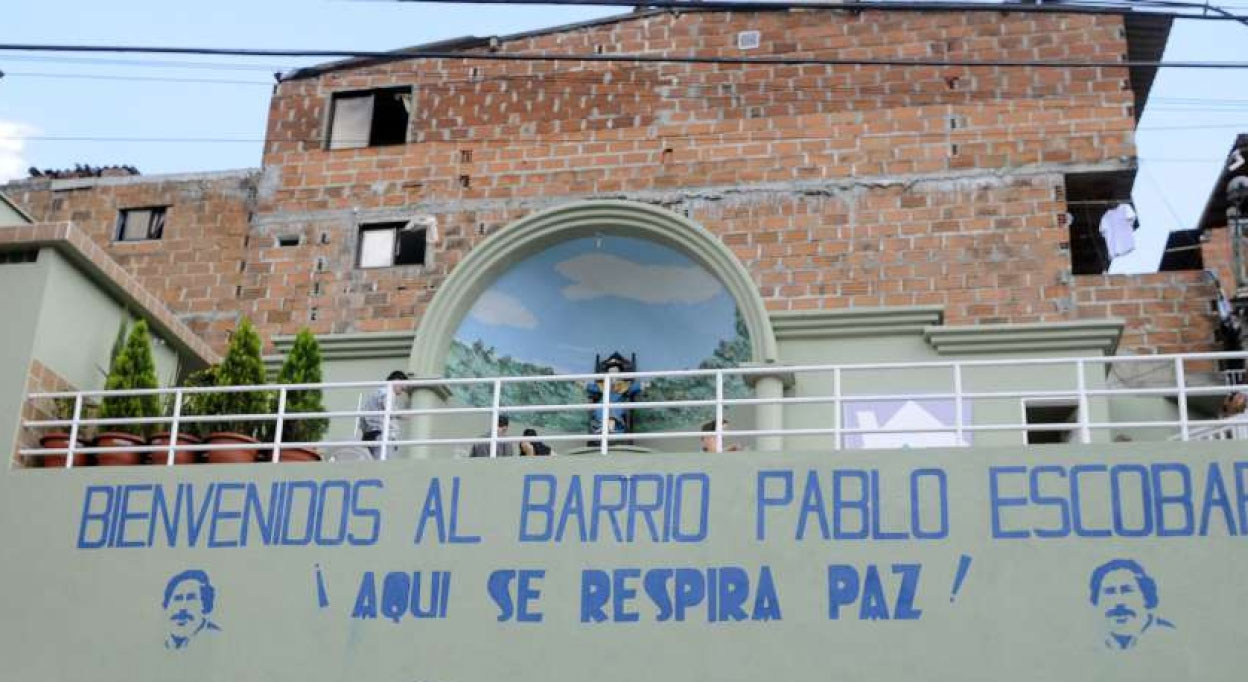 He bought popularity by building football fields and sports facilities, supporting health and education programs and even building a whole neighborhood — the still existing barrio Pablo Escobar — to give to poor people.

There were fireworks in Medellin every time a new drugs shipment reached the United States and Escobar was known in the streets of Medellin as “Don Pablo.” 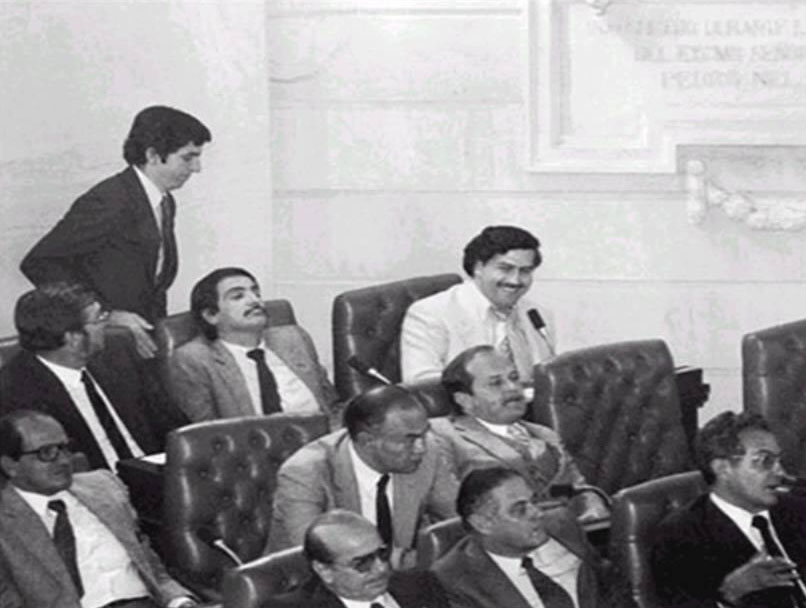 In 1982 Escobar was for a brief period elected to the house of representatives of Colombia’s Congress. His political leanings were to left-leaning, but he also expressed admiration for British Prime Minister Margaret Thatcher.

But his real business continued all the while, helping to make Colombia the murder capital of the world, peaking at 27,000 murders in 1992.

In pursuit of power he carried out terrorist bombings as well as individual executions, the worst of which was the bombing of a presidential candidate’s airplane that killed 110 people.

In the end Escobar was too successful and too well-known. The United States increasingly put pressure on Colombia to put an end to his reign.

The killing of presidential candidates who had promised to extradite him to the United States eventually pushed Colombia’s authorities to act and the kingpin had to go underground.

It was during this period that he put a bounty on the head of every police officer in Medellin, resulting in the murder of 600 officers by youths seeking the reward.

However he was still so powerful that the arrest, when it finally came in 1991, was on his own terms, and the prison was one built by himself. He is even thought to have put pressure on Congress to forbid extradition from Colombia before turning himself in, thus ensuring he could not be sent to the United States. 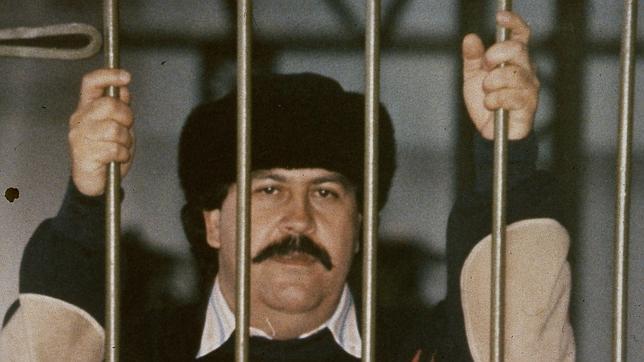 Escobar in his “Cathedral” prison

In “prison” – in fact a luxurious residence called “The Cathedral” – he continued to live like a king, was allowed to invite guests, including prostitutes, and even visited the local town.

He ran the Medellin Cartel while in prison but when he killed two of his own associates the authorities decided he had gone too far while former associates turned against him. The government planned to move Escobar to a real prison but, hearing of this, the drug lord escaped and went on the run.

A fugitive, now for real

From this point on Escobar’s fate was sealed: the authorities, with the help of funding and support from the U.S., began to hunt him down, and it is doubtful they wanted to take him alive this time. 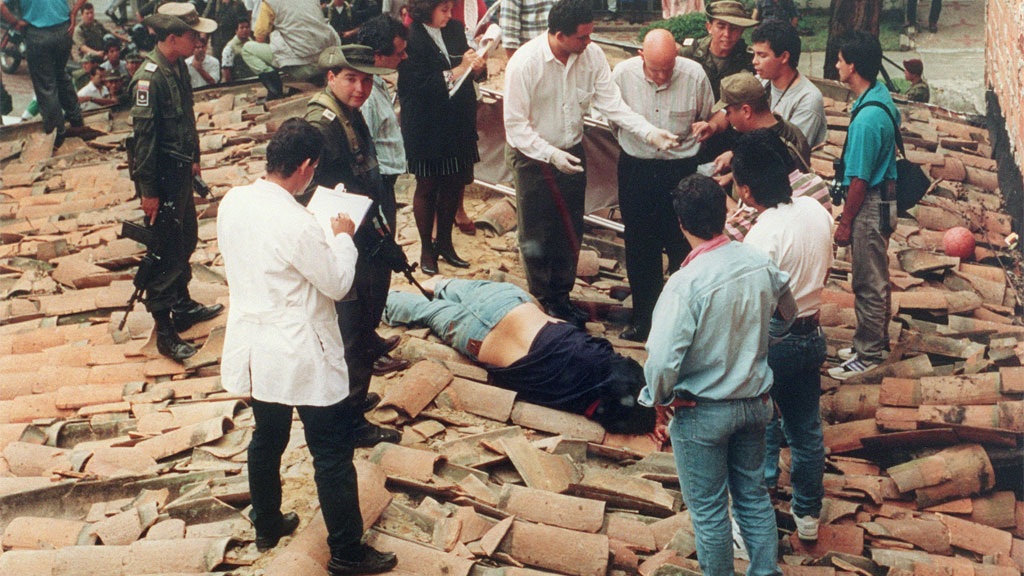 Escobar’s body after being killed.

Meanwhile Los Pepes, a vigilante group formed by Escobar’s former associates and probably backed by the Cali Cartel and elements within the police force, joined in the hunt.

Despite the manhunt it took 16 months to track Escobar down, during which he used his usual violent methods to keep his location secret.

In December 1993 he was finally located with a phone call made by his brother: he was in Medellin.

When the police raided the property he and his bodyguards tried to escape across the rooftops. Escobar was shot and killed at the age of 44.

The house where he died has since become an attraction for looters, trying to see if some of Escobar’s riches were hidden in the hide-out.

The location of his death also attracts tourists, curious to know about one of Colombia’s infamous citizens in recent history.

Today Escobar is remembered for his wild success, for his normalization of casual violence in the drugs trade, and for his ability to completely corrupt the authorities. He is still remembered by some of Medellin’s poor as someone who didn’t forget them at the height of his power.

As an organized crime boss he is a legend and has inspired films, books and television series.

Escobar’s shadow meanwhile still hangs over Medellin in the form of the “Oficina de Envigado.”

While the Medellin Cartel fell apart after his death, the Oficina — originally created as an enforcement unit for the Cartel — was taken over by Pepes member “Don Berna” and still is Medellin’s primary crime syndicate controlling much of the city’s drug trade and extortion schemes.