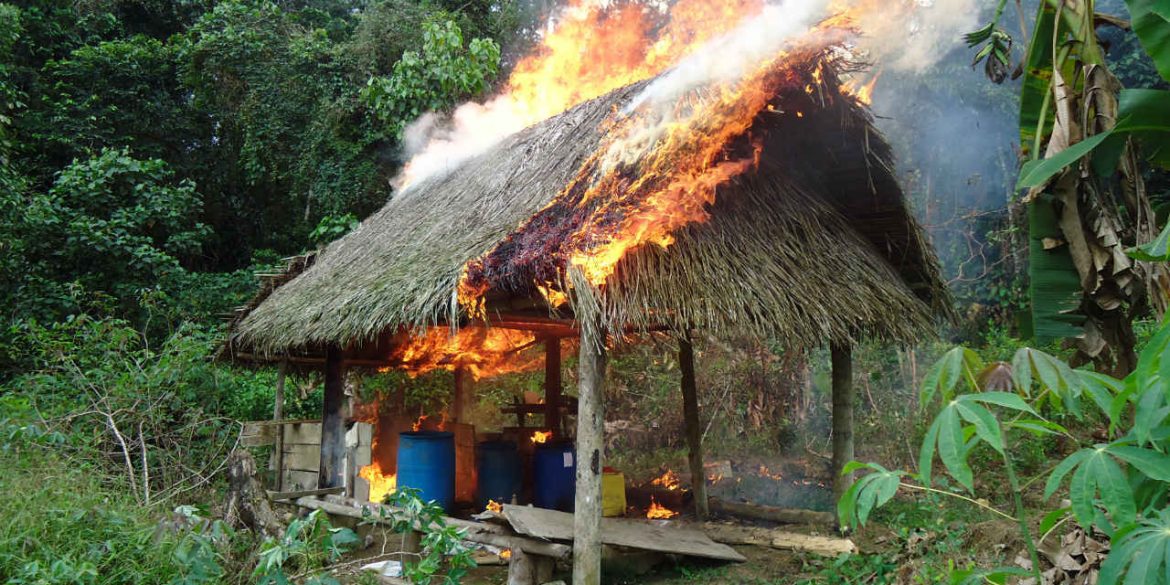 Some 4% of the world’s population, some 300 million people, has consumed cocaine in their life. Colombia produced an estimated 70% of the cocaine consumed over the past year.

In 2018, 18.1 million people used the illicit drug worldwide, consuming almost 2,000 tons of cocaine that is produced in the Andean region, according to the United Nations Office on Drugs and Crime.

The demand for the drug comes primarily from the United States and Europe, but South America has also grown into a major consumption market.

Almost all cocaine consumed across the globe comes from Colombia, Peru and to a lesser extent Bolivia; countries where coca — the crop used for cocaine — is endemic and has been consumed by chewing the leaves or making tea for millennia.

In Colombia, the coca used to produce cocaine is grown mostly in remote parts of the country where the state has been absent and locals have no access to the legal economy.

Because of the lack of state control, land is available for all kinds of illegal or informal activity, including coca cultivation.

In 2018, Colombian coca farmers use approximately an accumulated area of between 169,000 hectares to produce the country’s cocaine, according to the UNODC.

At least 130,000 farming families live off coca, producing the crop mainly on a small scale.

These families receive on average little less than $1,200 a month from selling coca, which sells at a little more than a dollar per kilo, depending on the region.

To produce one kilo of cocaine some 125 kilos of coca is needed, which would cost a local drug lab $137.50. Once the lab has turned the coca leaves first into coca paste, then into coca base and ultimately into real cocaine, the value will have increased to $2,269.

By the time it gets to the street in, for example the United States, that kilo of cocaine will provide $60,000 in revenue. In Australia this could be as much as $235,000.

Authorities are trying to curb coca cultivation by eradicating plants and, until recently, spraying chemicals over areas where coca fields are most prevalent. Nevertheless, Colombia had a record potential cocaine production of 1,379 tons in 2017.

According to Colombia’s Defense Ministry, it destroyed more than 80,000 hectares of coca and seized more than 400 tons of cocaine in 2018.

Combating cocaine production is complicated. Many farmers have no alternative and Colombia’s government lacks the capacity to confront the industry that is protected by illegal armed groups with huge financial resources to corrupt state officials.

Furthermore, foreign powers disagree on how to combat the illegal drug trade, which has led to to different counternarcotics efforts undoing the work of the other.

While the United Nations and Europe have been pushing crop substitution and rural development, the United States has been pushing for repressive methods like forced eradication and aerial fumigation with chemicals.

Colombia does not have an extensive crop substitution program like Peru, meaning that many farmers can easily replant coca almost immediately after the destruction of their current crops.

Extremely violent resistance from drug traffickers have been complicating crop substitution promoted by the UN and the EU.

From coca to cocaine

Cocaine is made in three separate chemical processes; first the coca is converted into coca paste, then coca base before it becomes real cocaine.

The coca is grown by tens of thousands of peasants in areas that suffer traditional state neglect.

The converting of coca leaves into coca paste is mainly done by the farmers and to a lesser extent by the drug trafficking organizations. This because for one kilo of cocaine requires approximately 125 kilos of coca leaves.

The dried coca leaves are drenched in gasoline for between 8 to 12 hours to extract the alkaloid or coca base.

Next, the gasoline and the leaves are separated from the alkaloid and water and sulfuric acid are added, combined with pulverized limestone or ammonia.

This is then mixed with acetone and laid to rest. The substance is then filtered with more ammonia and washed in water. The water is evaporated by putting the substance in a slow-burning oven, converting it in something similar to oil.

Once cooled down, this substance has become coca paste, which is dissolved in ether. After another filtering round, chloride acid and more acetone are added. Once this is dry, the cocaine is ready.

The drug labs are generally run by the farmers under control of local drug trafficking clans, individual guerrilla units, or associates of the international organizations that traffic the drugs to the US, Europe or the Southern Cone.

Moving the product to the border

The cocaine is hidden in trucks or cars if transported over land, or is moved in small boats through dense jungle areas where rivers provide the perfect corridors for almost unhindered illicit trafficking. Along these routes, the drug traffickers intimidate locals and bribe officials to prevent their routes and shipments from being exposed.

Nevertheless, according to Colombia’s Defense Ministry, more than 150 tons of cocaine is seized annually.

The export of cocaine is supervised by transnational crime organizations that do business with foreign crime organizations, particularly Mexican cartels. In a few cases, the Colombian groups have maintained direct routes to foreign markets.

Most of Colombia’s current drug trafficking organizations were formed a decade ago by mid-level commanders of state-aligned paramilitary groups that were active between the 1980s and the early 2000s.

Some of the organizations have their roots in the old Medellin and Cali cartels.

The traffickers bribe security forces, politicians and judicial authorities to protect their routes, and secure the continuity of their business.

When drugs arrive at Colombia’s Caribbean and Pacific coast lines they are loaded onto small ships or submarines and sailed to transit hubs in the Caribbean and Central America, in some cases already under the supervision of transnational crime groups like the Mexican Sinaloa Cartel.

In the cases of port cities, local crime gangs with close ties to local law enforcement and port authorities oversee the loading of the drugs into containers, often in coordination with international drug trafficking cartels.

Over the past few years, Venezuela has become a major transit hub for cocaine. Hundreds of clandestine airstrips have been found in the country, allegedly used to fly cocaine to Central America or, in fewer cases, to Caribbean islands like the Dominican Republic, Puerto Rico or the Bahamas.

Smaller amount of drugs are trafficked by air, in risky operations by “drug mules” who either swallow small amounts of drugs, or carry pounds or kilos of the illicit substance in their luggage. These drug mules generally work for Colombian organizations with a criminal partner organization in the destination country.

Large quantities of drugs find their way out of the country through the country’s ports where corruption is rife. One important criminal organization running such operation is “La Empresa,” a local mafia that’s long been in charge of Colombia’s largest port, Buenaventura. They will have foreign partners on the receiving end, more often than not these would be cells or gangs linked to large organized crime organizations. 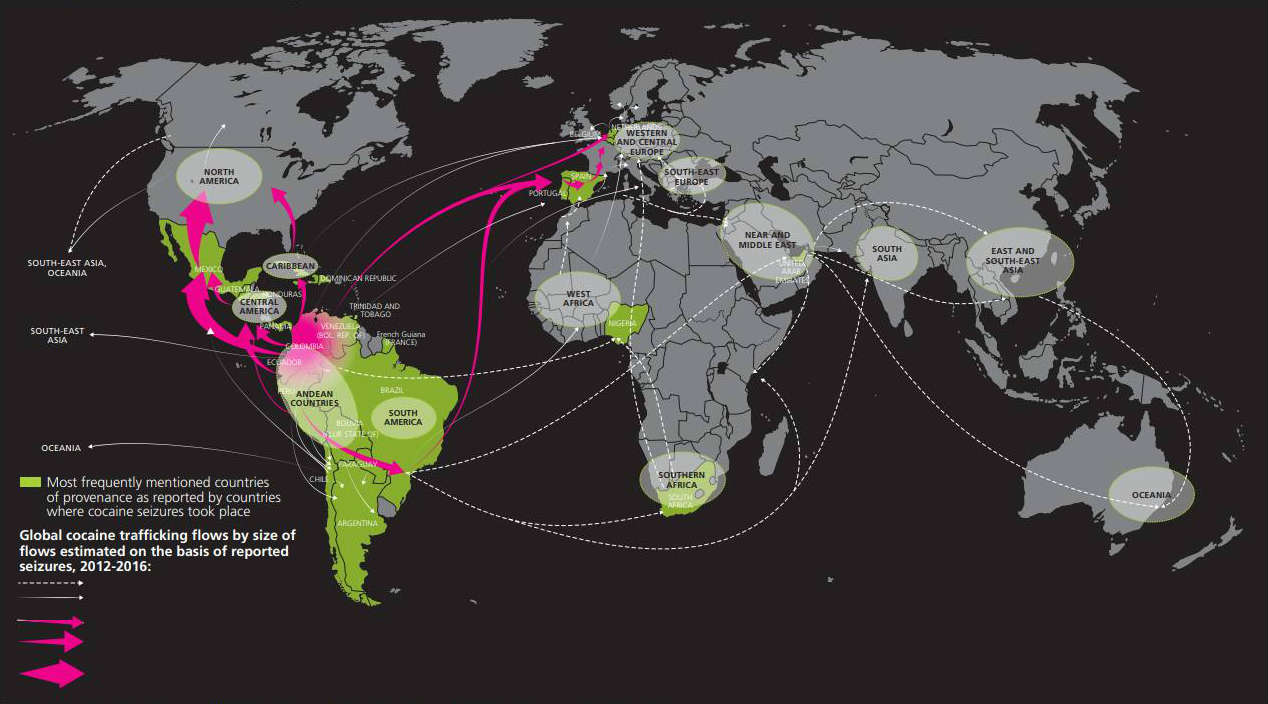 It is almost impossible to define which form of transport is most effective to get the drugs to its consumption markets  in the US, Europe and South America.

The UNODC has said that — when referring to global trafficking of all drugs — most seizures were made while drugs were transported by air or road, but even though only a few busts have been made in ports or clandestine maritime entry points, the largest drug seizures abroad were made there.