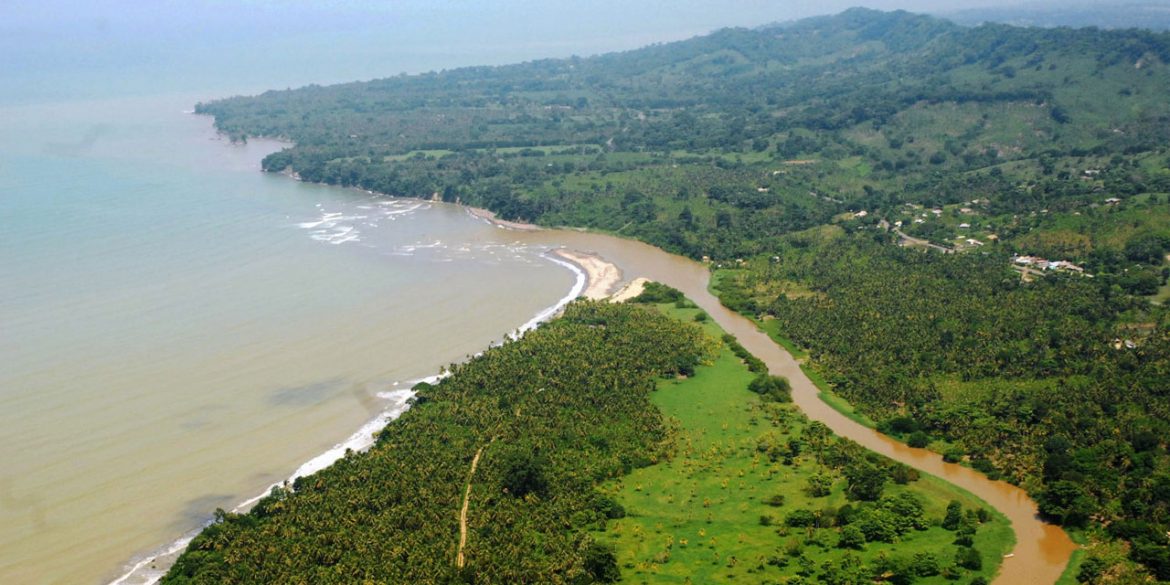 Uraba is a region in northwest Colombia that borders Panama and touches both the Pacific Ocean and the Caribbean.

Uraba is spread out over the departments of Choco, Antioquia and Cordoba. Spain’s first city, Santa Maria la Antigua del Darien, was built there in 1510 after they established colonial rule.

The region consists of exotic beaches and thick rainforest along the Panamanian border and the Pacific coast and fertile agricultural lands inward. Port town Turbo and the road to Medellin are the region’s only connections to the outside word.

Landowners and the landless

The local population mainly consist of colonists from Choco, Cordoba and Antioquia. The indigenous population has been pushed back in the Darien jungle areas.

The region has a strict class division between land-owning and landless farmers, a stubborn remnant of colonial rule on this fringe of civilization.

The landlords maintained the informal class order until the 1970s when many of the locals had enough.

Some joined either the Communist Party and labor unions to challenge the obsolete the landowners’ rule. Others founded guerrilla groups and joined the national guerrilla organizations like the FARC.

The EPL, a guerrilla group that demobilized in 1991, actively promoted land squatting in the 1980s, allowing many poor farmers to appropriate some land of their own, but without any formal titles supporting this ownership.

When Communist Party politicians began occupying powerful government positions that were traditionally divided between the landowners, the ranchers and plantation owners began losing their almost feudal control over Uraba.

At the same time, guerrillas began “taxing” the landowners under the threat of kidnapping or execution.

Mixing the Medellin Cartel and politics

The region became extremely violent after Pablo Escobar and his Medellin Cartel entered the scene in the 1980s and flooded the region’s guerrillas and narcos with drug money and arms.

In return, the land-owning elite began forming self-defense groups to counter the growing power of the peasants, the labor unions and the increasingly brazen guerrillas.

Escobar was killed in 1993, leaving a whole new elite that had gotten rich on the fringes of the Medellin Cartel business empire and had invested their profits in land.

Civilians were called to join these self-defense groups that began working closely with the National Army, intelligence agency DAS and local police departments.

The governor proposed that by the end of the year some 50,000 Antioquians should be associated with the Convivir and local surveillance fronts. To this end, he urged Antioquians to break their civilian indifference. The goal is to have a hundred or so surveillance associations formed after this departmental administration.

Together with the National Army, the paramilitaries began brutally “cleansing” the region of what they considered insurgents and anyone opposing the landowners’ power.

At the same time, they began a massive displacement campaign that allowed plantation owners and ranchers to obtain lands that was owned or appropriated by poor farmers.

When Uribe became president in 2002, the paramilitaries were determined terrorists by the United States over their widespread killing, displacing and raping of civilians.

Umbrella organization AUC demobilized between 2003 and 2006, but left the traditional social order in the hands of dissident group Gaitanista Self-Defense Forces of Colombia (AGC), a.k.a. the “Urabeños.”

Between Uribe’s ascent to governor and his resignation as president in 2010, more than 9,200 plots of land were dispossessed, according to Forjando Futuros, an NGO that monitors land restitution.

Uraba continues to be largely out of reach for the national authorities in Bogota; a 2011 law regulating the restitution of this stolen land has been almost impossible to implement because of the fierce resistance from many of the owners.

According to Forjando Futuro’s database, in 93.3% of the alleged land theft cases, victims continue to wait for a court ruling and are unable to go home. In more than half of Uraba’s municipalities, not one land restitution claim has been resolved in court.