Former President Alvaro Uribe was arguably Colombia’s single most influential and divisive figure of the century, until justice caught up with the far-right politician.


Uribe is the oldest surviving of five children of the wealthy landowner Alberto Uribe Sierra from the Antioquia province, whose murky connections and violent death allegedly at the hand of leftist guerrillas have left an indelible mark on his sons’ careers.

The former president has admitted that his family was close to the Ochoa crime family that founded the Medellin Cartel with Pablo Escobar.

But according to Uribe, their families’ close relation had nothing to do with drug trafficking, but was due to a shared love for horse trading.

Uribe began his political career in the late 1970s, holding the posts of Chief of Assets for Public Enterprises of Medellin (EPM) in 1976 and serving as Secretary General of the Ministry of Labor from 1977 to 1978.

However it was after he was appointed as director of civil aviation agency Aerocivil in 1980 that the rumors about the Uribes’ ties to the Medellin Cartel began.

Uribe’s appointment coincided with the rise of Escobar as an international trafficker, whose narco associates were granted hundreds of licenses by the former Aerocivil chief for airplanes and landing strips.

Uribe’s late older brother Jaime had his first of two children with Dolly Cifuentes, a member of the crime family of the same name whose brother would later become the right-hand man of Mexican drug lord Joaquin Guzman, a.k.a. “El Chapo.”

According to Escobar’s former lover Virginia Vallejo, the legendary drug lord held Uribe in high regard for facilitating the infrastructure that allowed the cartel to transport cocaine to the US.

In 1982, President Belisario Betancur appointed Uribe mayor of Medellin, a post he was to hold for less than three months

His reasons for leaving remain unclear. Several journalists and writers have alleged his mafia ties became an embarrassment to more senior political figures, but this is impossible to verify.

The death of the patriarch

Uribe’s father was killed in a 1983 shootout with alleged FARC guerrillas in the Guacharacas estate the family patriarch had bought in eastern Antioquia in 1978.

According to local newspapers from that period, Pablo Escobar lent Uribe one of his helicopters to pick up his dead father and injured brother Santiago, but this has been denied by the former president.

Escobar’s Medellin Sin Tugurios foundation did honor the Uribe patriarch after his death, placing an ad in local newspapers in which Colombia’s most infamous narco in history said he “regreted” the death of Uribe’s father.

According to the journalist Fabio Castillo, who investigated the Medellin Cartel for newspaper El Espectador, the Uribe patriarch was known as a “recognized trafficker” at the time of his death, a claim that was later confirmed by US intelligence.

One step back, two steps forward

In 1984 and 1986, Uribe was elected to the Medellin City Council as a member of the Liberal Party. He followed this with a stint as a senator between 1986 and 1994 before returning to Medellin to become Governor of Antioquia in 1995.

By then, Uribe had been noticed by the US Defense Intelligence Agency (DIA) that named Uribe on a list of prominent Colombians involved in the drug trade, according to documents declassified at the request of the National Security Archive in 2004 when Uribe was president.

The report described Uribe as a “close personal friend of Pablo Escobar” and “dedicated to collaboration with the Medellin cartel at high government levels.”

Extract from US report linking Uribe to the Medellin Cartel

Uribe’s government dismissed the document and the administration of US President George W Bush, who was working with his Colombian counterpart at the time, said that the intelligence report was unverified. 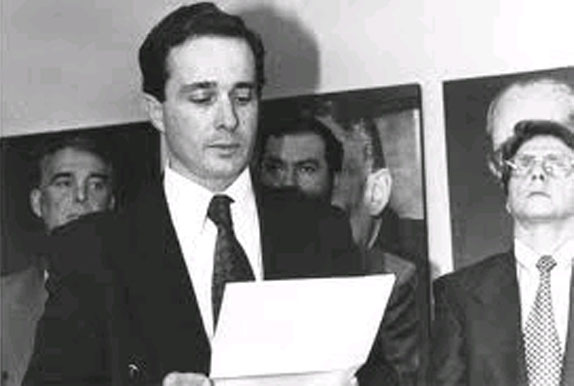 Uribe sworn in as governor of Antioquia

Uribe became governor of Antioquia in 1995, one of the most controversial periods in his life.

Although Uribe received plaudits for strengthening public health and education and investing heavily in infrastructure, his time as governor is best remembered for his enthusiastic advocacy for controversial CONVIVIR self defense cooperatives.

The governor signed off on dozens of these private sector security organizations, many of which turned out to be front companies for illegal paramilitary groups that were heavily involved in cocaine trafficking.

One of these groups was the “El Condor” cooperative of his neighbors, the Villegas family, who used the front company to seek legal financing to fund the “Bloque Metro” paramilitary groups with their neighbors, the Uribe and Gallon families.

Many of these “citizen defense groups,” including the Bloque Metro, evolved into paramilitary organizations and were banned by the national government in 1997. The organization they founded, the AUC, was determined a terrorist organization by the US in 2001.

Around that time, Uribe ended his long allegiance to the Liberal Party over the party’s support for President Andres Pastrana’s failed peace negotiations with the FARC.

After the spectacular collapse of the peace process in 2001, the former governor launched his own bid to be president.

Running on a hard-line security platform and promising to take the fight to the FARC, Uribe ran as an independent candidate backed by a broad coalition of disgruntled liberal elites and controversial splinter parties. He won the 2002 election in the first round with 53% of the vote. 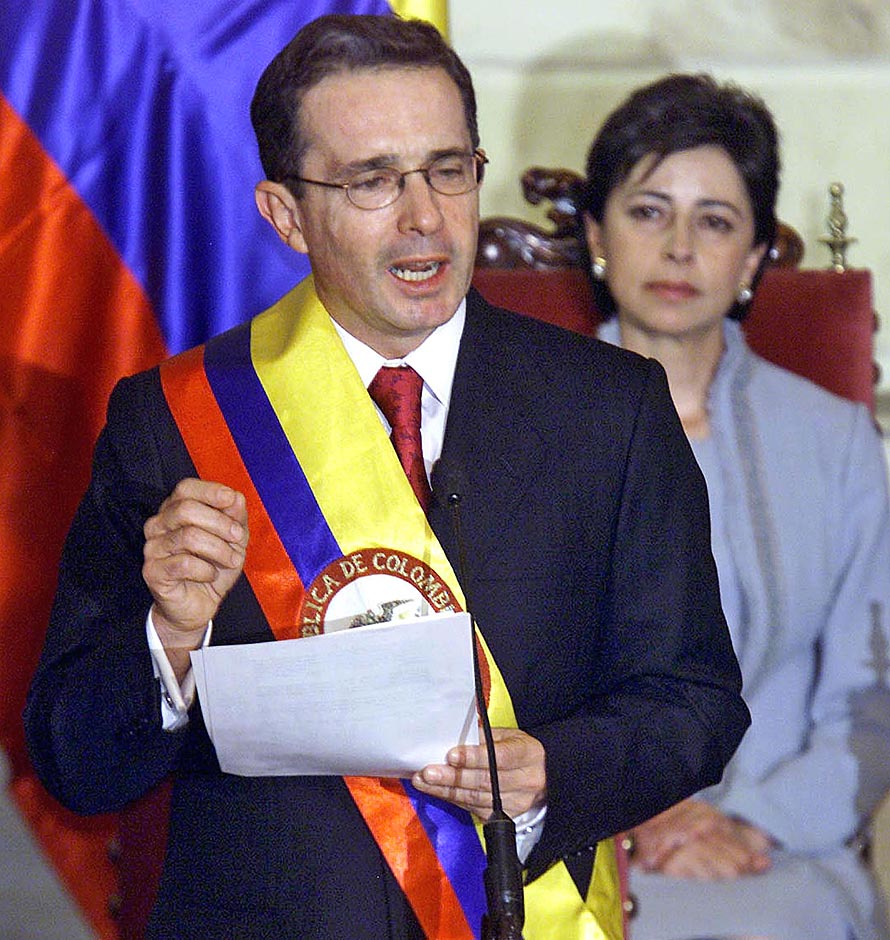 Alvaro Uribe after his swearing in as President

Taking advantage of the post-9/11 “War on Terror,’ Uribe changed his rhetoric, denying Colombia’s armed conflict with rebel groups like the FARC and ELN, and instead claiming that they were “narco-terrorists” challenging Colombia’s legitimate state,

Because the AUC also was deemed a terrorist organization, Uribe began negotiating their demobilization.

Supported by US funds through “Plan Colombia”, he invested heavily in the armed forces, stepped up the military assault against the FARC and ELN initiated under his predecessor Pastrana, and fiercely cracked down on leftist thought leaders and human right s defenders.

In 2004, Uribe aides bribed congressmen to amend the 1991 constitution that allowed the president to run again in 2006.

His attempts to secure impunity for the paramilitaries failed amid resistance from the courts and, reluctantly, the government agreed to the Justice and Peace law, which came into force in 2005, and forced the AUC to confess the truth and repair their victims.

Uribe’s attempt to shield the military, the private sector and himself from war crimes investigations triggered major criticism from human rights groups and victim organizations, and spurred some paramilitary mid-level commanders to dissent.

But as the transitional “Justice and Peace” justice process kicked off in 2006, allegations emerged of widespread collusion between the AUC, intelligence officials, top military commanders and politicians.

What became known as the “parapolitics” scandal consumed the Uribe family, many of his closest political allies and advisers, and a substantial part of his coalition in Congress.

In 2008, media exposed Uribe had used the mass killing of civilians to inflate his military successes. The brutal dirty war against critics and opponents by state officials ended Uribe’s reputation abroad and alerted the country’s judicial system.

When Uribe’s aides were found ordering intelligence agency DAS to spy on the Supreme Court that was investigating the president’s cousin Mario for his ties to paramilitary groups, the country entered an institutional crisis

Unimpressed, Uribe loyalists again tried to amend the constitution to the president to run for a third time, but this time the constitutional court stepped in and Uribe was forced to resign in 2010.

Despite the scandals, Uribe’s popularity remained high and he left office with approval ratings in the high seventies. 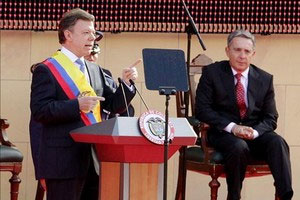 Ahead of the 2010 elections, Uribe discretely put forth his former defense minister, Bogota dynasty politician Juan Manuel Santos, as the man who would continue his policies.

The shrewd former Defense Minister won, but strained his relationship with Uribe after appointing vocal Uribe critics in his government of “National Unity.”

Worst of all, Santos appointed an Uribe critic as chief prosecutor who continued the prosecution of Uribe’s allegedly criminal family members and the former president’s criminal associates.

By the time of the 2011 local elections, Santos had removed Uribe’s allies from key government positions.

Left without a party, these elections saw major defeats for “uribista” candidates in key regions and Santos’ U party consolidated power.

When Uribe got wind that Santos planned peace talks with the FARC in 2012, the former president began mobilizing conservative and far-right supporters to discredit the president and the peace talks. while forming a new party that would allow him to oust his successor.

In January 2013, Uribe and his former vice-president Francisco Santos created the far-right Democratic Center (CD) party that described itself as “a group of citizens from differing political backgrounds — liberals, conservatives, from the U party, of the democratic left and without party, concerned about the present and the future of Colombia.”

During that year, Uribe and his party began a strong opposition to Santos.

After months of speculation, Uribe announced that he would be running for the Senate in the 2014 congressional elections and would allow former Finance Minister Oscar Ivan Zuluaga to run against the incumbent president.

Uribe became the first former president to be elected senator for the Colombian Congress, placing him directly into the influential legislative branch, recovering much of his influence in politics 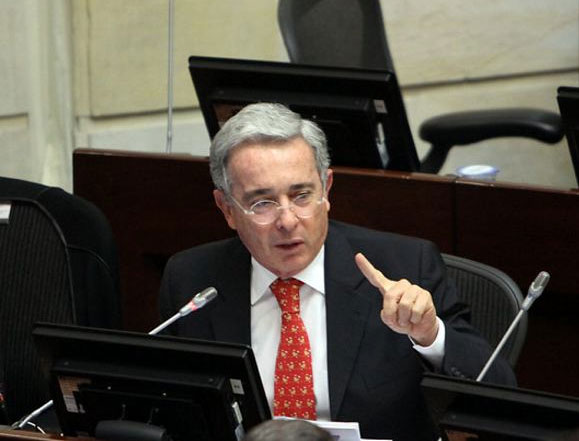 Alvaro Uribe during his second term as Democratic Center senator

After the voting of the March congressional elections had stopped and the tally counted, the year-old CD gained 20 seats in the Senate party and became the largest opposition party.

In his victory speech on election night, Uribe continued to criticize the FARC peace talks and vowed that Zuluaga as president would radically change course.

Uribe’s protege — in spite of scandals that included illegal spying on the peace talks — won the first round of the elections, but failed to win the second round as political forces from the center and left united to endorsed Santos in order to save the peace talks.

Since then, Uribe used the Senate floor and hyperactivity on Twitter to fiercely oppose his successor’s policies.

Nevertheless, Santos succeeded in signing a peace agreement with the FARC in 2016 and, against Uribe’s will, a peace process was set in motion.

The 2018 elections provided another chance to increase Uribe’s power, had it not been for the Supreme Court.

A month before the congressional elections, the court announced a criminal investigation into the alleged tampering of witnesses who had testified Uribe was one of the founders of the Bloque Metro when he was governor of Antioquia.

Uribe announced his resignation as the CD’s senate chief, claiming he was “morally impeded” to lead his party. A few days later, Uribe retracted his decision and announced he would stay on.

The damage was done though and his party lost seats in the March congressional elections. But Uribe’s latest disciple, former Senator Ivan Duque, did succeed to win the presidential elections in June.

Because Duque was unable to obtain a majority in Congress, the “uribistas” were unable to rewind the peace process as promised ahead of the elections.

Duque’s approval rating plummeted and the Supreme Court formally filed criminal charges against Uribe in 2020, ejecting him from politics while allowing the former president to prepare for trial under house arrest.