The Democratic Center is a far-right Colombian political party formed by former President Alvaro Uribe to secure the continuity of his political legacy. The party is in opposition to the “coalition of national unity” led by President Juan Manuel Santos.

As one of the newest members on Colombia’s political stage, the party still has a way to go to prove itself as a stable political force.

However, as a coalition it rides upon the momentum of well-established and influential political leadership by its leader, Uribe, whose political legacy is praised by a large minority of Colombian voters.

The shaping of this legacy of booming economic growth and military victories over leftist armed groups like the FARC and ELN began at the beginning of this century, when Uribe challenged the opposition Liberal Party leadership in the bid for the 2002 elections.

Until 2002, Colombia’s politics were dominated by two parties, with the pendulum of power passing control back and forth between the Bogota-based Conservative and the Liberal parties. Regional parties had previously tried to win seats in Congress, but with little to no success. 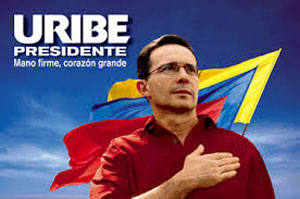 Uribe — then a former governor from the economically powerful Antioquia state — and a number of loyalists broke with the Liberal Party to found Colombia First. The party was Uribe’s formal endorser during the 2002 campaign, but has not taken part in elections since then.

Around the same time, a patchwork of locally-endorsed parties from all over the country formed to take part in the Congressional elections also held in 2002. Both the Liberal and Conservative Party lost a great number of seats to the new-wave candidates in those elections.

The vote, however, was marred by voter intimidation and coercion of candidate officials by paramilitary groups who were active in the same regions as the candidate senators and representatives.

The AUC boss at one point claimed to have one third of Congress in the pocket. Dozens of these congressmen, including Uribe’s cousin, were convicted and imprisoned. 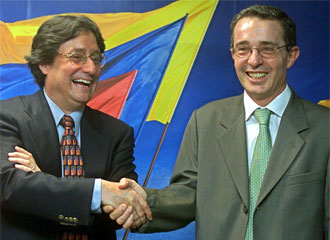 The presidential vote held later in 2002 brought the former mayor of Medellin and governor of Antioquia to the country’s highest office. He chose First Colombia president Francisco Santos to be his vice president.

Uribe and his coalition of mini-parties broke the old two-party hegemony, ushering in a new period of coalition governments.

The Conservative Party did join the coalition while the liberals again took seat in the opposition benches.

Traditional Bogota Liberal elite politicians like Juan Manuel Santos an German Vargas left with Uribe. The electoral drain at the elections cost the Liberals more than half their seats in the Senate.

The U Party, Uribe’s party 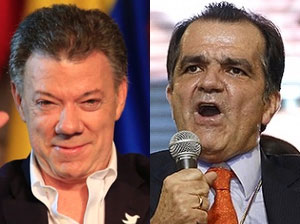 Santos and businessman-turned-Senator Oscar Ivan Zuluaga formed the U Party in 2005 as a platform to provide less fragmented and crime-ridden congressional support for Uribe’s presidential bid in the 2006 elections.

With the clear support of Uribe, Santos used the U Party political machine for his successful 2010 presidential campaign. With a discourse stressing he would continue Uribe’s policies and the newly-found U Party being the largest in Congress, Santos took office on August 7, 2010.

One of the biggest warning signs of a schism was the fact that, following years of fighting with the high court over his allies’ ties to paramilitary groups, the Supreme Court refused to pick a Prosecutor General from a shortlist handpicked by the president. Before the issue was resolved, Uribe left office.

When Santos took office, he immediately submitted his own Prosecutor General shortlist. The court then picked Viviane Morales, a long-time political enemy of Uribe, and indictments over paramilitary ties, abuse of power and corruption began arriving at Uribe loyalists of the highest order.

Citing the creation of a “coalition of national unity,” Santos invited Uribe’s former Liberal Party to the coalition and appointed several known political enemies of Uribe to his cabinet. 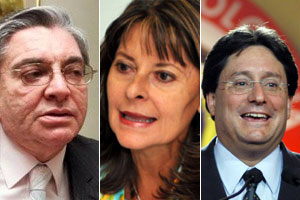 Having lost control over the government and Congress, and facing a hostile prosecution, Uribe founded the political movement that would later become the Democratic Center with senior Conservative Party politician Marta Lucia Ramirez, his former vice president Francisco Santos (a cousin of the president), and controversial former Interior Minister Fabio Valencia. The party was officially born on January 20th, 2013.

It became clear from the outset that this wasn’t just another voice on Colombia’s political stage, but a voice dedicated to opposing the Santos administration and his “coalition of national unity.”

The very first convention as an official party was focused on rejecting Santos’ then consideration of a ceasefire with Colombia’s rebel groups and to urge the administration to reject an International Court of Justice ruling regarding sea territory off Colombia’s shores.

In the 2014 elections, the party displayed a great deal of success, coming away from the elections with almost 15% of the common vote, 19 seats in the senate and 12 seats in the house of representatives.

The presidential elections later in the same year saw the party’s presidential candidate, former U Party founder Zuluaga, give incumbent Santos a bit of a scare, winning the first round and garnering 45% of the second-round vote. This set the party up as a force to be reckoned with in Colombia’s political scene. The combined legacy of the party’s leading elites and on-the-ground success validated the efficacy of the Democratic Center.

The Democratic Center party sits more on the conservative end of the political scale than the centrist position that the name implies, but officially describes itself as “a group of citizens from differing political backgrounds — liberals, conservatives, from the U Party, of the democratic left, movements without a political stance, concerned about the present and the future of Colombia.”

The party is well known for its espoused continuance of Uribe’s hard-line approach to leftist rebels. It stands as a tower of unwavering political resistance of the talks in Havana and seeks to promote solutions to the conflict that maintain complete state superiority, allowing less concessions to the unpopular guerrillas.

Uribe and his fellow senators have called for “peace under conditions” and “peace without immunity,” stressing that Colombia needs justice if it wants peace. At the same time, the former president has expressed an almost unconditional support for the armed forces and has opposed post-war scenarios where also the army is made to respond for human rights violations. According to Uribe, the army can not be tried the same way as the guerrillas.

Economically, the party aligns with fiscally conservative movements around the world and doesn’t stray far from Uribe’s original U Party that also considers foreign investment one of the most important fuels needed for the development of the Colombian economy. Also in terms of healthcare and education the party hasn’t taken a position different from that of Santos.

Unlike the Conservative Party, which is 100% Catholic, Uribe and his congressional team have been friendly with both the Catholic Church and Evangelical leaders, maintaining a Christian stance on issues as abortion, gay marriage, drug use and euthanasia. In this, the Democratic Center did take distance from the U Party which has been in favor of decriminalizing drug consumption.

However, it is clear that, as with the strong objections to the peace talks, “Uribism” is often the party’s political stance. With former president Uribe at its head and now representing the party in the senate, the party is a vessel for continuing his presidential legacy on Colombia’s political stage.

Uribe’s preeminence within the party was displayed in the party’s rejected attempt to have his face and name be a part of the party logo ahead of elections.