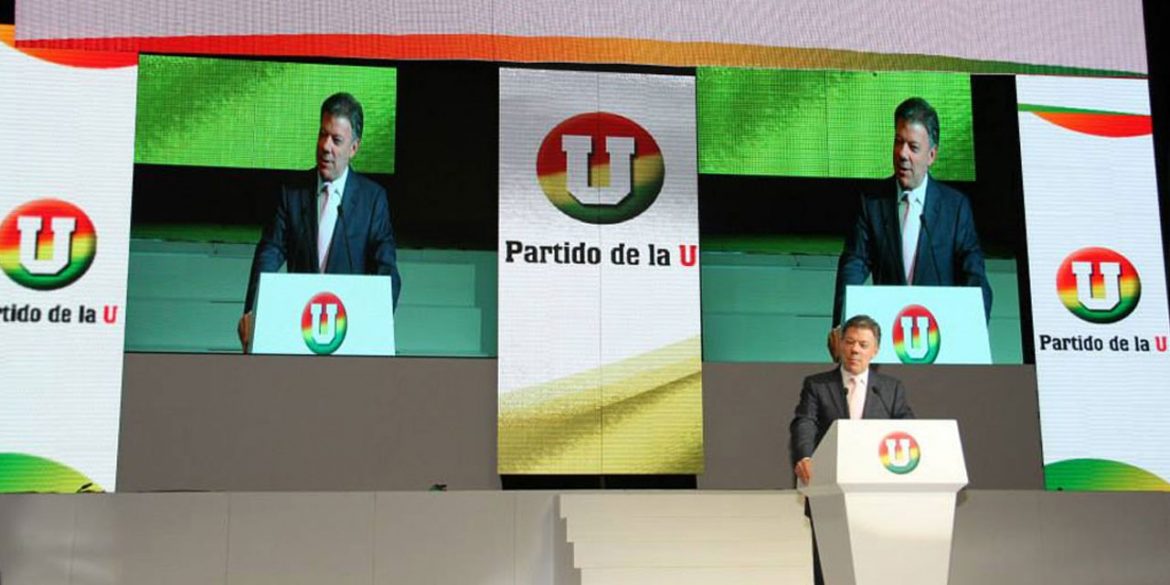 The Social Party of National Unity, or simply the U Party, is one of Colombia’s most successful political parties in modern history, and a member of President Ivan Duque’s coalition.

The U Party officially came to being on August 31, 2005, but the political coalition which stood behind its birth took shape years before.

An internal rupture within the long-established Liberal Party prompted the emergence of a new political force that has since been President Juan Manuel Santos’ strongest supporter in Congress and his presidential bids.

At the end of the 20th century, the Liberal party, which had dominated the Colombian political landscape for the greater part of the 1990s, plunged into a crisis.

The disgraceful 1994-1998 presidency of Ernesto Samper who had received millions of dollars from the Cali drug cartel for his presidential campaign, resulted in a severe loss of popular support for the Liberals.

The party’s fall from grace generated trouble within its ranks. Just before the 2002 parliamentary elections, newly rising politician and former Governor of Antioquia Alvaro Uribe left the Liberal Party over a feud with party mogul Horacio Serpa, a controversial ex-minister who — like Uribe — aspired to be president later that year.

Soon after, Bogota elite politicians such as Juan Manuel Santos and German Vargas, both descendants of Liberal presidents, followed the rebellion, leaving the party in shambles. The fellowship of Uribe was going to take over the political game in Colombia.

Uribe won the 2002 elections and the Liberal Party was forced into the opposition.

For the first time since the dictatorship of General Gustavo Rojas in 1957, Colombia’s presidency was occupied by a politician who did not run with the institutional support of either the Liberal or Conservative Party.

Uribe was supported in Congress by the Conservative Party, Vargas’ Radical Change party and a patchwork of smaller political factions. These parties had mostly emerged from regional politician dynasties, some of which in collaboration with paramilitary organization AUC.

Foundation and support for Uribe 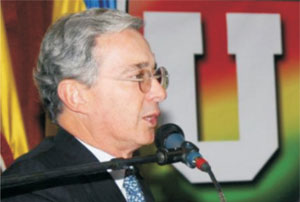 In order to unify the fragmented political support base for Uribe ahead of the 2006 elections, Santos established the U Party in 2005, changing its hitherto name the New Party.

Not all supporters of the then-president joined the initiative. Most notably, the Radical Change party decided to retain its independence, rejecting the partisan leadership of Santos, who they believed to secretly plot against Uribe.

The U Party was an alliance formed by veteran politicians as well as newcomers united to pass the electoral threshold and benefit from additional votes earned through their support of the figure of Uribe.

The party brought together a diverse collection of politicians such as members of the recently emerged Living Colombia Movement, independent congressmen like Gina Parody, leaders of youth movements such as Nicolas Uribe and members of civil society (given as much as 40% of space on the lists), as well as more traditional politicians formerly associated with the Liberal Party.

With Santos at the helm, the U party won the congressional elections of 2006. Two months later, Uribe secured his re-election and the president kept an overwhelming control over Congress.

Things soon took turn for the worse however. Uribe’s decision to include both party leaders, Santos and Oscar Ivan Zuluaga, in the new cabinet considerably weakened the party at the base.

The two failed to reproduce the organizational skills characteristic to Santos’ leadership, which contributed to the growing lack of cohesion between different political options across the cabinet and senate.

One of the party’s biggest crisis would follow at the beginning of 2007 when several U Party congressmen and other politicians were indicted on suspicion of colluding with AUC, a paramilitary group responsible for killing tens of thousands of Colombian civilians.

A wealth of high-profile names suspected and later convicted for their ties with AUC have been expelled from the party immediately after the scandal, including the party’s president, Carlos Garcia, who was later absolved of charges.

However, the negative label of being a paramilitary-aligned party was harder to remove. It became apparent that the lofty ambitions with which the party entered politics just a few months earlier, such as to “consolidate democratic institutions”, to recover “political trust from the public opinion” and to become “the best political alternative in the country”, remained little more than empty promises.

Following the scandal, a group of prominent U politicians formed a dissident faction, criticizing the party’s new leadership and expressing their intentions to leave the organization. Although the majority of the mutineers never actually abandoned the party, the differences of opinions within the party left its founding motto, “Unity comes first,” looking ever more bleak.

The rupture at the wheel

The most crucial schism happened at the very top of the movement. After a successful spell as the Minister of Defense, during which the government has recorded serious advancements in the war against rebel groups FARC and ELN, Santos decided to leave his post in 2009 to prepare for the 2010 presidential elections.

In the wake of the Constitutional Court’s ruling not to grant incumbent Uribe the chance to run for a third consecutive presidential term, the notion campaigned for by the U Party apparatus under its new boss, former Peace Commissioner Luis Carlos Restrepo, Santos announced his intention to replace his former boss as the head of the state. 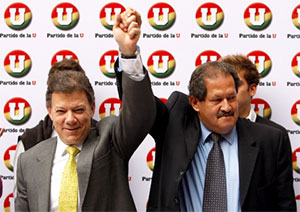 At the same time, the soon-to-be president worked on tailoring the party’s profile to serve as his own support base, affirming his intention to continue the work done by Uribe during the eight years in the presidential palace. It was the last strand of cooperation between the two most prominent Colombian politicians of recent times that gave the U Party electoral victory in the 2010 congressional elections.

As for presidential elections of the same year, Uribe unofficially endorsed Santos’ candidacy at first, but saw himself marginalized after the newly elected president betrayed his former superior almost immediately after taking office and charted his own course as the president of Colombia.

Instead of granting government positions to politicians from Uribe’s political support base in the regions, Santos re-united the Liberal Party families from Bogota that had separated in 2001 and 2002 and appointed new ministers critical of the former president.

The Conservative, the Liberal and the Radical Change parties joined Santos’ “Coalition of National Unity,” leaving Uribe loyalists out of the political machine.

Accusing Santos’ liberal policies and of betraying Uribe’s legacy by initiating a peace process with FARC while criminally persecuting former allies, Uribe launched a new political party, officially freezing his relationship with the former support group the U Party. Some influential names like the president’s own cousin, Francisco Santos, followed Uribe to his new Democratic Center Party.

From now on, the U Party was entirely in Santos’ control. And just as with Uribe before, the electoral success of the party relied almost entirely on the allure of the new president as the ideological mentor. The coalition led by the U and Santos himself was now also synonymous with a clear cause; Peace.

In effect, the party underwent an ideological shift of the leadership away from the conservative and belligerent politics of Uribe, towards a more “progressive” and “third way” brand of politics represented by Santos. 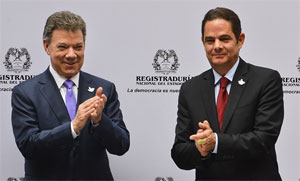 It was the drive for peace that saw both the Coalition of National Unity and Santos win their respective elections in 2014.

Although Colombia’s governing coalition emerged from elections with its congressional majority intact, it did see its advantage shrunk by the arrival of Uribe’s new party, the Democratic Center.

For the U Party it was its third consecutive electoral victory in congressional elections. Between 2006 and 2018, the party has won everything there was to be won in the Colombian political landscape.

By 2018, the party had lost its momentum and was forced to accept a major defeat in the legislative elections held in March that year.

When Uribe protege Ivan Duque, a fierce opponent of the country’s peace process, won the presidential elections in August, the party split.

The majority of the U Party wanted to stay in government, but senior senators like Roy Barreras and Armando Benedetti resisted, mainly because of Duque’s anti-peace policies. Under their leadership a dissident faction formed within the party that has vowed to vote against the party line when it comes to the peace process.