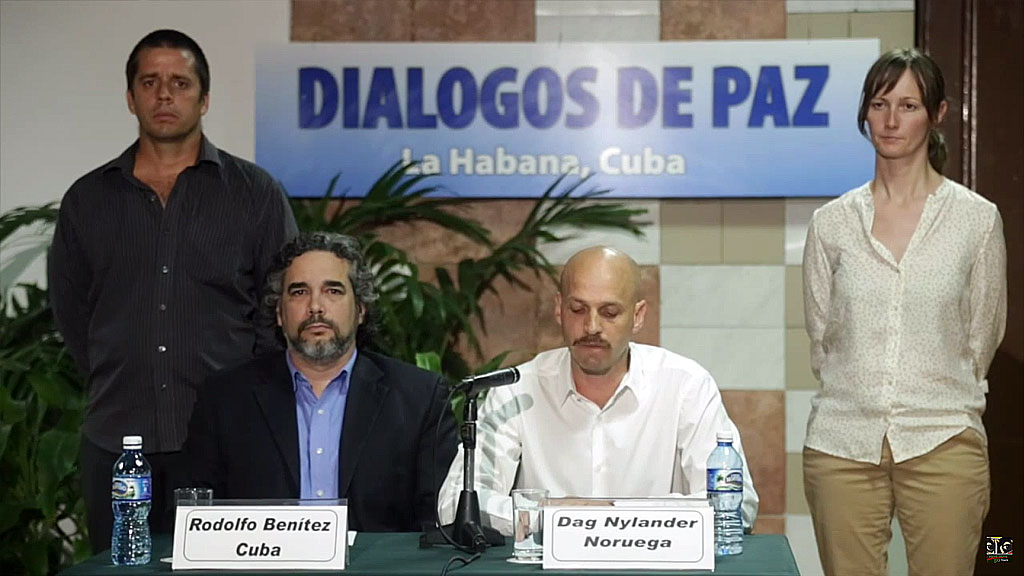 Cuba and Norway, the two countries acting as guarantor of Colombia’s ongoing peace talks, on Wednesday urged the Colombian government and rebel group FARC to agree to a bilateral ceasefire and put an end to an ongoing escalation of violence.

At a press conference in Cuba where negotiations are taking place, the Norwegian representative, Dag Nylander, and his Cuban counterpart, Rodolfo Benitez, expressed their “profound concern with the current escalation of violence” and said to “regret the loss of lives this has cost” in what should be the final stretch of the talks that began in 2012.

“We call on the parties to continue their efforts on finding a negotiated solution to the remaining issues, including reaching an agreement on a definitive bilateral ceasefire and cessation of hostilities,” the two officials said at a press conference in Cuba.

“Never before has Colombia been closer to finding a peaceful solution to the armed conflict,” Nylander said in English and Benitez then repeated in Spanish.

According to the diplomats, “the achievements made at the talks with important agreements on three agenda items need to be preserved.”

For the first time since the beginning of the talks in November 2012, the guarantor countries talked to the press on their own governments’ behalf.

Until now, the two countries only spoke to the press to read joint communiques signed off on by both the government and FARC delegations.

Pressure on Santos to agree to bilateral ceasefire

The statement puts enormous pressure on the Colombian government which has now become the only party involved in the talks to reject an end to hostilities that have cost the lives of more than 40 guerrillas, allegedly including a FARC peace negotiator, in the past few weeks.

The Cuban / Norwegian statement followed the gradual falling apart of mutual efforts to deescalate the conflict that has displaced more than a 1000 people in west Colombia in recent weeks.

The reversion of a December agreement to deescalate the violence and prioritize a bilateral ceasefire began with a surprise attack of a FARC unit on a nearby stationed army unit in the southwest of the country that killed 11 soldiers, confusingly violating a unilateral ceasefire called by the group’s own leadership in December.

As a response to the massacre, Santos ordered the resumption of air strikes he had suspended five weeks before. The country’s chief prosecutor accused the FARC of having violated international humanitarian law while the country’s inspector general began an investigation into members of the military, including the commander of the unit that was attacked.

When 27 guerrillas were killed in an airstrike in the west of the country, the FARC also resumed hostilities, killing at least three members of the security forces and injuring at least another four.

The violence generated a number of mass displacements of civilians trying to flee the war.

The state of the talks

Negotiations to end the war that has left more than 7 million victims have been ongoing since November 2012.

During these negotiations, partial agreements were signed on rural reform and political participation, both considered the main causes of the conflict, and drug trafficking, which has fueled the violence since the 1980s as it provided the necessary revenue for the FARC and government-aligned paramilitary groups to finance the war.

The two teams are currently negotiating how to compensate the victims, how to achieve justice for the tens of thousands of crimes committed by both parties, and how to reintegrate demobilized FARC fighters in the event of a final deal.

However, no progress on the substance of the negotiations agenda has been reported since May last year.