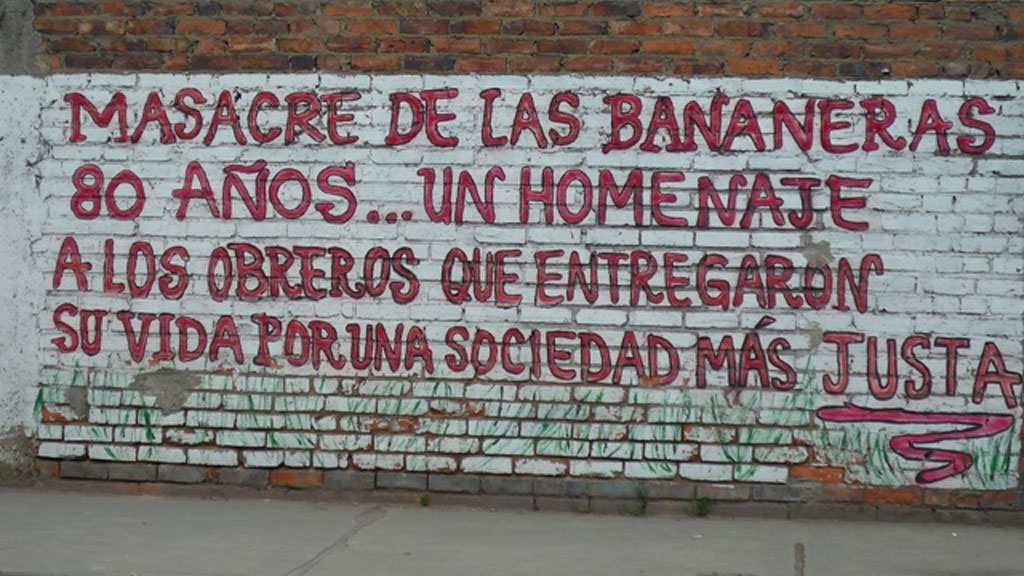 Compared with much of the world, Latin America was relatively free of inter-state wars during the 20th century, and Colombia is no exception.

While tension with neighboring countries, particularly Ecuador and Venezuela, increased during the hardline administration of Alvaro Uribe, much of the violence experienced in Colombian society comes from domestic actors.

These domestic groups responsible for violence have, however, arisen in a context in which international forces have played a significant role in augmenting their the strength and objectives. The two of the most important forces that have contributed to the Colombian conflict are multinational companies and the United States.

As with drugs, rather than call these actors a “cause” of the conflict, it is more accurate to view them as contributors. Structural factors, such as political exclusion, inequality, and a weak state presence can be seen as fundamentally creating the context in which international forces would become involved.

The banana massacre of 1928

Famously fictionalized in the Gabriel Garcia Marquez’s iconic novel One Hundred Years of Solitude, the banana massacre of 1928 was an all-too-real historical event that demonstrates well the role international corporations have played in Colombia.

The United Fruit Company was created in 1899 and had a virtual monopoly on the banana trade in a number of Central American countries. These small nations, such a Guatemala and Honduras, were to be called “banana republics” due to the power wielded by the company over their economy and politics. A number of high-ranking US officials had direct ties to the company. John Foster and Allen Dulles, who would go on to head up the State Department and the CIA for Eisenhower in the 1950s, were both on the company’s payroll for more than three decades.

By 1928, the company employed some 30,000 Colombians on the Caribbean coast, according to historian and Razon Publica editor Nicolas Pernett. Most of these workers, however, were hired via contractors and only a few hundred were legally contracted by the company. To formalize their labor relations with United Fruit, and to demand better work conditions and increased pay, the workers went on strike.

Cables sent by then-US Ambassador Jeffrey Caffery show the the strike was seen as a threat to “American interests” and as “subversive.” He was in regular contact the United Fruit Company’s representative and even requested that Washing send an American warship to be put on alert should the company’s property or the 20 Americans then in the vicinity be threatened.

The company refused to negotiate with the workers and the Colombian government, then ruled by the Conservative Party, viewed the strike a violation of public order, sending in the national army to quell the unrest. When strikers, viewed as “bands of Communists” by the Colombian government and US ambassador, failed to disperse, the troops opened fire. It is unclear how many died. The Colombian army said the figure was only nine, but a US cable shows that United Fruit believed it to be more than 1000. A month after the massacre, Caffery told Washington: “I have to honor to report that the Bogota representative of the United Fruit Company told me yesterday that the total number of strikers killed by the Colombians military exceed one thousand.”

Rather than condemn the massacre, the US embassy was privately conveying to Washington that it fully supported the government’s tactics and derided the Liberal Party’s press for “ugly words…such as murderer and assassin” and “insidious campaign” against the government. Ambassador Cafferey believed that “the thinking people of the country realize that it was only the Government’s prompt action that diverted a disaster.”

The scandal of the banana massacre would contribute to the fall of the Conservative government and the rise of Jorge Elicier Gaitan, a lawyer whose fiery speeches against the company and the government would bring him great popularity among the Colombian masses. Many mark his assassination in 1948, which set off the Bogotazo violence in the country’s capital, as the beginning of Colombia’s modern civil strife.

US cold war policies in Colombia

Long before the rise of the US-funded War on Drugs in Colombia, Cold War-minded American officials were becoming increasingly involved in the country. A “Special Survey Team” made up of “counter-insurgency” experts was sent in 1959 to investigate the security situation in the country after nearly a decade of La Violencia which left more than 200,000 dead.

Three years later, a Special Forces general named William Yarborough returned to the country for a second assessment. He recommended that “civilian and military personnel” be selected for “clandestine training in resistance operations” should the security situation deteriorate. He said this structure should be “used to pressure toward reforms known to be needed, perform counter-agent and counter-propaganda functions and as necessary execute paramilitary, sabotage and/or terrorist activities against known communist proponents. It should be backed by the United States.”

This was policy was eventually articulated in a Colombian decree in 1965 which stated that “all Colombians, men and women…will be used by the government in activities and work that contribute to the reestablishment of order.” Becoming a law in 1968, it would be legal rationale given by the armed for working with paramilitary actors, the deadliest forces in Colombian society.

Using Yarborough’s recommendations, Plan Lazo was launched providing aid and training to the Colombian military. US support was present when the military attacked one of the Communist “independent republics” set up in the neglected areas of the Colombian countryside. The FARC’s founder, Manuel Marulanda Velez, was part of the 48 armed men in the community of 1,000 known as Marquetalia who dispersed during the attack, only to go on to found the rebel group that is now in its 50th year.

American involvement in Colombia and its decades-long conflict cannot be understood without a treatment of the initiative known as Plan Colombia.

Bill Clinton unveiled the $1.3 billion plan – mostly military aid – in 2000, which at the time made Colombia the third biggest recipient of military aid after Israel and Egypt.

While initially peace and development plan put forward by the Colombian government, according to former US diplomat Robert White, it became an anti-drug trafficking place focused on military aid and fumigation once the US revised the plan. The US was so central to its framing of the plan that it was reported that it wasn’t even written in Spanish until months after it was drafted.

“They come and ask for bread, and you give them stones,” White told a Canadian publication in the year the plan was launched.

In 2002, President Alvaro Uribe  – a hard-line, right-wing politician from the paramilitary-saturated region of Antioquia – was elected. His was a close ally of the Bush administration and was fully-backed by the United States as he ramped up the military offensive against the FARC using American aid in his policy known as “Democratic Security.”

Many in the US see Plan Colombia and Uribe’s offensive as a success, as the guerrillas were indeed hit hard and are currently about half the size as in 2002. The price, however, was enormous.

As WOLA analyst Adam Isaacson, one of the mostly knowledgeable experts on US-Colombia security policy, has written, “Colombia’s security gains are partial, possibly reversible, and weighed down by ‘collateral damage.’”

One obvious problem with the initiative was that it focused only on the threat posed by the FARC while ignoring the widespread human rights abuses of the government the countless massacres perpetrated by the paramilitaries with direct ties to the military. The United Self-Defense Forces of Colombia (AUC) were a US-designated terrorist organization that existed between 1997 and 2006. As Doug Stokes has pointed out, US agencies themselves recognized that the AUC was even more heavily involved in drug trafficking and committed most of the human rights abuses in the country, yet the aid was given directly to state forces colluding with the group.

In 2013, a report by the Washington Post detailed the aid provided by US intelligence in the fight against the FARC. Key support was provided for some widely-hailed operations which struck crippling blows to the guerrillas. The author also notes that, “for the most part, they left the violent paramilitary groups alone.”

A landmark study released in 2009 by two academics studied the effects of US military aid on violence and democracy (political participation) in Colombia. It concludes that US aid lead to increases in paramilitary attacks and had no effect on guerrilla attacks. Voter turnout also failed in municipalities with military bases receiving US aid. Nonetheless, aid has continued to this day, though at reduced levels since 2008.

Another problem was that literally hundreds of members of the government had had direct ties to paramilitary groups. During the “parapolitics” scandal, nearly a third of Colombia’s Congress was under investigation for their ties to the deadliest terror group in the country. It was eventually revealed in 2009 that the Colombian government intelligence agency DAS was also working with paramilitaries, in addition to spying on journalists and Supreme Court judges.

The Colombian military itself was also responsible for some of the worst atrocities during these years. The “false positives” scandal was one of the worst cases. It centered around the extrajudicial killings of thousands of civilians by members of the armed forces who dressed their victims as guerrillas in order to present them as combat kills.

To date, the Prosecutor General’s office has identified more than civilian 4,000 victims, most of them happening during the time of Plan Colombia and during Uribe’s administration. In 2007, more than 40% of the reported combat kills were in fact simply murdered civilians.

While perhaps the main stated objective of Plan Colombia was to reduce the flow of drugs to the US, Isaacson argues that this was not achieved.

“Faced with fumigation, coca-growing families, with no other way to make a living in stateless areas, adjusted their cultivation patterns to make similar amounts of cocaine. The policy proved not only to be cruel – spraying chemicals over rural households, usually with no food-security or development assistance – but the numbers showed it to be ineffective, too,” Isaacson wrote in 2010. Manual eradication proved to be more effective, though he argues that increased state presence and economic opportunities are still the best option.

While the US government has aided the Colombian state in its offensive against leftists guerrillas, multinational corporations have also been directly tied to right-wing paramilitary death squads. It is a nexus which by now is widely recognized to have been key to the expansion of various international business interests in Colombia.

During the height of the violence in the 1990s and early 2000s, multinationals used paramilitaries for security services, worker intimidation, and to displace small landowners from their property. The AUC, in addition to doing the bidding of various companies, was also virulently anti-Communist, anti-FARC, anti-union, and did hesitate to murder or commit massacres against any suspected of helping the leftists rebels or simply harboring leftist sympathies.

Among the companies accused of having had relationships with the paramilitaries, and specifically the AUC, are mining companies Drummond and Glencore; Nestle and Coca Cola; and a host of African palm oil corporations (19 were indicted by the Prosecutor General’s office in 2012), among others.

Demonstrative of the fact that many of the same structural problems of Colombian society that have fomented violence over the years still exist is the case of multinational Chiquita.

The exact same multinational company, after so many, was still using reactionary forces known to have massacred innocent people in order to protect its own business interests.

As Razon Publica’s Pernett has written, “this is why is can be said that the banana massacre was not simply an isolated incident in the political and economic history of the country, but rather the realization of a ‘business model’ that has continued up until the present.”

This fact, combined with the US’s aid to an army colluding with the paramilitaries and often participating in its own atrocities, are another key aspect of understanding the Colombian conflict.