While not widely considered a cause, drug trafficking has played a mayor role in Colombia’s armed conflict as it has been the main source of income for the illegal armed groups involved in the violence.

In much of the world, Colombia is virtually synonymous with narco-trafficking. Cocaine, in particular, has become closely associated with this Andean nation, even though Peru took over is the world’s leading producer of the drug in 2012.

The relationship between narco-trafficking and violence in Colombia is a complicated one. On the one hand, virtually every observer recognizes that the trade has contributed in a significant manner to the Colombian conflict.

Undoubtedly, it has aggravated an already volatile situation by increasing the financial and armed power of illegal groups. On the other hand, it is hotly disputed whether the drug trade has been a cause of the conflict or simply a symptom of more structural problems.

Former President Alvaro Uribe and his followers tend to favor the former. The former president has often said the FARC is simply a narco-terrorist criminal organization that only seeks to increase its own power in Colombian society. Its supposed grievances and critiques of Colombian society therefore merit little to no attention in this view.

Another view tends to see drug trafficking in Colombia as a response to structural factors and a way in which leftists guerrillas and right-wing paramilitaries funded their struggles and/or operations.

The rise of narco-trafficking

The international drug trade did not become a significant phenomenon in Colombia until the 1970s with the increased demand for marijuana, particularly in the United States. By the 1980s, cocaine had become the most common substance to be illegally grown, processed, and trafficked.

Peru and Bolivia, who share Colombia’s Andean climate and prime conditions for the cultivation of coca, have also been key sources in the production of the drug.

Weak institutions failed to adequately respond to the phenomenon. They were unable to provide sufficient economic opportunities for those eventually drawn into the trade nor law enforcement to combat it.

Over the decades, the nature of the drug trade, those involved, and its role in the conflict has evolved. The actors have often had highly conflicting ideologies and maintained a range of relations with the state. An examination of each is helpful in understanding the role of the drug trade in the Colombian conflict.

Image of Avianca flight 203 that was taken down by the Medellin Cartel in 1989 (Photo: Palenque Tours)

The most infamous organization involved in narco-trafficking was Pablo Escobar’s Medellin Cartel. Part of Escobar’s legacy was the amount of violence he used in order to increase his own power and the profits of his business. Much of the violence emanating from the Medellin Cartel was related to its confrontation with the state and its rivalry with the Cali Cartel.

Though Escobar was briefly elected to Colombia’s Congress in the early 1980s, he is not viewed as an ideological figure. His power, though it extended into every sphere in which his criminal organization operated, was principally economic. One of his main goals was to change the Colombian constitution to outlaw extradition, something eventually achieved in 1991.

The drug cartels emerged out of a demand for an illegal product and the inability of a weak state to prevent criminal groups from involvement in the trade. While they have been a significant contributor to violence in Colombia, the nature of the organizations are rather distinct from other actors created out of explicit political and economic grievances with more defined ideologies. 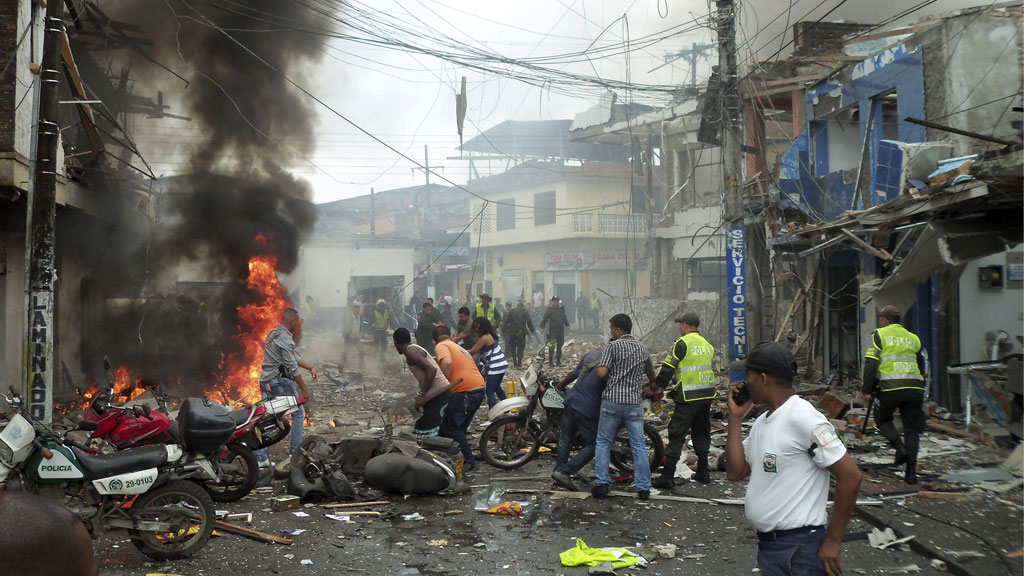 The town of Tumaco after a 2012 FARC bomb attack.

The FARC, the country’s largest rebel group, is a prime example. Though the FARC is now deeply involved in the drug trade, this relationship developed over time as the trade flourished with increased demand from the United States. The rebel group did not tax marijuana producers to fund its insurgency until the 1970s. It was not until 1982 that the group decided to begin its tax on coca producers. Kidnapping and extortion have also provided significant sources of income for the FARC.

InSight Crime, the go-to source on organized crime throughout the Americas, describes the group in the following manner:

“There is much discussion about whether this structure and modus operandi constitute a “cartel,” or a criminal organization. While it is true that parts of the FARC traffic in illegal drugs in increasing quantities, kidnap, extort, and partake in other criminal activities that undermine their mission, their overall structure, recruitment, modus operandi and purpose remain centered in political rather than financial returns. This makes it hard for InSight Crime to say they are simply a criminal enterprise.”

The ELN, Colombia’s second largest rebel group, also emerged in the 1960s with a Marxist-Leninist ideology and from the Liberation Theology movement within Catholicism. It increasingly relied on ransom from kidnapping and oil theft until the 1990s when it became more involved in coca taxation. This was the height of its power, with some 5,000 militants counted among its ranks. Thus, like the FARC, profits from the drug trade became a way to finance the ELN’s struggle. But the decision to become involved the trade, along with the decision to fund their fight with kidnapping and extortion, have proved detrimental to both groups’ popular support.

Right-wing paramilitaries, originating as armed defense groups funded by ranchers and power landowners, emerged at the height of the drug trade. Many of the leaders of the organizations came from or had close ties to Escobar’s Medellin Cartel, and took over much of the trade when it fell apart in the 1990s. The United Self-Defense Forces of Colombia (AUC) became arguably the largest drug trafficking organization in the world. These forces maintained close relationships with politicians and the armed forces, as became evident during the unfolding of the “parapolitics” scandal during which more than a third of public officials were investigated for their ties to paramilitaries.

Distinguishing the AUC from drug cartels was its ideological nature. It was closely tied to staunchly conservative political and economic forces in Colombia, including the landowning elites and multinational corporations (Chiquita, palm oil companies, and many others). While Escobar was swift to eliminate groups or individuals challenging his empire, the AUC’s execution of civilians included those whom it suspected of having a hint of leftist sympathies, from human rights defenders to teachers. But, it must also be noted, there existed an alliance between the two groups.

As InSight Crime writes, “the alliances with drug trafficking groups eventually made the paramilitaries indistinguishable from their bosses. The two allies also acted similarly in many respects beyond their business interests, including using their muscle and financial power to buy politicians and fund campaigns, as well as assassinate those who did not collaborate.”

Some scholars count the number of civil wars which occurred in 19th-century Colombia to be around 11 or 12. Other war estimates reach as high as 28. These occurred well before the rise of drug trafficking in the country.

The bloodiest period in Colombian history is known as La Violencia. The bloodshed, orchestrated by the Liberal and Conservative parties, started in 1948 with the assassination of charismatic political leader Jorge Eliecer Gaitan and continued until 1957 when the two elitist political parties signed power-sharing agreement known as the National Front. With more than 200,000 deaths, this violence occurred some two decades before narco-trafficking became a significant player in Colombian society.

Both of the dominant rebel groups, originating in the 1960s during the height of revolutionary armed struggle throughout Latin America, also predate the drug trafficking industry in Colombia. Thus, the drug trade alone does not suffice to explain their entrance into an armed struggle with the state.

But narco-trafficking cannot be ignored in any attempt at lasting peace in Colombia.

The FARC and the government, currently negotiating a peace deal in Havana, Cuba, have recognized the important role the illicit drug trade has played in the conflict. The two sides have already signed a preliminary agreement, one of five under negotiation, to deal with the issue.

Unfortunately, even if the deal is successful, the issue of the demand for drugs in the United States and Europe will still remain. And as long as drug production and consumption remains illegal, criminal organizations from Bolivia to Colombia are likely to dominate the trade and continue contributing to violence in these countries.