Underlying many of the problems which have led to or exacerbated Colombia’s conflict, from economic and land inequality to drug-trafficking, is the central problem of a weak state.

The absence of state institutions throughout much of the country, and corrupted institutions in population centers, has led to marginalized populations and parallel structures which have directly challenged the authority and monopoly on violence of the Colombian state.

One of Colombia’s most respected hirtorians and conflict analysts, Fernan Gonzalez, has written that one of the key phenomena in Colombian history that helps explain the conflict is the colonization of the peripheral areas of the country’s territory.

“Since the beginning of the sixteenth century,” Gonzalez continues, “the most isolated and inaccessible territories were settled by marginalized groups (such as poor whites, mestizos, Afro-Colombians, and mulatos). In these areas of peripheral colonization the organization of social relations was left to individuals and social groups, and the state lacked the monopoly on justice and the legitimate use of force.

”It was created, the historian argues, by a “constant expulsion of poor campesinos towards areas of unclaimed frontier…where the presence of the state’s regulatory institutions and interaction with the rest of society and the national economy was minimal.”

“Since the beginning of the sixteenth century the most isolated and inaccessible territories were settled by marginalized groups. In these areas of peripheral colonization the organization of social relations was left to individuals and social groups, and the state lacked the monopoly on justice and the legitimate use of force.

It is precisely in these areas of Colombia where the absence of the state created a vacuum in which alternative structures – local elite landowners, narco-traffickers, guerrillas, paramilitaries – have emerged to filled the empty space.

It can also be seen that this structural failure in state-making is closely related to the two other causes already discussed in previous articles: land inequality and political exclusion. These marginalized populations were never integrated into the Colombian political system and the failure to implement agrarian reform meant they were never brought in from the periphery of the economy.

In these conditions, it is easy to see how the “independent republics” emerged during in La Violencia of the 1950s. The government saw them as a challenge to the sovereignty of the state – no doubt with some justification – and instead increasing the state’s presence and providing social/economic development projects, decided to integrate them by force. The Communist rebels of the community of Marquetalia, routed by Colombian forces with the aid of the United States in 1964, would go on to create the FARC rebel movement, always operating in these marginalized areas. 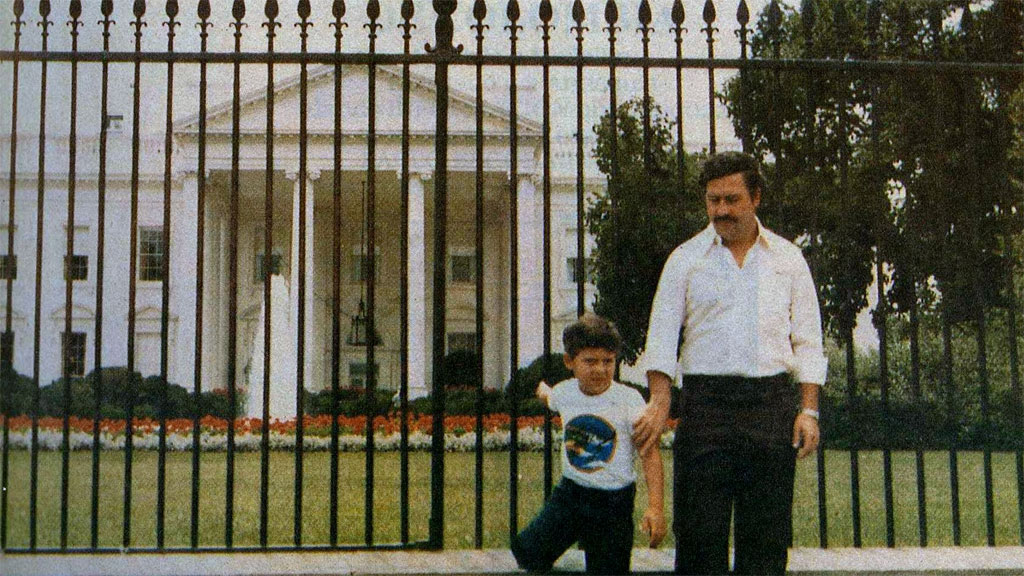 Pablo Escobar and his son visit the White House.

Another prime example of how the weakness of the Colombian state contributed to the conflict is the rise of Pablo Escobar’s cocaine trafficking empire.

Aside from being a criminal enterprise, Escobar’s cartel functioned in some ways as a state would: using its resources for social projects, to create order, expand its power, fight wars etc. And with Escobar’s business having accumulated billions of dollars by the early nineties, he was certainly in a position to carry out these functions.

As Medellin political scientist Juan Camilo Arias told Colombia Reports, “Escobar represented a kind of feudal structure in which he was the king and his domains he was the very emanation of law.”

He was a “kind of medieval patron” who “emerged precisely because of the poor institutional organization of the state.” As his own state, Escobar attempted to maintain a monopoly on force, confronting with violence those who attempted to challenge his authority within his domain.

Arias says that the “conditions for the emergence of narco-trafficking were already there when this problem emerged.” The increase in the demand for cocaine in the United States in 1980s simply fueled the rise of Escobar’s parallel structure.

Further weakening the Colombian state already weak presence and institutionality is the rampant problem of corruption. Transparency International, an NGO which monitors corruption around the world, ranks Colombia 94th out of 175 countries/territories on the Corruption Perceptions Index (2014).

According to the NGO, a staggering 80% of Colombians view their government as corrupt. A slight majority, 52%, think corruption is getting worse. Just 8% of the public entities evaluated by the NGO are considered to be a “low risk” of corruption.

Entrepreneurs view corruption as the biggest problem harming the competitiveness of private Colombian companies, according to a study by the World Bank. A poll by Transparency International and a Colombian university shows that some 93% of Colombian entrepreneurs believe businesses to be paying bribes.

Elections in Colombia are typically fraught with irregularities, compounded by the fact that state institutions are not strong enough to combat the influence of outside forces like the guerrillas, paramilitaries, and drug traffickers from influencing local elections.

The extent of the infiltration of illegal armed groups into the political system was exemplified by the “parapolitics” scandal in which more than 11,000 politicians, businessmen, public officials, and citizens were investigated for their ties to the United Self-Defense Forces of Colombia (AUC), which had been considered a terrorist organization by the United States.

More than 50 governors and lawmakers have been convicted of using the AUC to intimidate voters, with well over a 100 being investigated.

Though the AUC officially demobilized in 2006, the problem of still exists. A 2011 report by the International Crisis Group Summarized the situation: “Deeply entrenched connections between criminal and political actors are a major obstacle to conflict resolution in Colombia. Illegal armed groups seek to consolidate and expand their holds over local governments in the October 2011 governorship, mayoral, departmental assembly and municipal council elections.”

It is unlikely that much changed between then and the 2014 election.

The uneven and weak presence of the Colombian state throughout much of the territory of the country must be seen a fundamental cause of the the violence which has plagued this South American nation for decades.

An analysis by Gonzalez of the causes of the conflict sees the weak state as central, though he emphasizes that it is ultimately a multi-causal. To conclude with the series, it is worth quoting it at length:

“[There is a] need to think about a combination of multiple factors, different causes, various conflicts, which change shape even in different times and in different areas of the country…The conflict cannot be reduced to a single cause or a bipolar confrontation between adversaries clearly opposed by ethnic, religious or even political differences.”

“Therefore,” he argues, “it is essential to trigger a process of deep reflection of the entire population on the origins, causes and nature of the armed conflict, helping to gradually overcome the polarized looks and interpretations that have characterized the protagonists of this long conflict that afflicts us. But besides mutually disparaging glances of the adversaries, the country has to reflect, also, on the political, economic and social contexts in which they are inserted and expand the conflicting dynamics, to find solutions to the structural problems of socio-economic inequality and political exclusion that afflict the country, as well as to the problems of institutional weakness of the state, especially at local and regional level, where armed clashes usually occur and where most of the victims are found.”