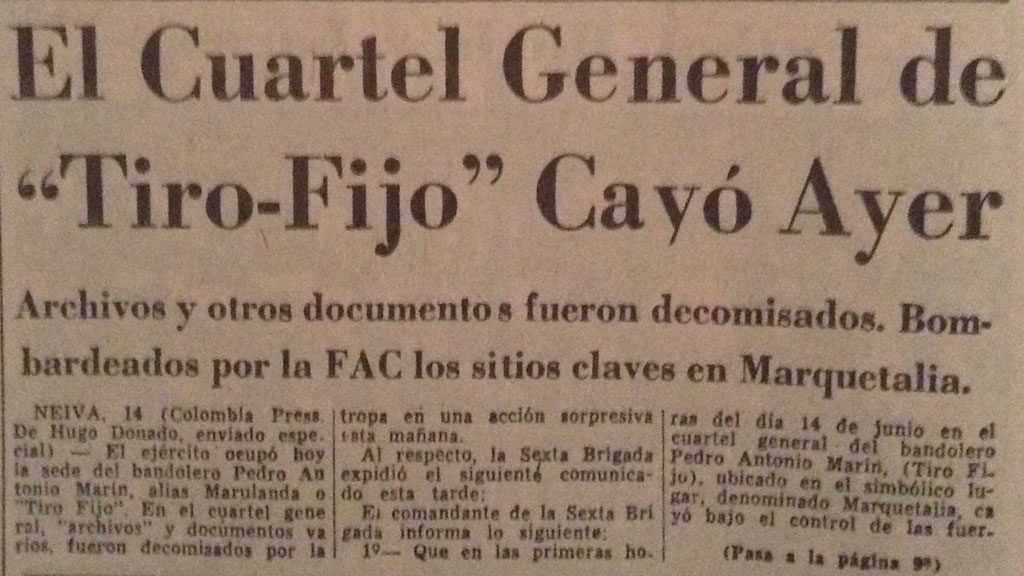 1964 announcement of the FARC's defeat
War and peace

Colombia’s largest rebel group, the FARC, on Wednesday commemorated its 51st anniversary, marking the beginning of the 52nd year of an armed conflict that has left more than 7 million victims.

The anniversary falls on May 27, the day that in 1964 some 18,000 Colombian soldiers carried out their first attack on a few dozen peasants who would subsequently call themselves the Revolutionary Armed Forces of Colombia (FARC) and would grow to become Latin America’s largest and longest-living rebel group.

This first undecided battle has since converted in an undecided war in which almost 300,000 Colombians were killed and more than 6 million have been forced from their lands.

In the last month alone, more than a 1,000 Colombians were forced to flee their lands because of the violence.

While peace talks have been ongoing since late 2012, the light at the end of the tunnel of the now-51-year-long war is still dim. Violence has escalated over the past few weeks while both the state and FARC negotiators appear entrenched in the final stretch of the talks.

What has been keeping the peace talks from culminating in an end of the conflict has been the debate on how to grant justice to the millions of Colombians who have been victimized by either the state, the guerrillas or state-aligned paramilitary forces.

Accords on the causes of the conflict, rural inequality and the political exclusion of the left, were reached within a year of negotiating. The FARC’s abandoning of drug trafficking — the guerrillas’ main revenue source for their uprising — was agreed upon in May last year.

However, since then the peace talks seem to have stalled entirely as both the rebels and the state refuse to take full responsibility for the war and can’t agree on the final two points on the agenda: Victims and End of Conflict.

The FARC has admitted responsibility for war crimes and has asked forgiveness for a 2002 massacre in which rebels killed 80 civilians while fighting paramilitary group AUC.

However, the rebel negotiators have consistently refused to accept prison sentences in spite of being accused of thousands of war crimes and human rights violations.

The administration of President Juan Manuel Santos, in charge for the talks, has yet to admit any state responsibility for the tens of thousands of war crimes carried out by either the military, paramilitary forces or state officials.

Moreover, the government on several occasions has tried to evade the effective prosecution of officials accused of (war) crimes that include the execution of thousands of civilians, inflating the perceived success against the FARC.

Meanwhile, skepticism among Colombians about the negotiators’ ability to bring the war to an end has been high and violence has peaked after a FARC unit surprisingly attacked a nearby stationed army unit last month, killing 11 soldiers.

This attack caused a chain reaction that ended in the Santos resuming air strikes he had previously suspended and the FARC ending their unilateral ceasefire, the most advanced concession to deescalate the conflict.

Paradoxically, this deescalation of the conflict was agreed upon in December last year exactly to disallow military action to disrupt mutual negotiation efforts and keep public opinion on the peace talks’ side in spite of fierce opposition from the conservatives in the opposition.

End to violence impeded by lack of trust

The FARC has long asked for a bilateral ceasefire, but this has consistently been denied by the government. Supported by public opinion, Santos has wanted to prevent the guerrillas abusing the absence of military pressure to regroup and continue warfare.

The FARC, in turn, has accused Santos of having abused its unilateral ceasefire to prepare its most recent attacks.

This mutual lack of confidence, and the apparent lack of will to assume responsibility has deteriorated the prospects of peace to the extent that, according to the country’s inspector general, the entire process is “in intensive care.”

On its anniversary, the FARC accused the state — according to the rebels run by an “oligarchy” that is subject to “American imperialism” — of having committed a war crime by executing injured guerrillas who survived a recent bombing of a FARC camp.

The prosecutor general has said the FARC committed a war crime carrying out last month’s mysterious attack while the inspector general asked the International Criminal Court to investigate more than 2,500 forced disappearances allegedly carried out by the FARC.

Colombians, who in 2012 were told that the negotiations would end before the conflict could reach its 50th anniversary, have since lost confidence in both the peace talks and their president whose approval rating has sunk to around 25%.

The FARC, calling themselves the People’s Army, can count on the approval of approximately 3% of the population.

The peace talks between the FARC and the Colombian state, two of Latin America’s worst human rights violators, has failed to prevent the war entering its 52nd year with no indication it might be over before the FARC can commemorate its 52nd anniversary on May 27 next year.