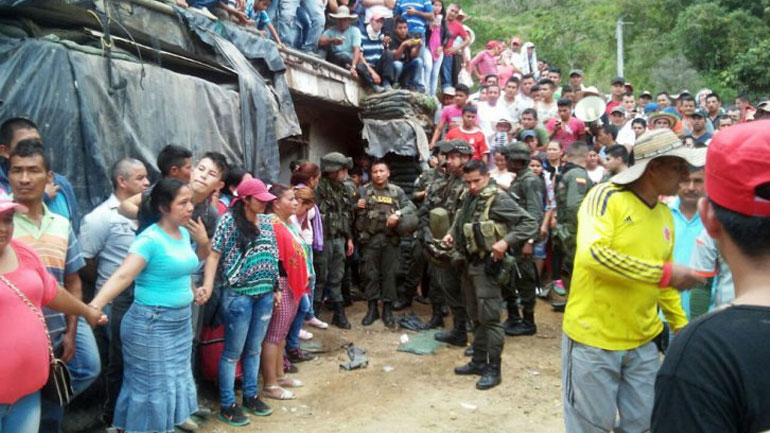 Amid fears of a pending FARC attack, inhabitants of a village in the southwest of Colombia on Tuesday removed all policemen from their village after which the local police station was destroyed.

The incident took place in El Mango, a township in the southwestern Cauca, the same province where locals on Monday temporarily detained 32 military officials they accused of murdering a local.

The village spokesman told Blu Radio that the townspeople removed the police because “we live in fear that the guerrillas attack us and again destroy the town.”

One of the policemen who was removed from the village told Blu Radio that the FARC had given the people a three-day ultimatum to remove the police, “and if they didn’t get rid of us, they [the guerrillas] wouldn’t respond for what would happen.”

The policeman fiercely criticized national authorities, claiming that the officers had long been left abandoned in what is widely considered FARC territory.

The officer bashed National Police director Rodolfo Palomino who allegedly had called the sergeant in charge of the police station and had accused him of being a “coward.”

“Had these people not expelled us, we would have ended up getting killed today,” said the policeman.

Once the villagers had removed the police, the police station was destroyed.

While Palomino accused the townspeople of burning the station, the locals said that the policemen themselves set fire to the station on their way out.

After the fire, the police station was torn down with a bulldozer, allegedly with the help of the FARC guerrillas.

Police and soldiers across Colombia are on high alert after the FARC last month suspended a unilateral ceasefire they had imposed to support ongoing peace talks with the government and began an offensive unseen since 2011.

Since then, more than 150 attacks were carried out by guerrilla units in some casing exposing the weakness of the security forces who have been trying to defeat the guerrillas since 1964.

Almost 30 policemen stationed in a village in the northwest of the country recently went public, asking to be removed from the village, claiming a FARC attack had destroyed their post and left them as sitting ducks for the guerrillas to shoot at.

Despite the recent uptick in violence, negotiations still continue in Havana, Cuba between the Colombian government and the FARC.