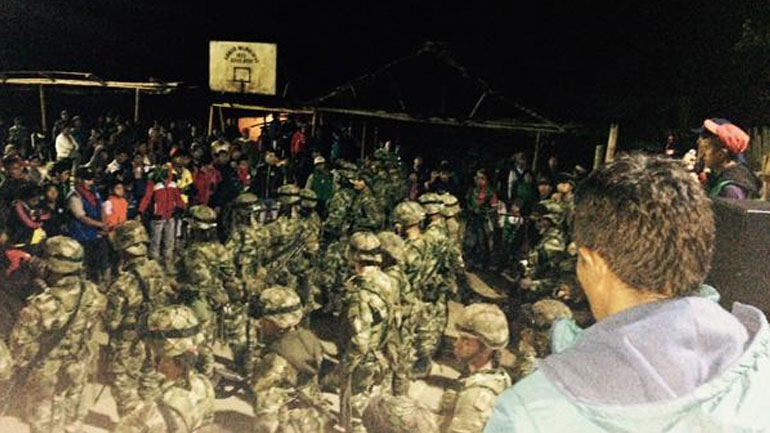 Indigenous guards from a reserve in southwest Colombia temporarily detained 32 members of the army after accusations the military unit murdered a local.

The indigenous community decided to detain the 27 soldiers and five commanders early Monday after locals had accused the unit of murdering one of the members of the community.

The community’s indigenous guard, authorized by law to maintain order in indigenous territory, then proceeded to detain the military members “with the objective to advance the investigations leading to the corresponding sanction,” according to local indigenous rights organization CRIC.

Following the unit’s retention, National Army commander General Jaime Asprilla asked the Ombudsman’s Office to mediate between the army and the community and seek the release of the troops.

Asprilla confirmed the death of the local, but claimed this happened during combat.

General Wilson Cabra, commander of the Apolo Task Force also confirmed the death, implying the civilian had died in cross fire between the army unit and the and members of the FARC’s 6th Front, an elite fighters unit of the guerrilla organization.

However, the Colombian army is under major legal pressure after killing more than 4,000 civilians, falsely reporting these homicides as combat kills.

This “false positives” scandal as it has become known recently led to the arrest of the entire command of one army unit active in the north of the country and the investigation of 22 generals allegedly implicated in the systematic killing of civilians.

Following the intervention of Ombudsman delegates, the indigenous agreed to release the members of the military after they were promised the investigation would be in hands of “the Prosecutor General’s Office to carry out the necessary forensic investigations and techniques to define individual responsibility and clarify the death.”

Indigenous groups in Cauca have long resisted Colombia’s 51-year-long war and have in the past detained both members of the National Army and alleged members of guerrilla group FARC.