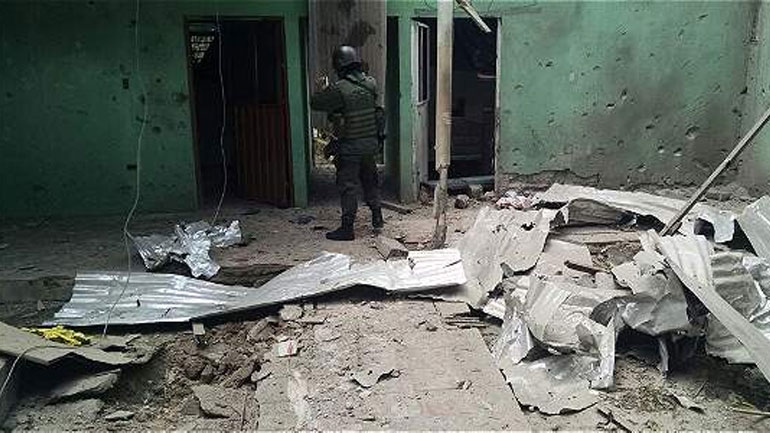 A group of 28 policemen asked their commanders for permission to retreat from a small town in northeast Colombia after the FARC destroyed the police station there, leaving the officials as sitting ducks, newspaper El Tiempo reported Thursday.

The FARC destroyed the police station in of the village of Las Mercedes in Norte de Santander on Monday, killing one official and leaving the remaining officers without roof.

Following the attack, police had also received warning that further attacks against them were pending.

“There is information that people should vacate the village because of their [the FARC] plans are to finish us (…) to kill us,” said one policeman at the scene, who asked not to be named, and was quoted by El Tiempo.

The policeman also called for a withdrawal, suggesting that there were inadequate defenses available to justify sending in more men.  “We are human beings.  It’s not fair to send more police to lose their lives,” he said.

Relatives of some of the men approached police command facilities in the nearby city of Cucuta yesterday morning, to demand the withdrawal of the policemen.

The commander of the Police Region No 5, General Jaime Vega, responded that he would not call back the troops from the settlement until the committed time of six moths had elapsed.  The men have been in the area 15 days so far.

“I tell the community that the National Police throughout the country is supposed to protect their lives, their honor and their property, and we will not withdraw from anywhere,” General Vega was quoted.

He added that the men who are assigned to las Mercedes have been trained to deal with such circumstances.  New construction of a more solid installation for defense would begin as soon as resources were made available.  Coordinated actions to repair the current building, damaged during the attack, were underway.

Authorities have also reported that new units were sent to the area to coordinate with army troops and reinforce security.

The town of Las Mercedes and its police station have been frequent victims of alleged FARC bombings and attacks for several years of the conflict. The attacks have endangered both police and civilian lives.

Intense violence began in 1998, when the FARC’s national offensive against public forces came to Sardinata, leading to the kidnapping of 20 police officers and several deaths in one incident alone.

Skirmishes were on and off from that point, until a new wave of terrorist-like attacks in 2011 brought a series of bombings to the town center, causing several deaths, and widespread destruction of property.

In response to the FARC’s long-standing attempts to harass and overtake the police station, the town’s residents mounted a campaign to have the military target moved away from the general populous, to protect innocent bystanders, particularly children, from an armed conflict they themselves have never engaged in.

Early in the summer of 2013, the Supreme Court ruled in favor of the townspeople, ordering the police station be relocated away from civilian areas. Thus far, the Court’s ruling has gone unheeded.

A warning, issued to the Ministry of the Interior, called on the national government to follow through on the Supreme Court order to relocate the police station, and, in the meantime, “to act in a preventative manner to avoid the massive displacement of  […] and provide humanitarian attention to the population of Las Mercedes.”

In reference to the court order requiring a relocation of the police station, the governor of Norte de Santander where Las Mercedes is located, told NoticiasRCN in November 2014, that the search for resources for a new police station in Las Mercedes was still in progress. The authorities estimated that new construction would begin in 2015.