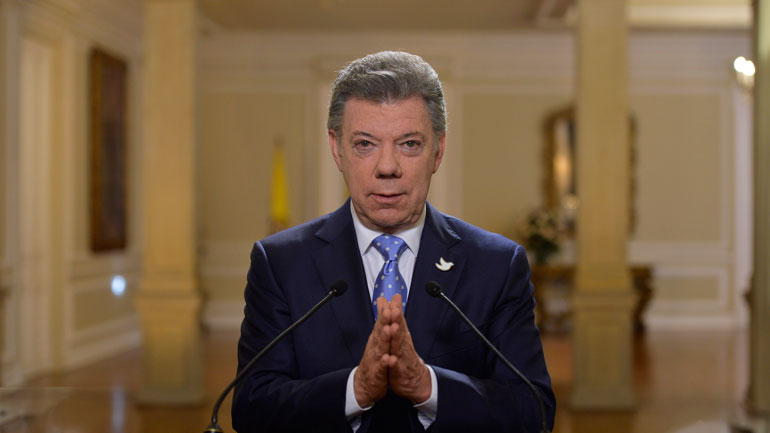 Santos calls on Colombia to ‘give peace a chance’

Following a key agreement on victims with FARC rebels, Colombia president Juan Manuel Santos took to national TV to call on his compatriots to “give peace a chance.”

The president has been promoting peace talks with the country’s longest-living rebel group since their official announcement in August 2012, but has been met with great skepticism and pessimism about the virtues of a political solution to the 51-year-long armed conflict.

But now, said Santos, “the time for peace has come for Colombia.”

According to the president, the victims deal that was presented by negotiators on Tuesday was “the most complex point on the agenda” of the talks that kicked off in Havana, Cuba in November 2012.

In the more than three years that the talks have lasted, the administration and guerrillas have found consensus on a rural reform, political participation, drug trafficking and victims.

Most importantly, the warring parties are now in agreement on how to punish war crimes committed during the conflict that has left at least 260,000 dead and more than 6.5 million displaced.

In the most recent deal “we defined the commitments and mechanisms to satisfy the rights of victims to truth, justice, reparation and non-repetition in the best way possible,” Santos claimed.

The one point left on the agenda is “End of Conflict,” which includes a bilateral truce, and the disarmament, demobilization and reintegration of the FARC’s approximately 8,000 armed members and an additional 12,000 unarmed members.

“We are working on reaching a bilateral and definitive ceasefire as soon as possible as the conditions are there to cease [military] confrontation and dedicate ourselves to the culmination of the agreements,” said Santos.

“The sooner we do this, the more lives we save,” the president stressed.

Earlier, Santos and FARC negotiators challenged each other to agree to a bilateral ceasefire on Wednesday, but this challenge was not met as the negotiators still need to “set the necessary conditions for the due verification of the truce.”

In spite of having reached agreements on all points but one, the peace talks continue to divide Colombia.

The conservative opposition in Congress, under the leadership of former President Alvaro Uribe whose father was killed by the guerrillas, continues to oppose the talks with a minority, but significant popular support.

Santos called on “all Colombians, to the friends of peace and its detractors,.. to give peace a chance.”

“Never have we been this close to peace,” the president said, promising that “the year 2016 will be the year in which Colombia sees a new dawn: the dawn of a country without war, without conflict, in which Colombia hopefully unites and moves towards its maximum potential.”