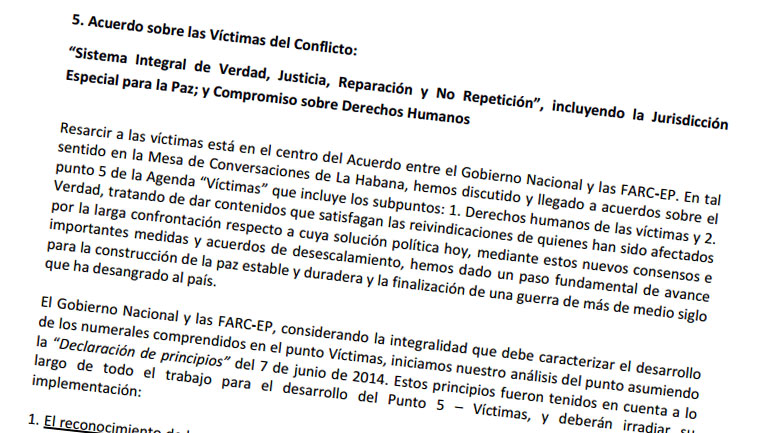 One of the most exceptional agreements made during peace talks between the Colombian government is the deal on victims, thousands of whom were involved in the formulation of the deal.

Apart from the 60 victim representatives who visited the negotiation teams in Havana, Cuba, thousands took part in forums organized by the United Nations and the National University in some of Colombia’s most war-torn regions.

The result of the negotiations is a 63-page agreement that, rather than focusing on punitive action, focuses on re-establishing the rights of the victims and the assurance that the violence they’ve gone through will never happen again.

In order to do this, the negotiators agreed on 10 principles that would become the negotiations’ framework:

One of the most important elements is the deal on justice, which has prioritized the clarification of events, important mainly for the tens of thousands of families whose loved ones were kidnapped or disappeared, over harsh punishments.

It is important to note that victims’ rights or interests go directly against the interest of the victimizers, i.e. the state and the FARC, both accused of thousands of if not tens of thousands of human rights violations. While harsh punishments for the gruesome crimes that have been committed would satisfy part of the needs of some victims, it would also make an agreement almost impossible because it could undermine the military and guerrillas’ compliance to transitional justice and thus perpetuate violence.

In order to obtain the highest levels of truth and justice, the administration of President Juan Manuel Santos and the FARC agreed to set up a number of bodies that will be in charge of the clarification of truth, punishment for victimizers, and justice and reparation for the victims.

In an attempt to comprehensively tackle victims, the warring parties agreed to a Comprehensive System of Truth, Reparation and No-Repetition.

Part of this system are a truth commission, a Special Peace Jurisdiction and extensive measures that seek the re-establishments of victims’ rights and their effective reparation, both materially as symbolically.

This Special Peace Jurisdiction will consist of five bodies.

A Truth Commission will try to clarify who is responsible for what, why the conflict took more than 50 years and what elements have aggravated the violence that left more than 7 million victims, particularly in the last 20 years of the war.

The truth commission should also help Colombians understand what has happened to their country and undo decades of bilateral war propaganda.

This commission will not have the authority to impose sanctions, increasing its chances to clarify truth, and the exact implication of guerrillas, soldiers and private organizations in the victimization of Colombian during the armed conflict.

In order to prosecute and punish war criminals, a Peace Tribunal will be put in place that independently from the truth commission will investigate war crimes committed during the conflict.

This peace tribunal will have several chambers, one focused on the individual investigation of demobilized rank and file FARC guerrillas, one to rule on whether guerrillas can be pardoned or must be prosecuted of war crimes, one investigative unit and one chamber that will sentence those found guilty of war crimes. The court will also investigate members of the military and civilians who collaborated in war crimes, for example by financing paramilitary groups.

The punishment of those guilty of war crimes depends on the war criminals’ collaboration with justice.

Those who take responsibility for crimes that they committed will face a “restriction of liberties” and rights by having to help with public works and activities, and satisfying the rights of the victims.

Those who admit to serious crimes including genocide, war crimes, crimes against humanity, torture, forced displacement and sexual violence, will face between five and eight years of “restricted liberty.” The court will decide what type of restriction of liberty will be imposed, but is not allowed to send people to prison. However, it can order war criminals to carry out forced labor or confine them.

Anyone one who refuses to cooperate and is found guilty will be sentenced with 20 years in a normal prison.

None of the implicated actors in the conflict can be extradited and convicted war criminals will have their right to take part in politics returned after having finished their sentence.

The deal on victim reparation seeks to contribute to already existing legislation like the current Law for Victims and Land Restitution. In all cases of reparation, victims will actively participate to secure their rights are served and their victimization is compensated by their victimizer.

The purpose of this is to promote the re-establishment of the dignity of the victims, reconciliation and the peaceful co-existence of civilians and former guerrillas.

In order to achieve this, the FARC, the government and private entities that have promoted victimization will have to take part in public acts in which they assume responsibility for suffering caused and ask their victims for forgiveness.

The FARC also agreed that their demobilizing fighters will provide free labor and reconstruct destroyed infrastructure, prioritizing areas most affected by the 51 years of warfare. Additionally, the guerrillas agreed to help in the clearance of landmines, help coca farmers in crop restitution programs and participate in, for example reforestation programs, where FARC attacks left environmental damage.

The government has promised to promote the participation in reparation efforts by state agents or state-aligned private actors like ranchers who financed the formation of paramilitary groups.

Additionally, the rural reform agreed on by the warring parties will prioritize the return of lost property to displaced people, who make up the vast majority of victims.

Colombians who have fled the country will receive government support in case they want to return.

The government will spearhead projects that seek the psycho-social rehabilitation of victims. Part of this is the government’s assumption of responsibility in areas long abandoned by the state. This increased state presence should also prevent illegal armed groups from emerging in areas where state abandonment has left a power vacuum long filled by the FARC.

Any Colombian who considers himself a victim of the conflict will be able to request to be repaired.

Some of the guarantees of non-repetition, including the crucial disarmament of the FARC, will be defined in the last point on the peace talks agenda, End of Conflict.

Others have already agreed before in deals on rural reform, political participation and drug trafficking.

Rural inequality and political exclusion are widely seen as some of the main causes of the conflict, while drug trafficking has been one of the main aggravators of victimization because its revenue fueled the buying of arms by illegal armed groups.

As part of the victims deal, the Colombian government has promised and begun campaigns that seek to protect human rights defenders and undo decades of stigmatization as part of war propaganda.

The public will increasingly be informed on what human rights are, what they are for and how to appeal to justice in cases of violations.

The state, long accused of disregarding its citizens’ human rights will also formulate a National Human Rights Plan and guarantee the safety of those who want to organize protests.

The Ombudsman’s Office will be strengthened and be responsible for helping other state entities in securing Colomban citizens’ basic rights.