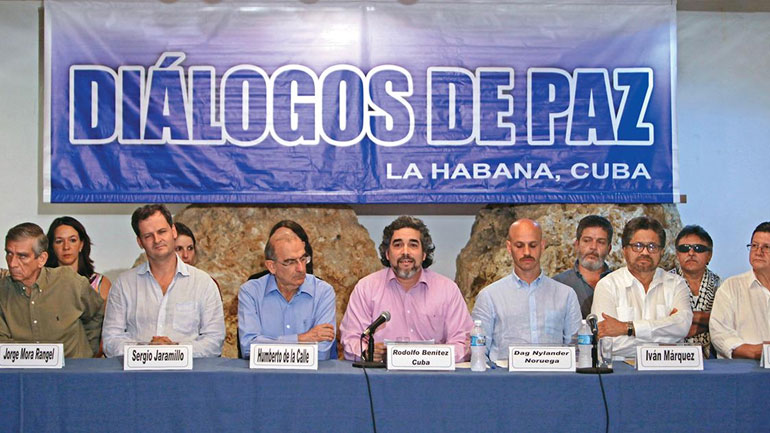 The Colombian government, FARC rebels and victims on Tuesday presented what all parties called a historic deal on victims, which includes previously announced deals on a truth commission, victim reparation measures and punishment for war criminals.

The ceremony was not just attended by delegates of the government, the FARC and the host countries, but also by ten victims of the conflict that began in 1964 and has left more than 7 million victims.

The 63-page deal on Victims includes measures that seek the clarification of truth, punishment for war crimes in compliance with International Humanitarian Law, material and symbolic victim reparation and measures that guarantee the no repetition of the violence that has haunted Colombia for decades as earlier announced.

Additionally, a special unit will be created that will focus on clarifying the disappearance of tens of thousands of Colombians, some of whom were kidnapped by guerrillas and never returned, and others who were disappeared and presumably killed by either soldiers, guerrillas or state-aligned paramilitary groups.

One of the most highly anticipated parts of the deal was a specification of how war criminals would be punished. The transitional justice deal included “restrictions of liberty,” ruling out prison sentences for guerrillas, members of the military and civilians.

The final victims deal said that the war tribunal put in place in the event a peace deal is signed will determine how convicted war criminals will effectively be restricted of their liberty.

According to the agreement, “the effective restriction means that there will be the appropriate mechanisms for monitoring and supervision to ensure compliance in good faith with the restrictions ordered by the court.”

This court, which will consist of both Colombian and foreign judges, “will determine the conditions of the effective restriction of freedom necessary to ensure the compliance with the sanction, conditions that in no event can be understood as jail or prison or similar incarceration methods.”

Rather than seeking harsh punishments for the gruesome war crimes committed during the 51-year-long conflict, the transitional justice system’s priority is to ensure the rights of victims in terms of truth, reparation and no repetition.

Victims themselves will be allowed to call for investigations for crimes allegedly committed against them, while both the FARC, the government and civilians will have the obligation to repair their victims both materially as symbolically.

While the state will determine for itself how to compensate for crimes committed by state agents, the FARC will repair their victims by carrying out infrastructure works in the areas where they have generated most victims. Additionally, the guerrillas will help in the clearance of landmines and will actively help in programs that seek to replace illicit crops like coca and marijuana.

Having agreed on Victims, the government and FARC now have only one point left on the agenda, End of Conflict.

This final point includes a definite end of hostilities, and the FARC’s demobilization and disarmament.

Special government and rebel sub-commissions have been negotiating on this since December last year already.