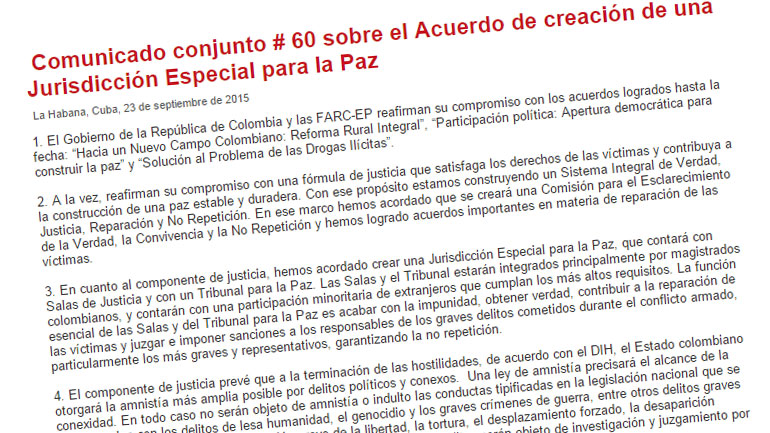 Guerrillas, soldiers and politicians who refuse to cooperate with Colombia’s transitional justice risk prison sentences of up to 20 years if found guilty of war crimes in the event of peace. This is one of the legal consequences that the FARC and the government agreed on as part of the ongoing peace talks.

The deal was announced on Wednesday, almost four years after peace talks that seek to end the hemisphere’s longest-lasting armed conflict.

While opponents of the talks feared an “exchange of impunity” of FARC crimes, the transitional justice deal presented in Cuba in the presence of President Juan Manuel Santos and FARC commander-in-chief “Timochenko” left plenty to worry for guerrillas, military commanders and politicians suspected of war crimes alike.

The process of transitional justice will seek to punish every actor that was directly or indirectly involved in the conflict that contributed to the victimization of over 7 million Colombians, with the aim of “satisfying the rights of the victims and contributing to the construction of stable and strong peace.”

The form of punishment imposed on the different cases will aim to consolidate peace, and restore and repair the damage caused. Those who take responsibility for crimes that they committed will face a “restriction of liberties” and rights by having to help with public works and activities, and satisfying the rights of the victims.

Those who admit to serious crimes including genocide, war crimes, crimes against humanity, torture, forced displacement and sexual violence, will face between five and eight years of “restricted liberty” in certain conditions.

Anyone one who refuses to cooperate and is found guilty will be sentenced with 20 years in a normal prison.

The Colombian state will grant amnesty as generously as possible for political crimes and crimes related to the conflict. An Amnesty Law that is still in the making will determine which crimes fall under this law. Any serious crimes including genocide, sexual violence, forced displacement, torture, war crimes and crimes against humanity will be prohibited from impunity.

In order to implement the process of transitional justice both sides have agreed on the creation of the “Special Jurisdiction for Peace”, whereby a special court that operates under the Integral System of True Justice, Reparation and No Repetition will deal specifically with all cases related to the armed conflict.

This tribunal will be made up of Colombian judges and “a minority of foreigners who meet the highest requirements.”

There will be two proceedings in the process, one for those who admit to the crimes, and one for those who do not. The tribunal will be formed of two courtrooms; one for sentencing and one for trial. The first proceeding will take place in the sentencing courtroom, where the accused can accept responsibility for victimization and the second will deal with cases in which the accused does not accept charges, but is found guilty.

The first trial which could face charges is based on crimes recognized by the Prosecutor General, the State, existing judicial rulings as well as information provided by human rights and victims’ organizations. The second proceeding will take place before a Court.

Impunity for any party was previously virtually impossible and is now completely impossible because of Colombia’s FARC and government’s commitments to the International Criminal Court, which has the authority to prosecute alleged war criminals if a member state is not able or willing to do so.

The ICC has explicitly warned that those “ultimately responsible” for war crimes must be adequately punished or the international court will intervene and prosecute suspected war criminals.

According to a 2012 ICC report on Colombia “there exist reasonable grounds to consider that the FARC, the ELN, the National Army and the paramilitaries have committed war crimes and crimes against humanity in Colombia after the beginning the court’s temporary competence” on November 1, 2002.

While a large number of alleged FARC crimes would precede 2002, those of the state occurred mainly after that, which will now be punishable by the new agreement, which will in turn provide judicial benefits to those being charged.

This is the first agreement between the FARC and the government that includes a model of transitional justice that also affects state actors and even civilians.

If any war criminal wishes to access the judicial benefits that come along with the new judicial system allocated for the transition to justice, they must provide the complete truth, seek to fulfill the reparation of the victims, and ensure that there is no re-victimization or repetition of what has happened over the course of the more than 50-year-long conflict.