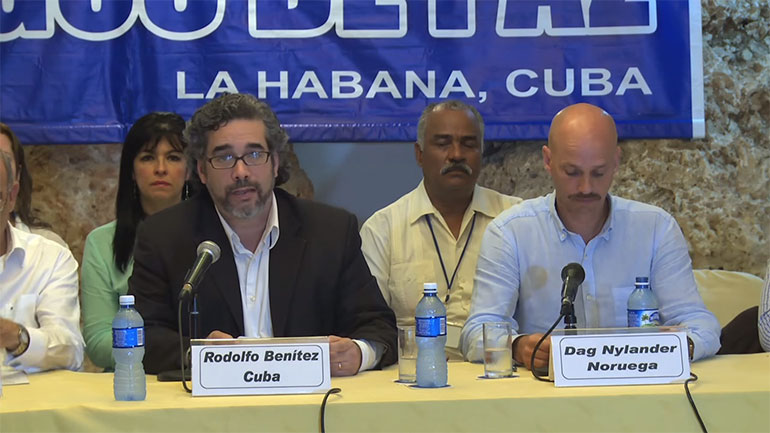 Colombia’s government and FARC rebels have agreed to begin locating, exhuming and returning Colombians who have gone missing during the country’s 51-year-long armed conflict.

This was announced late Saturday by the representatives of Norway and Cuba, the two guarantor countries of ongoing peace talks between the warring parties.

According to the agreement, both the government and rebels promised to help locate unmarked graves where the war dead may be buried, creating a “specialized unit to search for people who are considered disappeared,” according to a joint statement read by the Norwegian and Cuban representative.

The Red Cross will initially be involved to gather information from both the government and the FARC of the location of victims of forced disappearance, thousands of whom found their final resting place in unmarked graves across the country.

According to the country’s Medical Examiner’s Office, more than 77,000 Colombians are currently registered as missing.

More than 45,000 of these missing persons are believed to be forcibly disappeared and feared to either have been buried in unmarked graves or thrown into rivers, according to statistics by the National Victims Unit.

According to the Red Cross, the number of disappeared exceeds 107,000. How many of these missing persons would be dead is unclear.

The negotiators agreed that this massive search for missing Colombians will before the eventual signing of a final peace deal that both the FARC and the administration of Juan Manuel Santos will be reached before March 23 next year.

The government, accused of killing thousand of civilians, vowed to surrender information to the Red Cross about Colombians who were killed in military operations and buried without identification.

The FARC, also accused of killing thousands, “will surrender information for the localization of victims’ remains they know of, and will contribute to their dignified surrender” to the loved ones, some of whom have been waiting for their disappeared family members for decades.

In the event of a peace deal, the state will create a “Special Unit for the Search of People” that will continue efforts to locate, exhume and return the remains.

This unit will be operating autonomously to prevent undue intervention by authorities.

The government and the FARC, by far Colombia’s largest rebel group, have been engaged in talks since November 2012 to end a war that began in 1964, cost the lives of more than 265,000 Colombians and forced the displacement of more than 6 million.