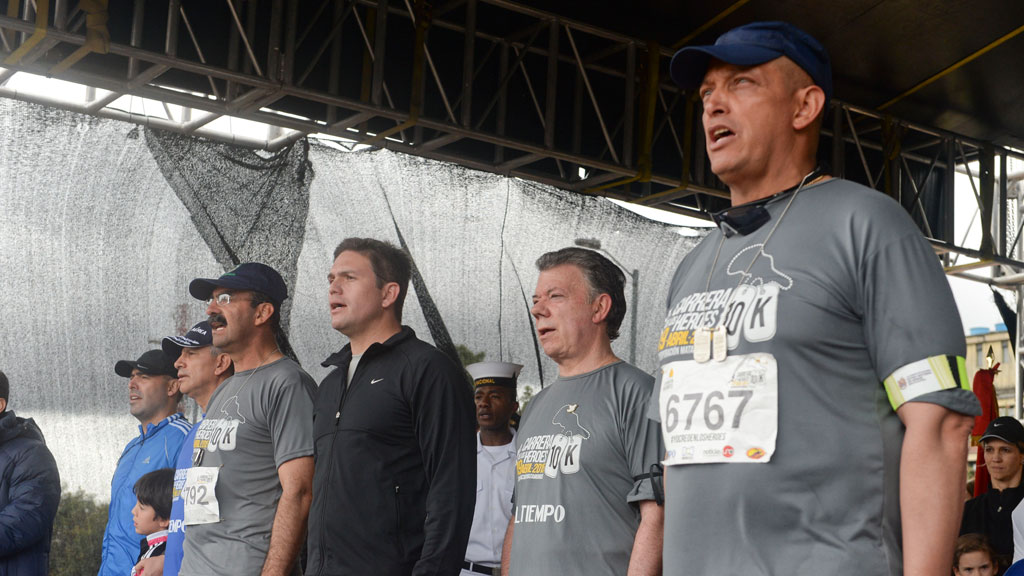 Santos booed at event in support of military

Colombian President Juan Manuel Santos was booed on Sunday when attending a run in support of injured or killed members of the military.

The president — as he does every year — took part in the six-mile run, but was painfully faced with his skyrocketing disapproval ratings when taking to the speech to address the crowd of policemen, soldiers and sympathizers of the security forces.

Less than a week after 11 soldiers were killed and 20 were injured in a FARC attack, attendants to the march turned their rage against the head of state and booed him while Santos called for unity.

“This is not the time to be divided, it’s the time to all unite and reach the victory of peace in this country,” the president told the partially hostile crowd.

Defense Minister Juan Carlos Pinzon unsuccessfully tried to calm the crowd, which insisted on vocalizing their frustration with the president who for two and a half years has been negotiating peace with the rebel group responsible for the attack.

The FARC apparently broke its unilateral ceasefire when it attacked an army unit that had set up camp on the border of a local village.

In response, Santos resumed air strikes against the guerrillas he had suspended less than six weeks earlier.

The military began a counteroffensive in the southwestern Cauca state. At least five civilians were killed after violence resumed, while local and international organizations warned for imminent mass displacement if the fighting continued.

The government has been negotiating peace with the FARC, Colombia’s oldest and largest rebel group, since November 2012.

The negotiations have divided the country and, according to pollsters, can count on considerable pessimism regarding a possibly positive outcome.

The president himself has suffered abysmal approval ratings since shortly after he first came into office in 2010.