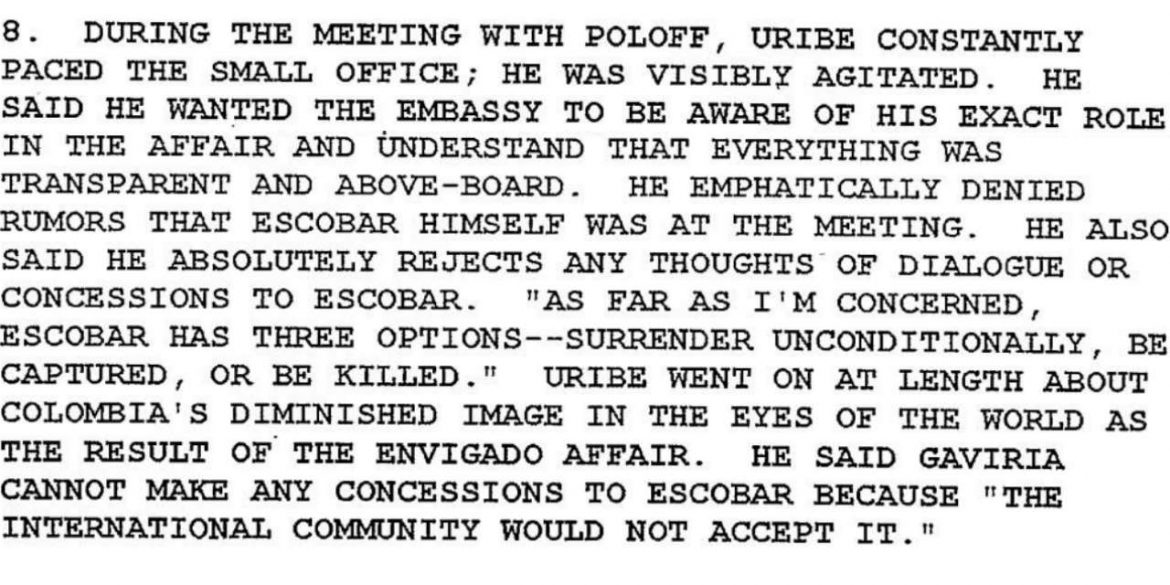 Declassified US cables that were released Friday amplify claims that Colombia’s former President Alvaro Uribe was an associate of the now-defunct Medellin Cartel.

In one cable, the US embassy informs the Department of State in Washington DC over multiple senators claiming that Uribe’s political campaign in the 1990s were financed by the cartel.

Other cables show that the US embassy was suspicious of Uribe’s alleged ties to drug traffickers for years.

This was confirmed by Antioquia politician Alejandro Gonzalez, who was assassinated in 1994.

Medellin Cartel chief Pablo Escobar, who was in hiding at the time, was allegedly pressuring Uribe to open communication channels with then-President Cesar Gaviria.

Escobar, through the Ochoas, is now demanding Uribe return the favors.

Former Antioquia Senator Alejandro Gonzalez reiterated Velez’s charge that Uribe fears for his life because he was unable to deliver for his Medellin Cartel mentors.

The former president has always insisted that his family’s ties to the Ochoa family were unrelated to drug trafficking.

Claims of Uribe’s alleged ties to the Medellin Cartel have been supported by investigative journalists and the US’ Defense Intelligence Agency.

According to the embassy, receiving money from drug cartels was “a near universal practice in Colombian politics” at the time.

The cable followed a meeting between an embassy official and the then-senator in January 1993.

Uribe “was visibly agitated” and “constantly pacing the small office” in the US embassy as he explained a meeting between himself, Escobar’s wife, Antioquia’s then-Inspector General Ivan Velasquez and Alvaro Villegas, a powerful politician from Antioquia who reportedly was Uribe’s political patron.

The meeting was initially secret, but had been made public by Escobar.

Uribe “said he wanted the Embassy to be aware of his exact role in the affair and understand that everything was transparent and above-board,” according to the cable.

‘Substance’ to rumors over drug ties.

In an unrelated 1993 cable, ambassador Morris Busby told the Department of State that he believed there was “substance to the rumors”of ties between drug traffickers, Uribe, businessman Cesar Villegas and Ernesto Samper, who would become president a year later.

Rumors of the involvement of these three with narcotics traffickers abound, and although hard evidence is lacking in all cases, we believe there is substance to the rumors. It is not clear how close the direct link between Samper and the traffickers is (or was), but we have serious doubts that, if elected, he would pursue counternarcotics with the same energy and vigor that [President] Gaviria has.

Uribe is currently investigated by the Supreme Court over his family’s alleged involvement in death squads that were formed before and after the death of Escobar in December 1993.

These investigations, however, have been complicated. Multiple witnesses have been assassinated and, according to the court, there are indications Uribe is trying to intimidate witnesses.