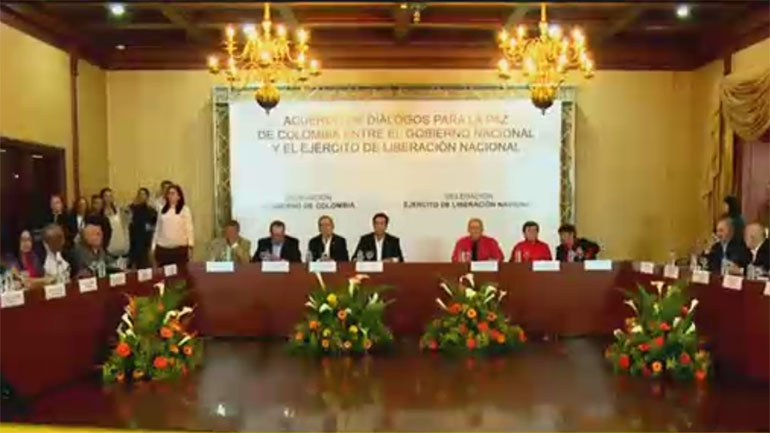 Parallel to ongoing peace talks with Colombia’s largest rebel group FARC, ELN rebels also agreed to formalize peace talks that seek to end more than half a century of violence, the government and rebels announced Wednesday.

The announcement was made in the Venezuelan capital of Caracas by representatives of the administration of President Juan Manuel Santos and the ELN leadership.

Brazil, Ecuador, Chile, Cuba, Venezuela will be host nations of the talks that will be monitored by the Catholic Church, to which the rebels were ideologically tied when they first emerged in the 1960s.

Norway will also have a role as guarantor nation. Ecuador will be the main location of the talks.

The formalization of the talks follow more than a year and a half of secret negotiations and a recent spike in ELN attacks targeting mainly the security forces and the oil industry.

Exploratory talks were already announced in June 2014, five days before the successful reelection bid of Santos, but proved more difficult than anticipated by both the ELN and the government.

The announcement of the talks also provides a major tailwind for ongoing peace talks with the FARC, talks that are widely considered to be in their final stretch.

Failed or no peace talks with the ELN could potentially undermine the success a peace process with the FARC, which has worked closely with the ELN for years.

In the weeks leading up to the announcement, the ELN increased its military offensive, carrying out an average of three attacks a day, according to conflict observers.

Some of these attacks took place in what originally was FARC-controlled territory, which spurred fears dissident FARC guerrillas were switching sides to avoid demobilization.

But with the ELN on board, FARC guerrillas seeking to evade their demobilization and disarmament will have more difficulty finding an existing group to join.

Moreover, with both the ELN and the FARC engaged in talks, the government will have more resources to fight paramilitary successor groups that formed from the AUC during and after the paramilitary umbrella organization’s partial demobilization between 2003 and 2006.

Both guerrilla groups have been at war with the state since 1964 in response to the violent repression of rural groups opposing a pseudo-democratic government that had been put in place to end a decade of bloodshed between Liberal Party and Conservative Party supporters.

The conflict escalated in the 1980s as drug trafficking provided the rebels with major financial resources and government aligned paramilitary groups entered the war.

Following the United States’ involvement in the armed conflict as part of the 1999 Plan Colombia, both the ELN and FARC were decimated, but were able to force a stalemate after switching from territorial to guerrilla warfare around 2008.

If the talks with the ELN are successful, they will be allowed entry to Colombia’s political system, a minor political victory for the group who once hoped to overthrow the government, but ended up being partly responsible for the more than 260,000 innocent civilians who died in the conflict.