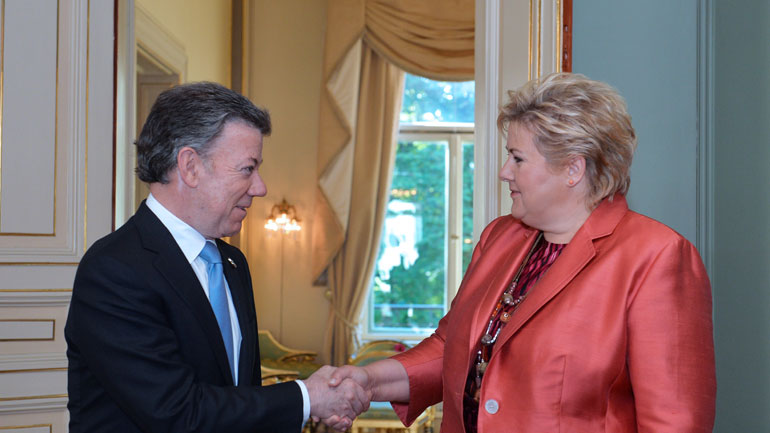 Solberg and Santos met up in Oslo to discuss a number of bilateral issues, most importantly the ongoing peace talks that have been taking place in Havana, Cuba since November 2012.

According to the Norwegian PM, “we believe it’s important to step up the negotiations. However, the two parties [engaged in the war] must seek the solutions. Norway’s role is to facilitate.”

Solberg’s urging to speed up the talks followed a previous statement by her government’s delegate at the peace talks, Dag Nylander who urged the government and the rebels in late May to urgently seek a bilateral ceasefire.

“We call on the parties to continue their efforts on finding a negotiated solution to the remaining issues, including reaching an agreement on a definitive bilateral ceasefire and cessation of hostilities,” Nylander said on behalf of his government and that of Cuba, the host of the talks.

The warring parties had agreed to try to deescalate the armed conflict for the duration of the peace talks in December. However, mutual attempts to achieve this were revoked after a FARC unit killed 11 soldiers in a surprise attack in the southwest of Colombia in mid April.

An increase in FARC attacks and military offensives has left at least a million affected in the past three weeks, while another 1,000 were displaced in that period due to ongoing combat, particularly in the west and southwest of Colombia

According to the United Nations, the ongoing violence is putting the peace talks “at risk.”

Colombia peace talks ‘at risk’ amid wave of FARC and military strikes: UN

The rebels and the government have been negotiating peace have since the beginning of the talks signed partial agreements on political participation, rural reform and the FARC’s abandoning of drug trafficking.