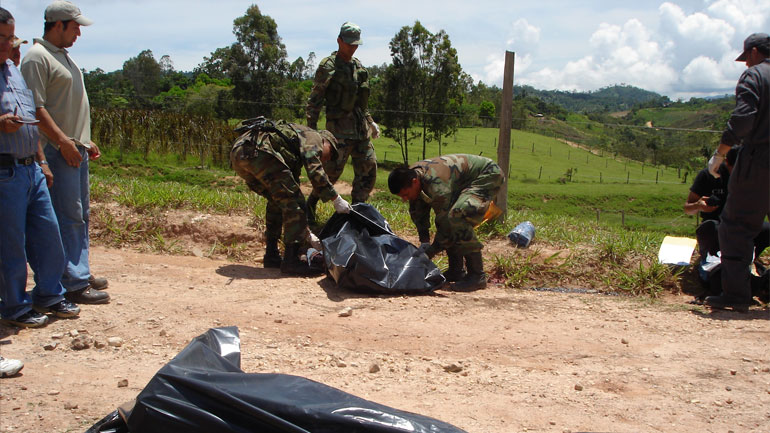 Colombia peace talks ‘at risk’ amid wave of FARC and military strikes: UN

The United Nations’ High Commissioner for Refugees said Thursday that ongoing peace talks between Colombia’s government and FARC rebels could “derail” over a recent increase in FARC attacks and military offensives.

The violence had cooled down significantly between December and May when the FARC leadership had ordered its units to uphold a unilateral ceasefire and President Juan Manuel Santos ordered a suspension of air strikes.

However, after a FARC unit in the southwestern Cauca province killed 11 soldiers in a surprise attack, air strikes were resumed.

When one of these air strikes killed at least 26 guerrillas in the west of the country two weeks ago, the FARC suspended their ceasefire.

Since then, guerrilla units have carried out 20 attacks against infrastructure and the security forces, affecting more than a million people mostly because attacks on energy towers left entire cities and provinces without power.

Clashes between the military and the FARC additionally caused mass displacements that have left almost 900 people displaced in Cauca in the last two weeks alone, according to Ombudsman figures sent to Colombia Reports.

This renewed violence is now threatening the peace talks that have been ongoing in Havana, Cuba since November 2012, said United Nations High Commissioner for Refugees, Antonio Guterres.

“After decades of unrest, Colombians, especially the millions displaced, have longed for peace, pinning hopes on a negotiated settlement. Any disruptions in the peace process could jeopardize its chances of arriving at a positive outcome,” Guterres said Thursday.

The UN official saw his claim confirmed in Colombia where former President Alvaro Uribe, a consistent critic of the talks, called for the negotiations to be suspended until new conditions are imposed on the guerrillas.

Following the killing of three policemen in Cauca, Congress President Jose David Name, a member of Santos’ congress coalition, said Thursday that the government should abandon the talks if the FARC carries out one more attack.

Meanwhile, Colombians seem to have lost faith in the talks after the resumption of violence.

A poll released on Friday revealed that 47.5% of Colombians are in favor of suspending the talks.

Less than 18% of Colombians said to be in favor of continuing the talks while the armed conflict in ongoing.

A bilateral ceasefire that has been suggested by the host countries of the peace talks, Norway and Cuba, the UN representative in Colombia, victim organizations and the FARC itself can count on the support of only 9.4% of the population, according to pollster Datexco.