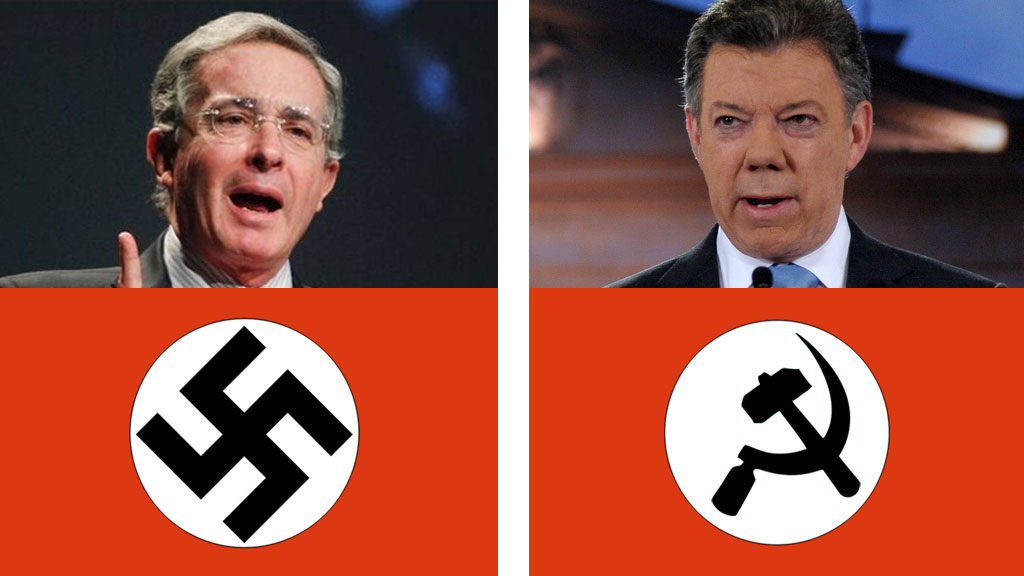 The political battle between Colombian President Juan Manuel Santos and his predecessor, Alvaro Uribe, has reached a record low after the head of state implied the “extreme right” opposition leader is “using fascist tactics.”

Santos, in a recent past Uribe’s defense minister, took an unprecedentedly fierce swing at his predecessor on Wednesday while attending the annual National Journalism Awards.

“The extreme right opposition has taken up a strategy to present itself as politically persecuted … and the country knows, knows very well, that this is another monumental lie,” Santos said in Bogota.

Santos responded to the announcement of several strategies of conservative opposition party Democratic Center to seek international protection from an ongoing “political persecution” by the Santos-loyal Prosecutor General, and seek support abroad for its opposition to ongoing peace talks with the FARC.

The party has regularly accused the government of “surrendering Colombia to ‘Castro-Chavism’,” and has fiercely opposed the possibility for amnesty for FARC leaders, a position supported by a majority of urban Colombians.

In order to do so, several of the party’s senators including Uribe had scheduled a visit to the United States and Germany, but were barred from leaving the country before Wednesday to be able to take part in an extraordinary session to debate the government’s four-year development plan.

According to the Democratic Center, the government was playing favorites, allowing leftist opposition lawmakers visit peace talks in Cuba while banning the conservative opposition from leaving the country.

However, the leftist opposition — in effect united with the centrist coalition against the former president — denied this.

“Nobody is barring @AlvaroUribeVel from traveling. The rule is that one can not miss these sessions. I will arrive today. They must stop manipulating,” tweeted Ivan Cepeda, one of the senators and members of the Broad Front for Peace coalition that had traveled to Cuba to meet with the FARC and attend the presentation of the report of the Historic Commission that sought to establish causes and responsibility of the conflict.

However, according to Democratic Center executive Carlos Holmes Trujillo, his party is victim of an “unacceptable discrimination.”

Uribe sent out a series of angry tweets, accusing the president and the Prosecutor General of all kinds of wrongdoings.

According to the former president, Santos has been buying support by granting government funds to family members in the media and independent politicians.

How the Colombian Government is (not really) buying the media

Additionally, Uribe dug up an old rumor that Santos had received drug money to fund his election treasury, and implied that the president is evading taxes through Swiss bank accounts.

“This government has never called media executives to scold them, and it certainly has not been spying on them or removing advertising from those who criticize,” said Santos, referring to Uribe’s alleged behavior while president between 2002 and 2010.

“Now they want to apply abroad the same fascist tactics they have applied here in Colombia: To lie and lie and lie,” the president said.

According to Santos, Uribe and his party “have gone to new heights in claiming is some sort of dictatorship, or a pro-Communist regime where the government persecutes its opponents. This crosses the line for a responsible opposition.”

Uribe’s argument that he’s the victim of a political persecution is due to a number of criminal investigations carried out against him and former members of his two administrations. Uribe’s former spy chief — presumed to have information that could directly link Uribe to a major wiretapping scandal — was arrested in Panama less than two weeks ago.

Only days later, a Medellin court ordered the investigation of the president over his alleged complicity in a paramilitary massacre in 1997.

Was Uribe complicit in a 1997 massacre?

Additionally, the Supreme Court — clearly bothered by the spying carried out by the presidential security agency — refused Uribe to propose a Prosecutor General who could have eased the judicial pressure on the former government.