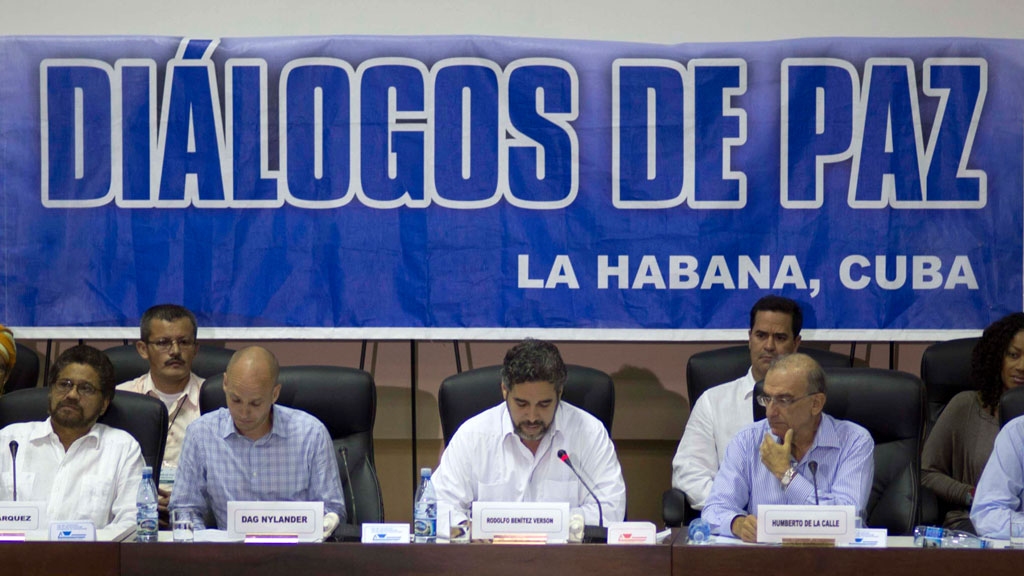 Forty-seven percent of urban Colombians are optimistic about the outcome of ongoing peace talks between the government and rebel group FARC. This was only 39% in December.

At the end of last year 57% of Colombians said to be pessimistic about the outcome. This group has now become the minority, consisting of only 47% of the interviewed.

The outcome is welcome news for President Juan Manuel Santos who has failed to drum up significant popular support for what internationally is seen as a historic peace process.

Support for the talks has traditionally been low in the cities as most of the violence affects the countryside of Colombia.

To demonstrate this, the polls showed that urban Colombians are far more concerned about violence generated by common criminals than by either left-wing rebels or right-wing paramilitaries.

Do you believe that the current peace process of the government and the FARC will end well?

The increase positivism is particularly significant taking into account that throughout 2014, 61% of Colombians were pessimistic about the income of the talks against 30% who had faith in the process last year.

Support for a military defeat as a solution to the conflict has lost popularity. No more than 28% of Colombians support this as a final solution to the 50-year-long war.

The increase of support for peace talks coincides with a drop in popularity of important opponents to the talks. Colombia’s most vocal opponent, former President Alvaro Uribe, has slowly but surely lost his one-almighty approval. According to the poll, the now-senator can only count on the support of 45% of Colombians, while 50% have a negative perception of their former leader.

Uribe’s presidential candidate in the 2014 elections, Oscar Ivan Zuluaga, has lost most popular support after his campaign to become president was charged with illegal spying on the talks for electoral purposes. Since then, Zuluaga’s popularity has plummeted to 29% while 56% of Colombians now perceive him negatively.

Santos, who won the elections with a pro-peace campaign and low approval ratings, continues to be fail to generate sympathy among Colombians. His popularity is two percentage points higher than that of Uribe, but still: 50% of Colombians do not like him.

While optimism over the successful end to negotiations has grown, Colombians are far less optimistic about the possible effects of peace on Colombia and appear hardly willing to make concessions possible necessary to convince the rebels to lay down arms.

While a vast majority of Colombians are in favor of a referendum to approve the talks, there appear little illusions about the positive effects of such a deal.

The majority of Colombians, 57%, said to believe a peace deal will result in increased recognition of rural problems.

However, no majority thinks the peace deal will result in a reduction of political stigmatization, and increase in confidence of the state, a decrease in corruption or less discrimination.

As urban Colombians fail to see the gains of a peace deal, there hardly seems to be a will for compromise.

Only 34% of the urban dwellers is in favor of FARC leaders taking part in politics, a staggering zero percent is in favor of allowing ex-guerrillas to join the security forces and 16% is in favor of reserving seats in Congress for demobilized guerrillas with congressional aspirations.

No popular support for amnesty

Another hard pill to swallow would be the possible amnesty of members of the group that is accused of thousands of human rights violations.

According to Cifras y Conceptos, not one of the proposed amnesty arrangements that include lowered prison sentences can count on the majority of the urban population’s support.

With which of the following applications of justice would you be in agreement in the signing of the peace deal depended on it?

As peace talks have progressed, a minority support for leniency for the FARC has slightly increased. For example, a prison sentence up to a maximum of eight years, which was granted to members of the paramilitary AUC who demobilized between 2003 and 2006, that in January could count on the support of 37%, was approved by 28% in October 2013.

The talks began in November 2012 and have since already agreed on the political participation of the FARC, a rural reform and drug trafficking. The warring parties are currently negotiating victim reparation and the final end to the conflict between guerrillas and state that has waged since 1964, killed 900,000 and displaced six million.