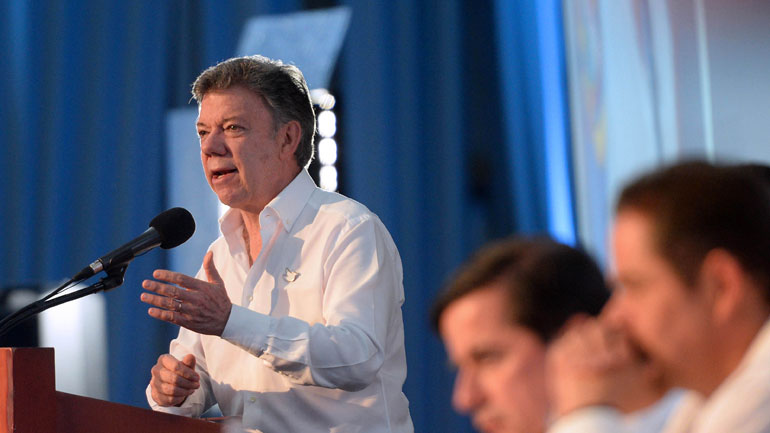 Ceasefire in Colombia possible after justice deal with FARC: Santos

Colombian President Juan Manuel Santos said Thursday that he would be willing to declare a bilateral ceasefire once FARC and government peace negotiators reach a compromise on transitional justice.

This bilateral ceasefire would mean the end of more than half a century of violence between the guerrillas and the state and could be agreed upon before finalizing peace talks.

However, the most thorny subject of the talks has been that of justice. The armed conflict in Colombia has left more than 260,000 people dead and a total number of victims that has exceeded 7 million, or 14% of the country’s entire population.

Both the FARC and the government have committed tens of thousands of war crimes that may not remain in impunity or the International Criminal Court steps in to impose justice.

“If we overcome this obstacle … we will have advanced enough to think of the possibility of a definitive and bilateral ceasefire,” Santos said.

“We are almost on the other side and nobody can justify continuing a war when peace is within hand’s reach,” the president explained.

The transitional justice chapter is currently being negotiated as part of one of the last points on the peace talks agenda, “Victims.”

A subcommission consisting of high-ranking military and FARC commanders are negotiating “End of Conflict,” which includes the bilateral ceasefire and the FARC’s final demobilization.

According to Santos, this subcommission will have to find consensus with international observers about the monitoring and verification of the truce, and the FARC will have to agree to concentrating its forces in one or more specific areas where rebel fighters can submit to the first steps in a DDR (Disarmament, Demobilization and Reintegration) process.

The FARC is currently upholding a unilateral ceasefire and, even though there is no agreement on a bilateral truce, also the military has ceased its attacks on the rebels in the second and third week after July 20 when the guerrilla ceasefire came into force.

Guerrilla leaders have long said that unilateral ceasefire are impossible to maintain and difficult to verify if combat persists due to army offensives.

According to “Pastor Alape,” one of the FARC’s most respected military commanders, a previous ceasefire that lasted from December 20 until May 22 caused major unrest among guerrillas in the field who felt they were left as sitting ducks.

The government and FARC rebels have been negotiating peace since November 2012 and have since reached agreement on rural reform, political participation and the problem of illicit drugs.

A peace deal with the FARC would not mean a final end to the armed conflict in Colombia.

The ELN, the country’s second largest rebel group, has not yet agreed on formal peace talks with the government and neo-paramilitary groups that formed during the controversial demobilization of paramilitary organization AUC have since become one of the biggest public security threats in the country.