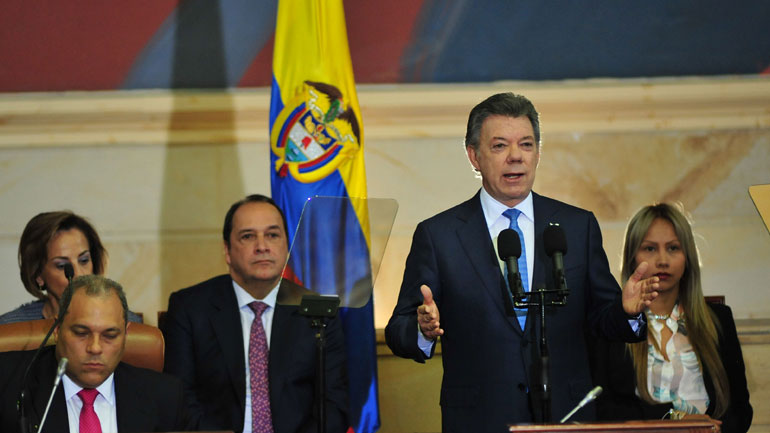 Colombian President Juan Manuel Santos inaugurated a new legislative year on Monday, calling for unity before a Congress that could arguably not be more divided over ongoing peace talks and upcoming elections.

Santos, whose centrist “coalition of national unity” has held a shrinking majority in congress since 2010, has faced strong opposition from the right since last year’s elections.

With peace talks approaching their fourth year and local elections set for October, major rifts between Santos’ coalition have also begun forming and are further weakening his government.

Amid this fracturing of parties and tough opposition, Santos called for unity, which he has done consistently since coming into office in 2010.

The president even urged not to repeat mistakes made during the “Foolish Fatherland,” a particularly politically divided period in the 19th century during which the former colony that is now Colombia descended into civil war over political disputes.

“Instead of working together to build a prosperous and autonomous nation, our leaders dedicated themselves to infighting, arguing about privileges and forms of power, organizing civil wars, and forgetting the real enemy,” Santos said.

“I invite you to respect our differences. Because this is not about us thinking the same … it is about us focusing our energy and our battles towards our real enemies, which are poverty, inequality, unemployment, corruption, insecurity and war,” the president added.

On the first legislative day of the year, Santos could not have found a more divided Congress.

Since 2010, the president has faced a leftist opposition. In 2014, the Democratic Center entered Congress, squeezing Santos in the center while fiercely opposing the president’s attempts to seek peace with the FARC and increasingly liberal policies.

The dragging peace talks and liberal policies forced the Conservative Party to abandon the coalition in March and join Uribe in the conservative opposition bench, leaving the president with little more than half of the senate.

But as local elections are set for October, what is left of Santos’ Coalition of National Unity — “the basis of governability” as Santos said in his speech — is also showing deep divisions.

Several political clans, both on the national and regional level, are trying to put political allies in positions of power, in some cases not afraid of endorsing dubious candidates.

The Liberal Party has seen a fraction between dynasties. Two senators resigned from the board of directors, claiming that senior Senator Horacio Serpa, a former minister with decades of corruption allegations, fails to promote a meritocracy within the parties.

Serpa’s political pickings also cost him dearly when prominent liberals from his home province Santander rejected Didier Tavera as candidate governor over allegation the candidate had ties to paramilitary groups accused of tens of thousands of human rights violations.

In Bogota, part of the party’s leadership supports leftist opposition candidate Clara Lopez of the Democratic Pole rather than the official party candidate, Rafael Pardo.

Attempts to bring forth one candidate have failed in big cities like Cali and Barranquilla while the coalition parties are still struggling what to do with Medellin mainly because of a conflict of interest between local party moguls and national players.

This type of division between powerhouses is not unique to the coalition. The Democratic Center has failed to present a candidate for the Antioquia province, its stronghold, also due to tensions between local party leaders and the party’s leadership in the capital.

The Conservative Party is possibly even more divided as its national leadership opted to endorse Liberal Party candidate Rafael Pardo.

The almost historic move is much to the disagreement of former presidential candidate Marta Lucia Ramirez who said she would challenge the endorsement.

The party is also at odds with its chapter in the Huila chapter, which wants a different candidate than the one pushed forward by Bogota.

The leftist opposition is no exception to the rule. While Lopez’ candidacy stands relatively firm in Bogota, her party is at odds with its local chapter in Cali.

Back to the actual agenda

With Santos’ basis of governability temporarily in chaos, the government will have difficulty getting Congress to unite as peace talks with the talks progress.

On Monday, a unilateral rebel ceasefire came into force amid international pressure on the president to swiftly reciprocate and deescalate the violence.

Meanwhile, the president is trying to accelerate the talks that seem to have come to a halt about the question how to take responsibility for the 7 million victims generated by the armed conflict that has been waging since 1964.

At the same time, Congress has a number of major projects pending in regards to modernizing Colombia’s road and and digital infrastructure, and far-stretching rural reforms introduced by the president in the annual inaugural speech.