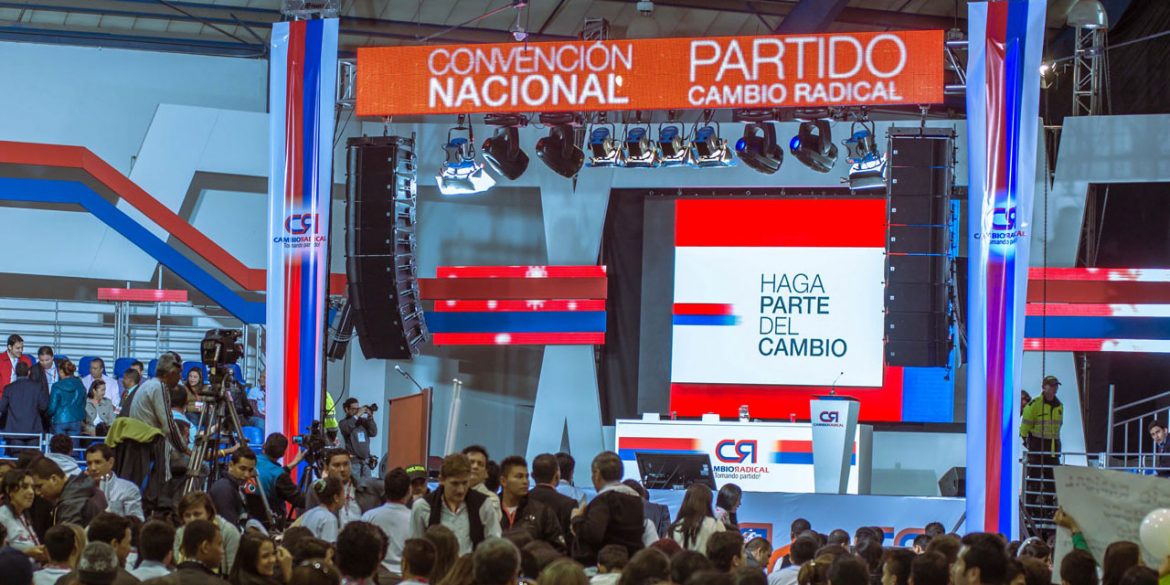 Radical Change is a political party led by former Vice-President German Vargas. The party was founded in protest of links between the Liberal Party and drug traffickers, but ended up teaming up with paramilitary groups.

On January 15 1998, a disgruntled group of Liberal Party politicians held a convention to create a new political movement with a liberal origin and ideology, but one separate from the traditional Liberal Party that at the time was marred by a major scandal over drug money being used to help elect Liberal President Ernesto Samper (1994-1998).

The convention of the new movement coincided with the Liberal Party’s national convention in which party leaders chose Horacio Serpa, Samper’s right-hand man, as the presidential candidate.

In the congressional elections of March 1998, the “Coalition” won five senators and nine representatives, and with their support, Conservative Party candidate Andres Pastrana was elected as president.

The birth of Radical Change

A year later, the party held an internal vote and decided the party would support the presidential aspirations of Alvaro Uribe, who had also left the Liberal Party in disagreement with Serpa’s second run for the presidency in 2002.

Uribe only had 2% of preference in national polls at the time, and no other political party was supporting him.

The March 2002 congressional elections saw the Radical Change party elect five senators and 10 representatives. In the presidential elections, their support definitively contributed to the landslide victory of the independently running Uribe, who was elected president in the first round.

The party took part in Uribe’s governing coalition made up of the Conservative Party and a number of Radical-Change-like splinter parties, and stayed there until 2010.

In 2006, the party won 15 Senate seats and 21 in the House of Representatives. Vargas won more than 230,000 votes; twice the number obtained by the following senator, and became one of the most active voice in the Senate.

However, things turned sour that year when demobilized former commanders of the paramilitary group AUC accused several Radical Change congressmen of having won their seats in the 2002 and 2006 election with paramilitary support.

Eight congressmen and former congressmen of Radical Change were arrested and sent to prison for using paramilitary power and money to get elected.

The scandal also implicated Vargas, who saw himself investigated for alleged ties to AUC commander “Martin Llanos,” whose support Vargas allegedly sought for his 2002 election to the Senate.

However, in 2013 the Supreme Court ruled that these accusations were unfounded and the Radical Change leader was absolved of all charges.

The judicial pressure on the Uribe coalition and the consequences for the Radical Change party ended its unconditional support for the president while preparing the presidential ambitions of its own leader.

When the biggest party in Congress, the U Party, proposed to change the constitution to allow the president to run for a third term in 2010, Vargas broke with the coalition line. The senator opposed the bill together with the Liberal Party and other opposition parties on the left after which he resigned his seat in the Senate to be able to run for president himself.

However, Vargas’ breaking with Uribe caused a division within the party and a number of lawmakers formally switched to the U Party.

Congress voted in favor of Uribe’s third election bid, but the bill was deemed unconstitutional by the court early in 2010.

Vargas finished third place in the first round after Antanas Mockus (Green Alliance) and the eventual winner, Juan Manuel Santos, who ran on the pro-Uribe U Party ticket.

Following his election, Santos moved away from Uribe and asked Vargas and other critics of Uribe to join his cabinet. Radical Change took part in Santos’ “Coalition of National Unity.”

When peace talks with rebel group FARC began in November 2012, the party offered their approval and criticized Uribe for opposing the negotiations.

2014 saw the party in coalition with Santos to be re-elected, with Vargas as his running mate.

The party won less votes than in 2010, regaining a senator but losing a seat in the House.