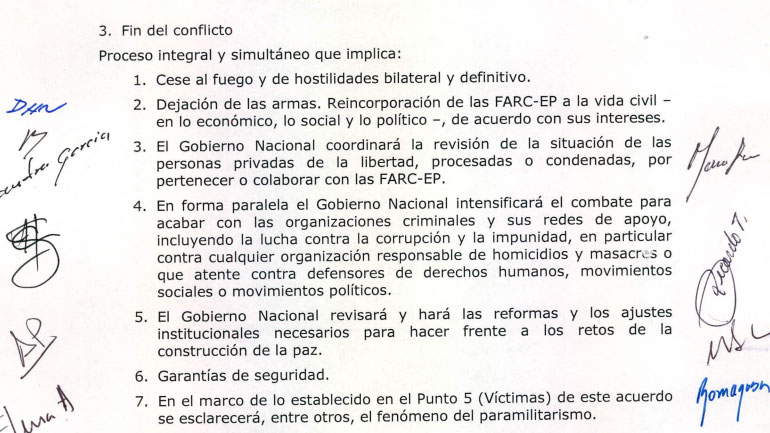 While a lot has been achieved in three years of peace talks, negotiators of Colombia’s government and FARC rebels still have a number of highly controversial issues on the agenda.

Following a holiday break, the negotiators of the parties that have been at war since 1964 returned to their negotiation table in Havana, Cuba.

So far, the parties have reached agreement on the FARC’s inclusion to politics, a far-stretching rural reform, the rebels’ abandonment of drug trafficking, victim compensation and justice.

The last point on the agenda, “End of Conflict,” is unlikely to cause the talks to fail as both the government and the FARC have said the negotiations have reached a “point of no return.”

Nevertheless, the following issues contain bitter pills to swallow for both the FARC and the government.

The most imminent point on the agenda is a bilateral ceasefire.

Since July last year, the FARC have been largely upholding a unilateral ceasefire and the government has agreed to end all air strikes on guerrilla camps. While ground offensives have drastically reduced, the military is still carrying out operations aimed at arresting or killing FARC members.

Nevertheless, increased confidence in the opponent and major pressure from the international community led the government to relax non the issue.

Since December 2013, the two parties have created sub-commissions who have since been negotiating a bilateral ceasefire.

For the FARC to demobilize, the 51-year-old guerrilla group will have to concentrate its forces in designated locations where guerrilla fighters and militia members can registered as demobilized combatants and apply for reintegration benefits.

Additionally, the concentration of forces will allow the immediate recognition of guerrilla units that refuse to submit to transitional justice and choose to continue operating underground. Some units and commanders have already indicated not to be interested in a demobilization, mainly in areas where local FARC unit commanders have close ties to drug traffickers.

The basic dilemma here is whether the FARC will come to the State or the State will come to the FARC. While a reduced number of concentration sites will make verification of compliance easier and cheaper, it increases the chance of attacks on guerrillas on their way to the agreed sites.

The FARC has so far refused to say how many people are expected to demobilize. Government and media estimates range between 20,000 and 40,000.

Through the decades of conflict, the FARC has gathered an impressive stockpile of weapons, ranging from home-made guns and landmines to professional grenade launchers and tons of explosives.

Instead, the guerrillas proposed to surrender their weapons either to a third party or a civilian organization that can, for example, use the weapons to display in a historical museum.

The government is weary that a large numbers of weapons remain hidden in jungle caches as a sort of security measure for the guerrillas, who still distrust the state, and the government of President Juan Manuel Santos in particular.

When paramilitary umbrella organization AUC officially demobilized between 2003 and 2006, a number of paramilitary units kept their arms and formed neo-paramilitary groups when they felt betrayed by the administration of former President Alvaro Uribe (2002-2010).

The biggest of these neo-paramilitary groups, “Los Urabeños,” will in effect become Colombia’s largest illegal armed group in the event of a peace accord with the FARC.

Following peace talks with former President Belisario Betancur in 1985, the FARC joined other leftist groups to form the Patriotic Union (UP), a radical left political party that performed surprisingly well in the elections that followed. However, paramilitary groups and extremist elements within the military began one of the bloodiest extermination campaigns, killed thousands of UP leaders and sympathizers.

The genocide traumatized the FARC and ended peace efforts. Instead of entering politics, the guerrillas responded by massively kidnapping civilians and major territorial military offensives that, combined with violence by the anti-guerrilla paramilitary groups led to one of the most violent chapters of the armed conflict.

To prevent this from happening again, the FARC wants to government to fully dismantle paramilitary structures that already have become Colombia’s primary human rights violator and have begun settling in what currently are territories controlled by the rebel group.

The government, however, has long insisted that the country’s paramilitary groups have demobilized, leaving nothing but a criminal threat.

For the ongoing ties between paramilitary groups and the military to end, the government would have to purge the military, which already has resisted the peace talks and only barely is kept on board.