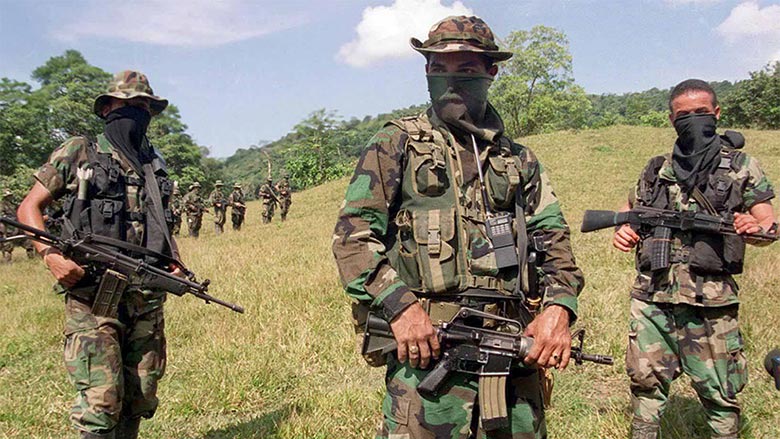 Colombia’s largest rebel group, the FARC, is holding peace talks in order to become an unarmed political organization. However, one of the things threatening this possibility is a phenomenon older than the guerrillas: Paramilitary forces.

According to the FARC, their demobilization is unfeasible unless these right-wing paramilitary forces are also dismantled.

The left-wing rebels fear that once the FARC has demobilized, these right-wing illegal armed groups will target reintegrating rebel fighters like they did in the 1980s and 90s when thousands of leftist political activists and politicians were assassinated in what effectively ended the FARC’s first attempt to enter politics.

In order to push the Colombian government to take action, the FARC shared detailed guerrilla intelligence about alleged existing paramilitary structures across the country, the location of their bases, and possible links to military battalions and local politicians.

Officially, these paramilitary groups no longer exist in Colombia. The AUC, the largest paramilitary organization in the history of the country, demobilized 27,000 men and women between 2003 and 2006.

However, a new generation of paramilitary groups called BaCrim have since emerged from the AUC.

Sometimes in conjunction with security forces, these neo-paramilitary groups are already killing rights activists and in at least one case have explicitly threatened to kill reintegrating former FARC fighters.

Like the FARC, the paramilitaries use violence and terror to influence the political course of the country, similar to the White League in the United States after the end of the Civil War or the Black Hand in Serbia just before World War 1.

The AUC, officially founded in 1997, was also not the first paramilitary force. In fact, it was an umbrella organization that united several existing paramilitary groups that had been active since the 1980s.

A paramilitary story older than the FARC

The first generation of paramilitaries were introduced to Colombia between the late 1950s and the early 1960s by the US Military in order to curb a growing number of communist enclaves that had formed in the countryside and rejected the authority of the central government in Bogota.

US Lieutenant-General William Yarborough told the US Joint Chiefs of Staff in 1959 that Colombia needed a military-civilian organization that “should be used to pressure toward reforms known to be needed, perform counter-agent and counter-propaganda functions and as necessary execute paramilitary, sabotage and/or terrorist activities against known communist proponents. It should be backed by the United States.”

What followed was a US political-military strategy called “Plan Lazo” that from 1962 onward formed paramilitary “civil defense” groups that worked together with the Colombian military to curb this increase in armed leftist political activity in the countryside.

In 1964, following years of military pressure by both the state forces and these paramilitary groups, the FARC officially formed in the central Tolima province and the ELN formed in the north.

Between 1965 and 1968, Presidents Guillermo Leon Valencia and Alberto Lleras formalized paramilitary groups through a series of decrees and bills that allowed the military to deliver weapons to paramilitary forces and attack the multitude of newly-formed guerrilla groups like the FARC and ELN.

A 1969 military manual said that commanders should organize “military-type organization made up of civilian personnel in the combat zone, which are trained and equipped to undertake operations against guerrilla groups that threaten an area or to operate in coordination with combat troops.”

These groups did not only attack the FARC, but were accused of carrying out attacks on communists and presumed communists in the late 1970s.

Nevertheless, their political aim continued to be the extermination of leftist elements in Colombian society and politics.

Exterminating the leftist UP

When in 1985 President Belisario Betancur (Conservative Party) began peace talks with the FARC and allowed the guerrillas to join unarmed leftist groups to form the Patriotic Union (UP) political party, paramilitary groups — with continued help from the military — began a political extermination campaign not seen since “La Violencia” in the 1940s and 50s.

The violent response of the guerrillas was responded by the government of President Cesar Gaviria (Liberal Party) with a special decree, again allowing the forming of armed self defense groups, or Convivir, as they were called.

Fueled by drug trafficking and with broad support from sectors within the military and mainstream politics, the AUC became a paramilitary organization unprecedented in size and power.

Foundation of the AUC

In 1997, and in conjunction with elements within the military, the AUC began a major territorial offensive to exterminate the FARC while strengthening ties with politicians.

With both the guerrillas and the paramilitaries engaged in offensives fueled by their illegal businesses, the end of the 1990s saw some of the worst levels of violence in both the cities and the countryside and Colombia was on the border of becoming a failed state.

The United States, that had been combating Colombian drug traffickers for decades, got involved in 1999 with Plan Colombia. In 2001 it put both the AUC and the FARC on its list of international terrorist organizations.

The paramilitaries then decided to engage in peace talks with the Colombian government and the groups belonging to the AUC formally demobilized between 2003 and 2006.

The demobilization and subsequent paramilitary testimonies revealed the extensive ties between the AUC and Colombia’s military and mainstream politics; 60 (former) congressmen and more than seven (former) governors have been sentenced to prison for having used the paramilitaries to get elected in the 2002 and 2006 congressional elections.

The AUC proved to even have contributed money to the 2002 presidential campaign of former President Alvaro Uribe, whose brother is on trial for allegedly founding a paramilitary group of his own in the 1980s. Uribe’s cousin, a former senate president, has been convicted for his collaboration with the AUC.

Following the formal demobilization, mid-level commanders of the groups that either neglected to demobilize or returned to the ranks filled the void left by the incarceration of the AUC’s top leaders and formed a new paramilitary, or neo-paramilitary, group to recover their former group’s criminal enterprises and continue threatening and killing rights activists, reintegrated former paramilitaries and local politicians.

The biggest of these groups, Los Urabeños, has since allegedly exceeded the ELN, Colombia’s second largest guerrilla group, in size and allegedly tried to influence the 2014 elections, implicitly endorsing the reelection of President Juan Manuel Santos.

Several mayors and one governor, mainly from the Caribbean coast, have since been arrested on charges they collaborated with the neo-paramilitary group while members of the military were arrested for providing arms to the group.

While significantly less effective than the AUC, other groups like the Rastrojos and the Aguilas Negras continue to exercise political pressure mainly through death threats.

According to the FARC, these groups can still count on a high level of tolerance from the security forces across the country, leaving a major security risk for the FARC’s demobilizing fighters and unarmed leftist groups opposing Colombia’s mainstream political forces.