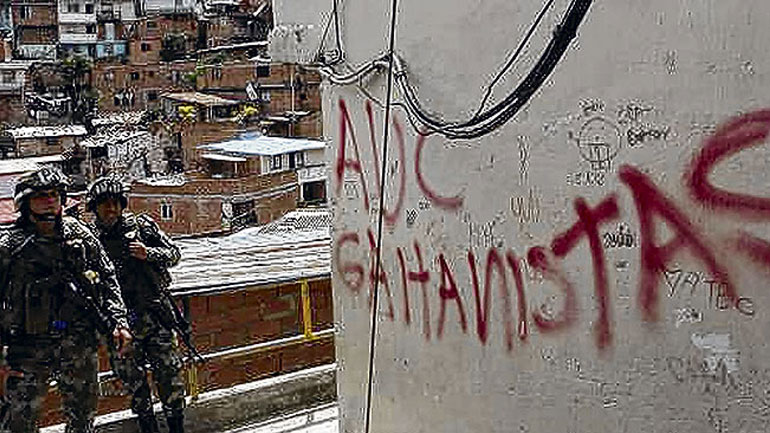 In the years that leftist rebel group FARC has been negotiating peace with the government, paramilitary successor group “Los Urabeños” nearly doubled its territory and has settled in areas traditionally under guerrilla control.

The Urabeños are Colombia’s most powerful drug trafficking organization and the main offshoot of the AUC.

This paramilitary organization fought leftist forces and usurped drug cartels’ businesses between 1997 and 2006 when its last block formally demobilized.

However, under the leadership of the late AUC founder Vicente Castaño and one of his subordinates, “Don Mario,” thousand of AUC members remained in arms and maintained control over some of the AUC’s main drug trafficking routes in the Uraba region.

From AUC to AGC

After former President Alvaro Uribe extra-judicially extradited the AUC leadership to the United States, the Gaitanista Self-Defense Forces of Colombia announced its existence in 2008.

“Considering the noncompliance of the government to the peace process carried out with the United Self-Defense Forces of Colombia (AUC) and the advances of guerrillas seeking control of areas where the self-defense forces exercised control for many years, we feel obligated to continue our anti-subversive fight,” said the group in one of its first public statements.

If the FARC demobilizes next year as planned by both the rebels and the government, the Urabeños — who outgrew rebel group ELN a few years ago already — will become Colombia’s largest illegal armed group with an estimated 3,000 armed members, and ongoing ties to the security forces and local corrupt political dynasties.

According to the latest report by conflict monitoring group Indepaz, the neo-paramilitary group in 2014 was able to increase its presence in the central Colombian provinces Meta and Guaviare, long among the FARC’s strongholds and a region that is one of the country’s main coca cultivation areas.

A state in denial

The Uribe administration initially denied the announced continuation of the paramilitary forces the former president falsely claimed to have dismantled.

When increased paramilitary violence became impossible to ignore, the authorities began referring to the still mobilized paramilitary groups as “criminal bands” or BaCrim, disassociating the groups from the paramilitary AUC from which they were formed.

But while the authorities downplayed the mobilized paramilitaries’ importance, the Urabeños carried out a number of territorial expansions, using the AUC’s old structures to retake territory lost to other paramilitary successor groups like ERPAC and Los Paisas.

First, the Urabeños consolidated control over the paramilitaries’ traditional stomping ground in the Antioquia and Cordoba provinces in the northwest of the country.

In 2011, the group began a territorial expansion along the Pacific coast, into territory that at the time was controlled by the Rastrojos, an offshoot of the now-defunct Norte del Valle cartel that operated from around Cali.

Pressure on the Rastrojos by both Colombian and US authorities, and the violent expansion of the Urabeños into Rastrojos territory, spurred the neo-cartel’s leadership to surrender to US authorities in 2012.

Peace talks with the FARC

In August 2012, the FARC agreed to peace talks with the Santos administration that included the guerrillas’ abandonment of drug trafficking activities, mainly carried out in the Bajo Cauca region in Antioquia, the Magdalena valley, the northeast of Cauca, the Meta and Guaviare departments, and along the borders with Venezuela and Ecuador.

With the help of mid and low-level FARC commanders, the Urabeños strengthened their control over Bajo Cauca and were able to take control of the Magdalena valley where rival FARC units had been weakened by paramilitary and military operations in respectively the 1990s and the 2000s.

The FARC teamed up with the ELN and the guerrillas maintained control of coca fields along the Venezuelan border.

Together with the Rastrojos, the FARC also maintained control over coca cultivation along the Ecuadorean border.

However, as the Indepaz study showed, the Urabeños were able to settle in Meta and Guaviare following infighting in ERPAC, another AUC offshoot that had refused to demobilize.

The FARC, once the AUC’s arch enemy for both ideological as well as drug-related reasons, has recently increased its calls to dismantle the existing paramilitary structures and considers it a condition for its demobilization.

When the rebels in the 1980s helped form a political party, the Patriotic Union, paramilitary forces that would later form the AUC carried out an extermination campaign that cost the lives of thousand of party members.

The FARC fears the same will happen when their members lay down their weapons and try to reintegrate into society.

Santos has announced numerous offensives targeting the neo-paramilitaries over the years, but with adverse results; Since Santos took office in 2010, the Urabeños have expanded their territory from 160 to 304 municipalities, and are now active in almost one third of Colombia’s national territory.

A FARC demobilization is set to cause a vacuum in Colombia’s drug trafficking industry with only one precedent: the demobilization of the AUC. And it is the Urabeños who stand in prime position to fill the void.

The president has yet to respond to the FARC’s demand for paramilitary structures to be effectively dismantled. If that situation does not change, it will leave Colombia’s main public security threat, the paramilitaries, intact and with the military capacity to undo any security advances gained from the demobilization of the guerrillas.