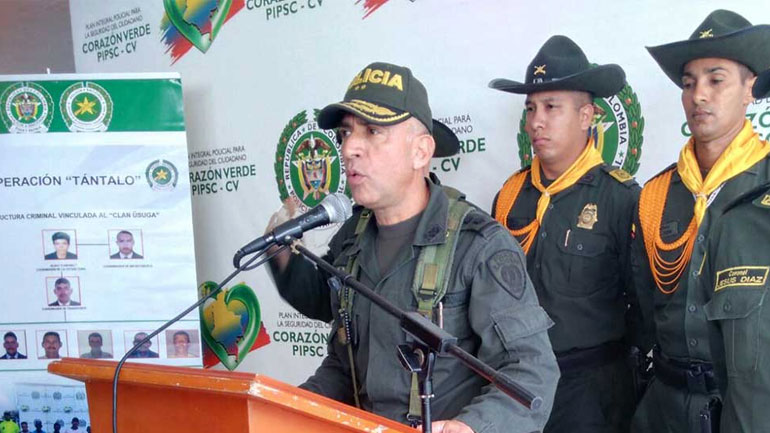 The police general in charge of a massive, but unsuccessful manhunt for Colombia’s most important drug lord is investigated for allegedly maintaining ties to narcos since Pablo Escobar.

Since the beginning of the year, General Luis Eduardo Martinez has been carrying out the largest manhunt since Escobar.

The manhunt has unsuccessfully sought to either capture of kill “Otoniel,” the supreme leader of “Los Urabeños,” Colombia’s most powerful drug trafficking organization and heir of right-wing paramilitary group AUC.

The news broke on Monday when the Senate considered the Martinez’ proposed promotion.

The senate commission considering the promotion received a number of high-profile testimonies in which Martinez is accused of having maintained ties to Escobar’s Medellin Cartel, former AUC commander “Don Berna” and the “Oficina de Envigado,” the Medellin crime syndicate founded by Colombia’s most famous narco.

Among those accusing the general are Martinez’ former colleague General Mauricio Santoyo, who is currently in prison in the United States for his ties to the same drug lords and criminal organizations.

Santoyo’s allegations have been supported by former commanders of the paramilitary AUC, Salvatore Mancuso and “Macaco.”

Martinez, who was accused of paramilitary ties in 2012 already, denied the allegations.

“The Prosecutor General’s Office certified to me yesterday that there is not investigation against me because of the paramilitary declarations. The same they said in 2012,” Martinez told Bogota newspaper El Tiempo.

The police official also boasted his “very good” relations with the CIA and DEA, the US law enforcement agencies that “are key in the Police’s pursuit of the ‘Clan Usuga’,” better known as “Los Urabeños.”

Martinez did not say that he had asked a similar certificate from the Inspector General’s Office, in charge of disciplinary investigations against government officials.

The IG office announced Monday it was carrying out four separate preliminary investigations against Martinez over his alleged ties to drug traffickers and paramilitaries. The general had asked for an investigation hoping this would clear his name.

The sudden political storm forced senate president to propose to suspend the general’s promotion procedure until investigators either confirm or deny the allegations.

Colombia’s security forces have long been accused of maintaining ties to right-wing paramilitary groups. Several generals are in prison in Colombia. Two of former President Alvaro Uribe‘s security chiefs are imprisoned in the US.