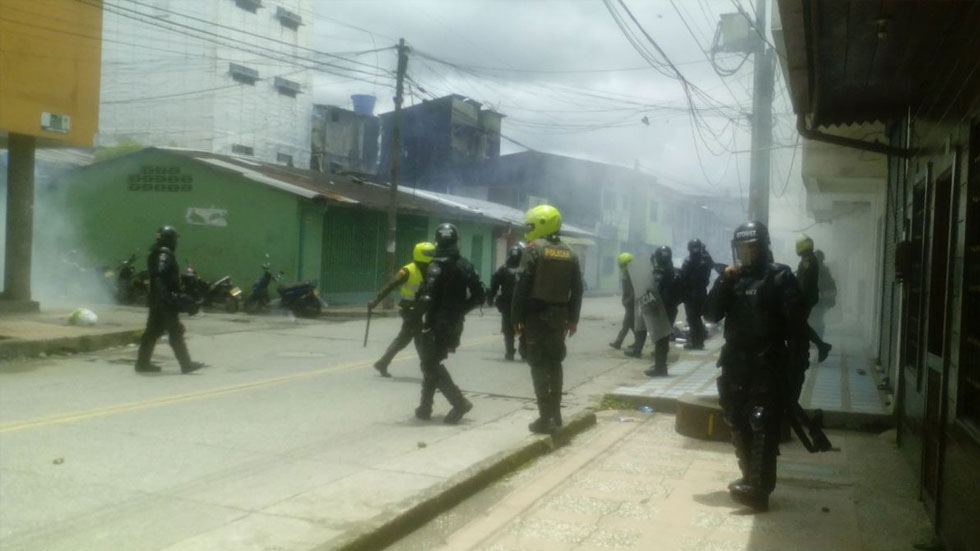 While the president and his political allies are trying to convince Colombians to support their efforts to end a 52-year-long war with the FARC, the same president is increasingly disliked over his handling of social protests, most recently in the western Choco province.

Poverty levels in Choco exceed 65%, spurring its inhabitants last week to massively go on strike to demand measures to effectively curb extreme poverty and prevent the collapse of the province’s health and road systems.

Since then, schools, shops and public transport has been shut down.

Instead of effectively negotiating an end to the mass protests, Santos sent riot police that clashed with protesters in province capital Quibdo, further infuriating the predominantly black locals who have been demanding better government for decades.

To make matters worse, the government was publicly embarrassed after claiming it had reached agreement with the protesters, which proved a big fat lie, according to the Choco residents.

Instead of curbing the most recent unrest, Monday is likely to see an increase in protests as some 40,000 people are expected to take to the streets in Quibdo while shops, public transport companies and schools in the entire province remain closed.

The protests couldn’t have come at a worst moment for the president who has bet his political legacy on a peace deal with the country’s oldest and largest rebel group and needs public support to ratify the deal.

A plebiscite that will define the fate of the peace talks is expected to be held within weeks or months.

However, the government’s violent handling of the protests and its inability to establish a meaningful conversation with protest organizers is harming chances Colombia will approve the peace deal proposed by Colombia’s most unpopular president in decades.

This peace deal is fiercely opposed by the conservative opposition and a significant portion of society, which is in disagreement with the FARC’s participation in politics and the judicial leniency granted to war criminals who collaborate with justice.

The combination of fierce opposition to the peace deal with one of the country’s two determined terrorist groups and the rejection of the violence used in legitimate social protests have steadily pushed the president’s popularity downward.

Santos’ approval rating has been dropping steadily since he took office and took dives after incidents in which social unrest was met with police violence, causing mass indignation on social media.

The most significant drops in Santos’ approval ratings occurred right after social unrest similar to the one currently taking place in Choco.

Particularly an agrarian strike that was held in 2013 sent the president’s approval rating spiraling down amid broad disapproval of the violence used in the protests and even the president’s claim that the strikes that were paralyzing the country ‘do not exist.”

The same farmers, joined by truckers, went on strike again earlier this year claiming the government had broken its word on agreements made to end the first strike, again sinking Santos’ approval rating.

In one poll, the president’s approval rating hit an unprecedented low, 12%.

Protests have also emerged in Catatumbo, another chronically neglected region in the northeast of the country, and in south Colombia where farmers claim fracking operations are killing their businesses.

Colombians’ almost absolute rejection of their president’s handling of these domestic crises could increase the chance that Colombians reject the deal to end 52 years of violence with the FARC in protest of how Santos is handling peaceful dissent.

It almost definitely makes the president the weakest link, maybe even toxic, for the broad political coalition that seeks to end the country’s armed conflict.