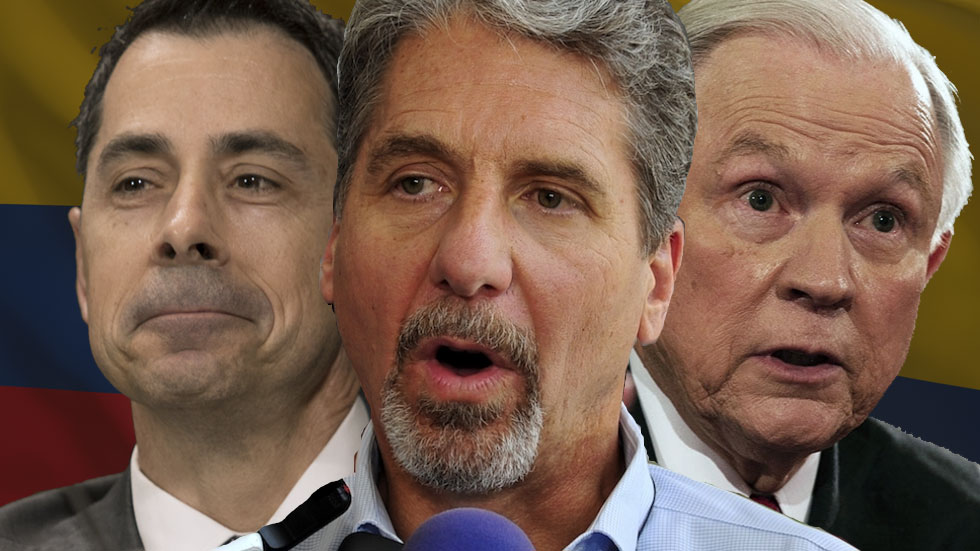 Colombia’s state institutions — with the help of top US officials — are undergoing a major anti-corruption purge in a joint attempt to allow the country’s government to effectively implement peace while fighting state corruption and drug trafficking.

The most eye-catching result has been the arrest of the country’s top anti-corruption prosecutor, who was charged by a US court on charges of bribery taking place on American soil last month.

While the United Nations and the European Union have been focusing on peace-building in the South American country, the US has increased efforts to prosecute top military and judicial officials accused of ties to drug trafficking and go after drug trafficking paramilitary groups with ties to regional elites and state officials.

US to increase the use of extradition as anti-corruption tool

While the former anti-corruption chief is awaiting extradition, two former presidential security chiefs of former President Alvaro Uribe, whose family had intimate ties to the Medellin Cartel, are already in a US prison.

Following the arrest of Colombia’s chief anti-corruption prosecutor, the United States’ Acting Assistant Attorney General Kenneth Blanco traveled to Colombia for a meeting with Prosecutor General Nestor Humberto Martinez and demonstrate the US’ interest in the effective prosecution of corrupt state officials.

Assistant Attorney General Blanco reiterated his commitment to bilateral cooperation to successfully launch investigations, an exchange in information and mechanisms to seize assets compromised by illegal activity in both countries. In the same vein, the two state attorneys reaffirmed the decision to use strong instruments like extradition to deter the actions of corrupt officials.

Martinez will travel to Washington DC on July 18 to meet with US Attorney General Jeff Sessions to further strengthen ties between the US justice department and Colombia’s Prosecutor General’s Office, his office said last week.

The top US involvement to curb Colombia’s corrupt state system appears to be part of “Peace Colombia,” a bilateral pact that seeks to strengthen the South American country’s peace process and state apparatus.

Over the past week alone mass arrests were made in the prosecution office of the central Meta department where 21 were arrested and investigations at the Cartagena navy base where officials reportedly embezzled $2 million from funds from the Military Logistical Agency.

The arrests in Meta and the Navy investigation comes months after an apparent corruption purge in the southwestern province of Nariño where 15 prosecution officials were arrested over their alleged ties to drug traffickers, guerrillas and paramilitary groups.

US scrutiny on Colombia’s security forces

While Martinez and the US Department of Justice have been going after corrupt elements in the Prosecutor General’s Office, Colombia’s National Army has embarked on the mass replacement of commanders as part of a major reorganization.

While the mass reorganization of the military would not just allow the institution to be more effective in confronting Colombia’s post-FARC public security challenges, it would also effectively disrupt possible organized dissidence against the peace process or in service of drug trafficking groups.

The Colombian and the US military have long been working together to curb drug trafficking, but — aside the now-disarmed FARC guerrillas — have been hindered by corrupt elements within Colombia’s state security forces tied to paramilitary groups, regional elites and drug traffickers.

While going virtually unannounced, army commanders have already been replaced in some of Colombia’s key drug trafficking regions while US ambassador Kevin Whitaker has repeatedly shown his face in areas long battered by both political and drug trafficking violence.

This is the fourth time I have come to Necocli[, Antioquia] in order to get to know the results of the police, which demonstrates the commitment and interest my country shares in supporting law enforcement in its fight against drug trafficking and organized crime.

US knows its targets in Colombia

The United States and Colombia have long worked together to curb the trafficking of Colombian drugs, primarily cocaine, to the American consumption market, the world’s largest.

The recently-disarmed FARC used to control a large part of Colombia’s countryside, protecting and “taxing” drug traffickers and coca cultivators.

Since their signing of a later revised peace deal with Colombia’s government in September last year, dissident group of the FARC and the AUC, demobilized under Uribe, President Juan Manuel Santos‘ predecessor.

With the country’s largest and longest-living guerrilla group demobilized and disarmed by the UN, Colombia’s national authorities are now receiving major support from both sides of the Atlantic in an international effort to effectively push through peace.