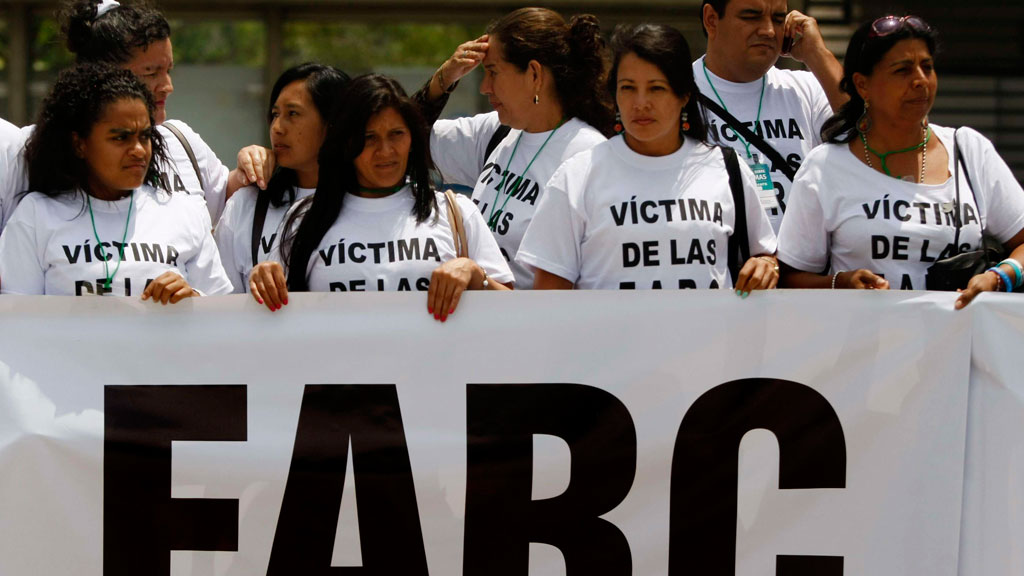 A group representing some 1,500 FARC victims said that they were “ignored” during Thursday’s commemorative day for victims that was used by the government and social organizations to support ongoing peace talks with the group’s victimizers.

Tens of thousands of Colombians took part in marches across the country to commemorate the millions of victims left by more than 50 years of political armed conflict between the state and illegal armed groups.

Though the march promoted support for war victims, many felt the day took political overtones, and became more of a demonstration in favor of peace talks with the FARC that are underway in Havana.

Thousands in Colombia march in support of conflict victims

President Juan Manuel Santos, coalition and leftist opposition parties, and civilian protesters used the commemorative day to reiterate support for the peace talks with the FARC that have been ongoing since November 2012.

The FARC victims’ group did not participate in the day’s events. Instead, they held a federation meeting, completely separating themselves from the march that was ongoing partly on their behalf.

Founder of the group Senator Sofia Gaviria – sister of former Governor Guillermo Gaviria who was killed by the FARC – asserted at the Senate meeting that they did not feel represented.

“We feel ignored,” said the Liberal senator. “I am very sad that a date has been institutionalized precisely to make victims visible, but it seems that it is only making some victims visible,” said Gaviria.

“The victims of the FARC have as many rights as any other victim in this country,” the senator asserted.

The group believes that it is a government strategy to have not responded to a list of demands they sent weeks ago to address the rights of the 5,000 affected Colombians that the group represents.

The Liberal politician explained how a lack of response from the FARC and Colombian government has left the group feeling overlooked.

In November “we sent the government and the guerrilla the 33 demands of the FARC victims, and we have not received a response on the matter,” Gaviria said.

Former General Herlindo Mendieta – also a leading figure of the victims’ group – said that they were never called to the mobilization, and therefore sought a different platform to advance their goals.

“We could say that we did not participate because the victims of the FARC are seeking our own space to seek a redress of our rights,” stressed the retired general.

The FARC victims on Thursday outlined demands for justice, truth and reparation, but primarily to be recognized as a group.

The guerrilla group, the largest and oldest in Colombia, has been negotiating peace with the government since November 2012. If successful, the negotiations will end more than 50 years of violence between the state and the rebels.