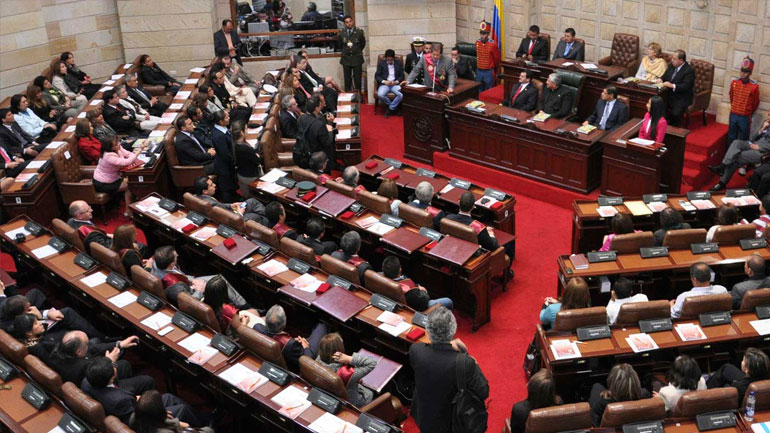 Colombia’s peace talks received a major blow from Congress after the Senate banned rebel group FARC‘s possibility to take part in politics, one of the key agreements to ending half a century of war.

In the second of eight debates on constitutional reforms necessary for an eventual peace, the Senate surprisingly sank the article allowing FARC members who renounce their weapons access to political participation, potentially causing a major dent in the prospect of a final peace agreement between the National Government and the country’s largest guerrilla group.

One of the key elements of the ongoing peace talks with the rebels is the FARC’s inclusion in politics, allowing them to pursue their Marxists ideals peacefully.

The FARC, who originally mobilized as a response to political exclusion in 1964, hold political participation as one of its most prominent goals in transitioning to a post-conflict Colombia and a top point on the agenda in Havana. With the door into Colombian politics recently shut by the Senate, the group’s leader Ivan Marquez voiced the FARC’s indignation towards the government’s new countermove.

“This peace process has to come out the other side. The reconciliation based on justice and democracy is the destiny of Colombia…It is a horrible act of malice that the Senate has denied the possibility of the guerrillas being involved in politics,” tweeted the FARC leader Tuesday.

Quickly reacting to clear some of the air, the Government announced Wednesday that the issue of the guerrilla’s participation in politics could be revived at any moment, and indicated that the point won’t remain permanently outside of the legislative process of the signing of the peace agreements in Havana.

The announcement was made by Minister of the Interior Juan Fernando Cristo, who told the press that the article was removed from the table due to specific changes within the draft, but that the issue “hasn’t totally been discarded.”

“We took the decision to eliminate the issue of political participation from Senate approval due to some modifications that were incorporated. The truth is it will be worth it to give it more debate and make more profound reflections concerning the issue,” stated Cristo.

More debate certainly appears needed in consideration of a survey released Wednesday, which found that 71% of Colombians would not agree to the political participation of members of the FARC secretariat.

33% of the same batch of respondents, however, believe the best option to resolve the armed conflict is a political negotiation with the FARC.

The survey carried out by the National Peace Prize asked 6,551 people in five major Colombian cities between August and September.

Although withholding the article concerning the FARC’s political inclusion, the Senate did approve Tuesday night the constitutional reform for peace — a proposal that includes mechanisms and tools to ensure compliance and loyalty to the agreements achieved by the Colombian government with the FARC guerrillas in Havana.

“We will surely make a revision as of next week,” Cristo stated, noting that the presidency of the Committee will meet with Congressmen to determine who will be sponsoring the bill for consideration.

The third debate concerning the article will occur under the First Committee of the House of Representatives as of Tuesday, November 17. From that moment, the initiative has a window of 29 days to be approved in the first round by Congress.

The two sides, negotiating in Cuba since late 2012, have promised to reach a final peace accord by the March 23, 2016. President Juan Manuel Santos said this week that a bilateral ceasefire could be declared in December.