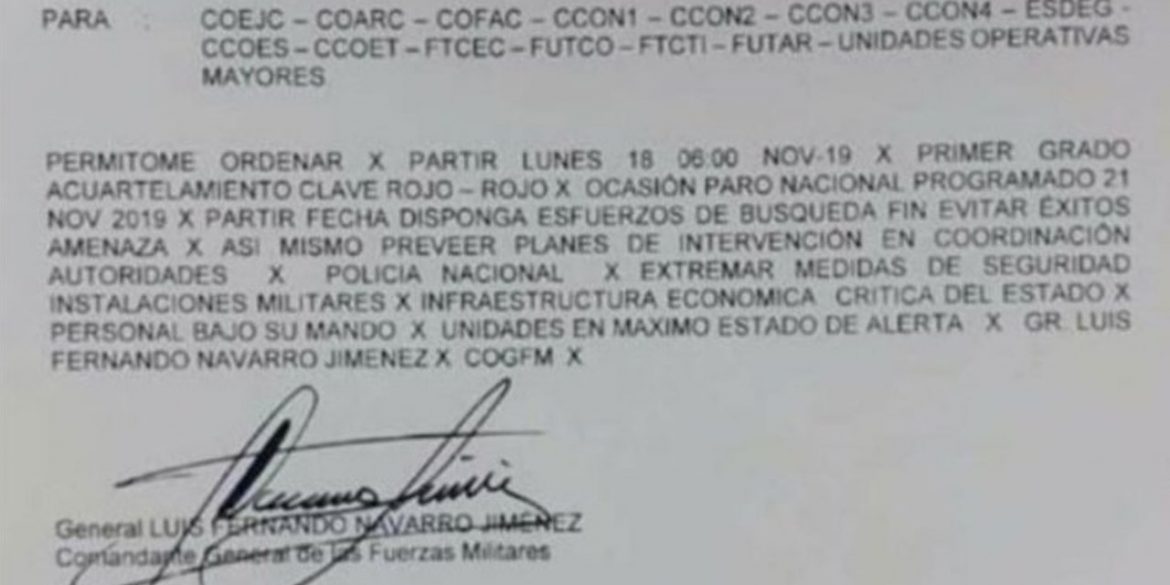 The commander of Colombia’s armed forces ordered the highest state of alert ahead of anti-government protests on Thursday.

The extraordinary measure follows swelling support for the national strike called by labor unions and the protests called by dozens of social organizations.

The highest grade of alert took effect on Monday 6AM and will last until Friday, according to the leaked order, and is generally called in the event of a foreign military threat.

The military alert is the latest in a series of escalations ahead of the anti-government protests that evidently have the unpopular government of President Ivan Duque on the tip of its chair.

While protests organizers have consistently called for peaceful protests, the government has consistently warned for violence and even expelled 11 foreigners on claims they sought to “affect public security and social order.”

The persistent stigmatization of the protests seems to have only fueled support for the protests; even Miss Colombia and football fan clubs have said they are behind them.

The national strike was called by labor unions in early October over controversial labor and pension reform proposals of the president’s party and business associations.

Students said they would join the strike after failed attempts to violently repress anti-corruption protests. The country’s national indigenous organization joined after an escalation of ethnic violence.

As the calls for protests became louder, organizations representing groups ranging from conflict victims to disabled people joined too.

During this period, protests in countries like Ecuador, Chile and Bolivia escalated into unrest.

While there have been scattered calls on social media demanding the resignation of the president, none of the protest organizers have gone this far.