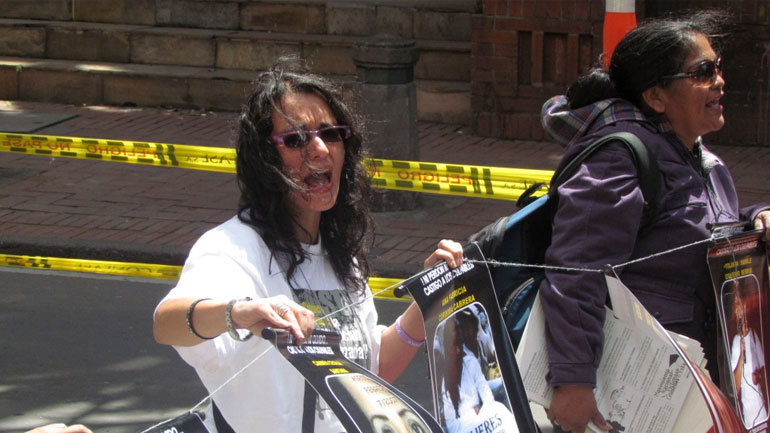 Women’s rights groups in Colombia are pressing their country’s government to investigate cases of sexual violence committed by the military and its now-defunct paramilitary allies.

The women’s rights defenders met with both the government and the opposing rebel group known as FARC last month in Havana, where ongoing peace talks seek to bring an end to a conflict that has gone on for half a century.

While much attention has been given to allegations that the FARC committed acts of sexual violence towards civilians and its own soldiers, women’s rights groups insist that the problem is not one-sided.

A coalition of ten of Colombia’s women’s rights groups issued a statement on the matter while in Havana, expressing concern “about the current emphasis the state is putting on investigating sexual violence perpetrated by the FARC, leaving aside the responsibility of state security forces, paramilitaries and other private actors.”

Armed groups on both sides have been known to force women into sexual slavery. Sexual violence has also been used as a fear tactic for taking societal and military control of territory during the 51-year-long conflict.

Officially, the government lists 11,300 people as having been victims of sexual violence directly tied to the war.

Many survivors face difficulties and fear when filing reports. According to UN special representative Zainab Hawa Bangura, a culture of chronic underreporting has developed.

Dozens of war victims have been flown to Havana in the last year to provide testimony to the seemingly endless list of atrocities and war crimes committed during the conflict, including many victims of sexual violence.

The importance of pushing both sides to admit to their respective sexual crimes is paramount when considering the peace process as a whole. Thus far, the two sides have made agreements on three of the five points being discussed : illegal drugs, land reform, and FARC reintegration into the political process.

Victims, another of the five key points in the talks, continues to be debated as well as the final point, which is an end to the conflict via bilateral ceasefire and laying down of arms.

Exactly how and to what extent victims will be compensated or in some other form aided remains on the table. The coalition of women’s rights groups will continue to push its own government to recognize its role in the conflict instead of simply highlighting the sexual crimes of the opposing FARC.