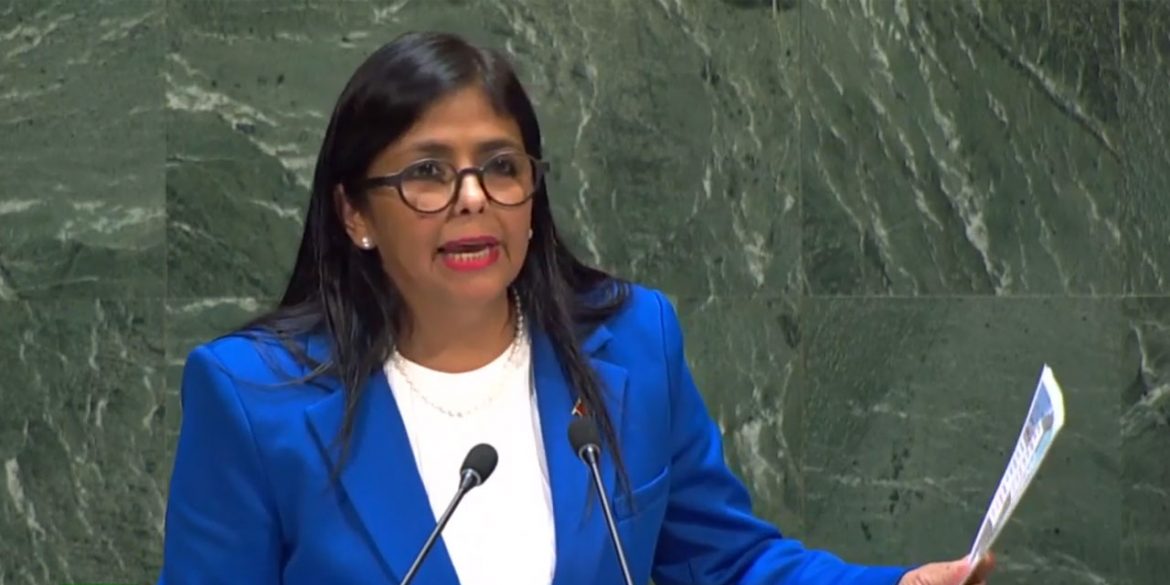 Venezuela’s vice-president told the United Nations on Friday that the use of fabricated evidence to support “narcoterrorism” justifies her government’s fear of “imminent aggression” from the United States.

On Thursday, Colombian President Ivan Duque presented UN General Secretary Antonio Guterres with a report, claiming to have “proof” that his Venezuelan counterpart Nicolas Maduro is colluding with Colombian guerrillas.

Local and international media demonstrated that at least four pieces of evidence were fabricated.

During her intervention before the United Nations’ General Assembly, Rodriguez took advantage to legitimize her controversial government and justify her country’s fears of “imminent aggression” from Washington DC.

The United States and its regional satellites are preparing aggression against Venezuela from Colombia, putting at risk the security and stability of this continent.

Colombia’s delegation left the room ahead of Rodriguez’ intervention.

The Venezuelan VP said that Duque’s use of fabricated evidence “has forced us to bring to this General Assembly precise and concise coordinates of the presence of camps where they are training terrorists to attack Venezuela.”

According to Rodriguez, these training camps are located near the northern Colombian cities of Santa Marta, Riohacha and Maicao.

Like Duque did the day before Rodriguez said that she would surrender this alleged evidence to United Nations Secretary General Antonio Guterres.

But unlike the Colombian president, the Venezuelan VP asked the UN to enforce Resolution 1373, which was adopted after the terrorist attacks on New York City in 2001 to force member states to act against alleged terrorists in their national territory.

The Colombian government’s use of fabricated evidence to prove Maduro is “harboring narcoterrorists” has further isolated Duque and US President Donald Trump.

Evidence that drug traffickers were involved in a US-sponsored operation by Venezuela’s opposition leader Juan Guaido to force aid into Venezuela had already embarrassed both the Colombian government and Trump’s Special Representative for Venezuela, Elliott Abrams.

With the exception of the US and Colombia, the majority of nations in the Americas and the European Union want Venezuela’s government and opposition to negotiate an end to the humanitarian and institutional crises, and restore democracy in the South American country.

Russia and China, who support Maduro, have also expressed their support for talks.

No mention of Venezuela’s internal crisis

In her speech, Rodriguez made no reference to her country’s humanitarian and institutional crises and broadly supported claims of gross human rights violations.

Since Maduro took office in 2013, Venezuela has increasingly become a one-party state.

The Venezuelan government has been accused of election fraud to stay in power both by world leaders and human rights organizations.

The multidimensional crisis in the South American country has spurred some 4 million Venezuelans to flee their country since 2015. Some 1.4 million of these people are estimated to be in Colombia.