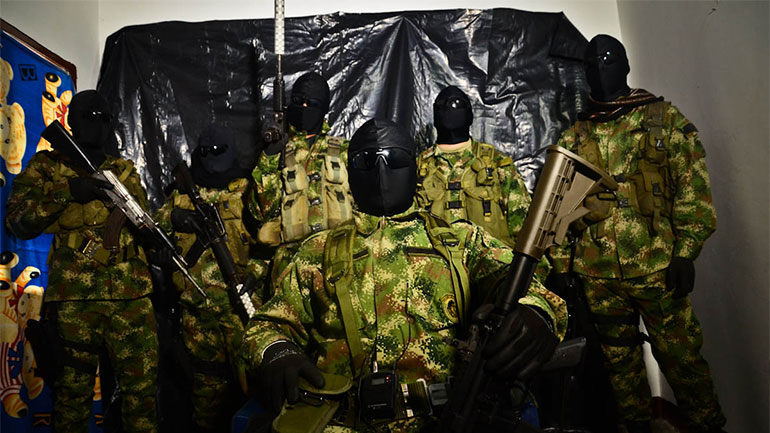 US military focus in Colombia shifts from rebels to paramilitaries

Colombia and the United States have formed an unprecedented joint task force they say will block paramilitary successor groups from using a peace treaty with the FARC to expand their power.

The joint task force precedes the possible congressional approval of an increase and shift in US aid to Colombia requested by President Barack Obama last week in his 2017 budget proposal.

While the Colombian government and the country’s largest leftist rebel group, the FARC, are negotiating peace, fears exist that groups formed during the demobilization of the right-wing paramilitary organization AUC will try to violently take over guerrilla-held territory and criminal enterprises.

The US has supported military efforts to combat the leftist guerrillas for more than 15 years, but is only now explicitly targeting the rebels’ right-wing rivals.

Avoiding an expansion of these neo-paramilitary groups is a matter of security for the US as well as for Colombia, US Ambassador Kevin Whitaker told Bogota newspaper El Tiempo. The neo-paramilitaries are not only sending cocaine to the US but are engaged in “extortion, kidnapping and assassination, fomenting violence in both countries,” he said.

The newspaper previously reported that Colombia has launched an offensive to stop these former paramilitary groups from taking advantage of a power vacuum after the FARC stand down.

To signal US commitment to the bilateral approach, Lynn Kirkpatrick, chief of the narcotics section at the US Attorney’s office in Miami, was in Colombia last week to coordinate operations with her Colombian counterparts.

The US is investing $4 million to help the Colombian task force, as well as involving elements of its own Drug Enforcement Agency (DEA), Federal Bureau of Investigation (FBI), and Immigration and Customs officials, officials said.

The paramilitary successor groups, such as “Los Urabeños,” formed during the demobilization of the government-supported AUC between 2003 and 2006.

These groups have become ruling powers in various regions of the country, profiting from drug trafficking, illegal mining, extortion and theft of fertile rural land. While the FARC has been negotiating with the government, Los Urabeños have nearly doubled the territory they control, according to independent conflict monitors.

With an estimated 3,000 fighters, Los Urabeños would be the largest illegal armed group in the country once the FARC disarms. The FARC has said it can’t disarm until it is confident the paramilitaries are also dismantled. And it has reportedly shared intelligence with the government about paramilitary operations and links to government officials.

It would be an important shift in policy for the Colombian and US governments to go after these paramilitary groups with full force. Until recently, the governments’ focus has been on warring against the FARC and the ELN, a smaller leftist rebel group.

But in November the military bombed a paramilitary training camp, saying they killed at least 12 members of Los Urabeños. That was first such aerial attack on a paramilitary group in the long history of the current wars.

Do these moves signal a permanent shift in policy as the countries attempt a transition from the 15-year old Plan Colombia, with its anti-leftist military focus, to a new so-called Peace Colombia, with an emphasis on peace-building activities?

The last time leftist rebels made peace and entered Colombia’s mainstream political system, they–along with many leftist activists who had not been guerillas–were met with a wave of assassinations by AUC’s predecessors. President Juan Manuel Santos knows it would be political suicide and economic disaster to let that episode be repeated.

But a key question for post-peace treaty Colombia is whether Santos will both protect the FARC’s fighters when they go mainstream and also follow through on a thorough-going attack to eliminate the neo-paramilitaries, who years ago overtook the guerrillas to become Colombia’s primary human rights violator.