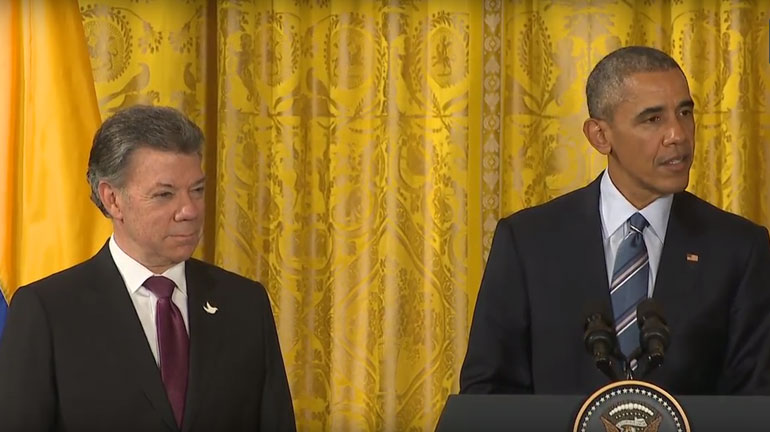 The United States will drastically ramp up its contributions to Colombia from $300 million to $450 million annually to support a peace process that seeks to end more than half a decade of armed conflict, President Barack Obama announced Thursday.

The $450 million is a major budget increase compared to the $300 million invested in Colombia last year.

To illustrate a change in aid from war support to support for peace building efforts, Obama said that Plan Colombia from now on will be called “Peace Colombia.”

According to local media, President had asked $500 million annually for a period of five years during which most former FARC fighters will be reintegrated and a series of agricultural and political reforms will be carried out.

Colombia received little under 300 million in 2015 and has received approximately 10 billion since Plan Colombia took force in 2001.

“The United States will work with you hand in hand,” Obama said next to a visibly content Santos, who has put his political legacy on the line in a strongly divided country.

“I’m proposing that more than $450 million will be devoted to helping to reinforce security gains, reintegrate former combatants into society and extend opportunities and the rule of law into areas denied them for decades,” Obama said.

While announcing the major peace investment, Obama stressed that the US “will keep working to protect our people as well as the Colombian people from the ravages of illegal drugs and the violence of drug traffickers.”

The FARC partly financed its 51-year-long military campaign against the state through drug trafficking and other criminal activity.

Ahead of his trip to Washington, President Juan Manuel Santos announced an increased effort to curb the influence of paramilitary successor groups as “Los Urabeños,” currently the country’s most powerful drug trafficking organization.

The US is not yet thinking of removing the FARC from its Foreign Terrorist Organizations list, said US ambassador Kevin Whitaker earlier Thursday, but in the event the rebels have disarmed “this will be worth considering,” echoing the words of the US’ Special Envoy Bernie Aronson.

Founded in 1964, the FARC wants to convert into a non-violent political movement, leaving behind a war that has left according to official estimates at least 260,000 dead and millions more displaced.

The group, being a target, has long criticized US intervention that has supported the guerrillas’ decimation through bloody military offensives ahead of peace the peace talks that began in 2012.