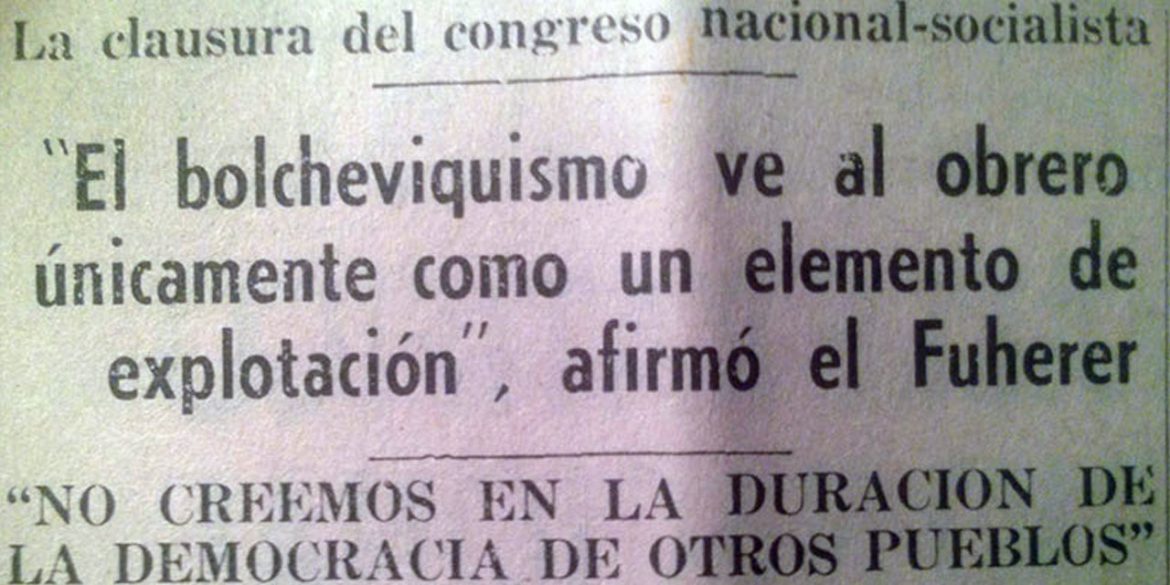 El Colombiano printed entire speeches of Hitler when The Holocaust had already begun.
From the editor

The crucial role of independent media in Colombia’s peace process

Independent news media are playing a key role in Colombia’s peace process, contrary to most the country’s traditional media that have a lot to lose.

With the exception of newspaper El Espectador, most Colombia’s newspapers have been linked to political powerhouses like the Liberal Party or the Conservative Party for more than a century.

This lack of independence have made these newspapers propaganda machines rather than news organizations. Most importantly, their owners have been tied to all kinds of criminal activity.

The concentration of power

Newspaper El Tiempo, for example, was owned by the family of former President Juan Manuel Santos until 2007. The newspaper, together with weekly Semana, continues to employ members of the Santos and Samper political dynasties.

Newspaper El Colombiano has been controlled by the Gomez and Hernandez families for a century and continues to promote these particular families political and economic interests rather than that of the public.

Both newspapers have questionable histories; when Colombia’s ambassador in the US, Francisco Santos, was editor-in-chief, he allegedly met up with paramilitary leader Salvatore Mancuso to discuss the formation of a paramilitary group in Bogota.

The Hernandez family has been sentenced for dispossessing land from displaced farmers while the Gomez family have a history of promoting far-right ideologues.

The introduction of TV in the 1950s didn’t change much. The country’s only two commercial television networks, RCN and Caracol, are in the hands of respectively the Ardila Lulle and the Santo Domingo families.

These two families own some of the country’s most powerful corporations that have both been accused of sponsoring paramilitary groups.

The impact on the reliability of the news

The concentration of power in the media alone has created a media culture that is perpetuating abuse of power that media in the US or Europe have long rooted out.

The conflict of interest of the media moguls have made their news outlets a major obstacle to the country’s peace process.

Radio and TV media that do speak truth to power and expose the corruption and war crimes of aforementioned powerhouses are neutralized in questionable ways.

For example, public news program Noticias Uno is taken off the air partly because Caracol allegedly quadruples its advertisement prices if a company also advertises with Noticias Uno. Grupo Aval, the owner of El Tiempo, withdrew all advertising from the news program after it began reporting on the corporation’s corruption practices.

Internet to the rescue

The only place where Colombians can get uncensored news is through foreign media or the internet, where multiple news websites are severely challenging the traditional media’s monopoly on information and exposing their corruption.

Websites like Verdad Abierta, Pacifista and Rutas del Conflicto have been key in reporting on the country’s armed conflict, exposing the ties between paramilitaries and the traditional media along the way.

Websites like Cuestion Publica, La Liga Contra el Silencio, Colombiano Indignado, La Silla Vacia and La Nueva Prensa have been instrumental in reporting on political corruption and abuse of power, exposing the role of the traditional media along the way.

Websites like Agencia Prensa Rural and Contagio Radio have been crucial in reporting on human rights, exposing the role of the traditional media along the way.

These new news sources, in all their pluriformity, have countered the traditional media’s hostility towards the country’s peace process that is likely to further expose the crimes of their owners.

“Fake news” may be a relatively new thing in your country, but Colombia’s media have been spreading propaganda and disinformation for more than a 100 years, often contributing to political violence and armed conflict.

El Colombiano, for example, reported in 1930 that “the persecution of the Catholic faith has begun” after the election of a liberal president. In 2002, the same newspaper reported that people from Medellin “applauded the arrival of the government” after the military carried out “Operation Orion,” one of the most traumatic war crimes in the history of the city.

The online media are now challenging the bullshit machines and have taken a leading role in fact checking, calling out disinformation on social media as well as traditional media.

This has contributed to the public’s increased disapproval of the media owned by the families that have robbed the country and fueled political conflict for more than a century.

Negative perception of the media

The new media’s anti-disinformation offensive and increasing success has triggered a crisis in the traditional media whose decreasing credibility and market share are evaporating their profits.

While the TV and radio networks have always had the power to neutralize competition and prevent pluriformity, they seem to lack the tools to combat the growing number of news websites that challenge their authoritarian narratives, dubious business practices and alleged complicity in war crimes.

This has created a crisis in the traditional media. Hundreds of journalists have been sacked, further weakening their ability to report the news.

Instead of sacking the politicians from their newspapers, they have been sacking actual journalists. They apparently do still not understand their business model ought to be based on speaking truth to power on behalf of the people instead of spreading propaganda on behalf of their friends.