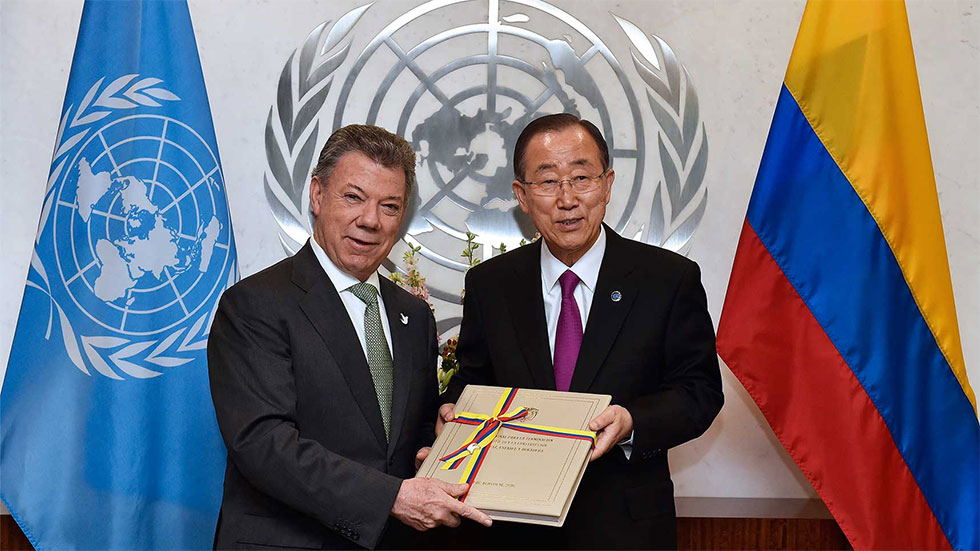 The historic deal will be formalized next Monday after which the United Nations will be monitoring the demobilization and disarmament of the FARC, by far the country’s largest rebel group.

While handing Ban the 297-page treaty “that will bring peace to Colombia,” Santos thanked the the secretary general for the support given by the UN to both the successfully concluded peace talks and the impending peace process.

Since the talks formally began in 2012, the United Nations has supported the initiative to negotiate a way out of an armed conflict that just since 1985 has left more than 265,000 dead, at least 45,000 missing and more than 7 million displaced.

This involvement will become much more intense come Tuesday next week when the FARC begins demobilizing and disarming its troops under the watchful eye of hundreds of UN observers.

For the next 180 days the United Nations will be responsible for the monitoring and verifying of the FARC’s effective dismantling as an armed group and transition to a political party.

Colombia’s electorate could still stop the process in its tracks with a referendum held on the accord on October 2, although multiple pollsters predict landslide approval.

Disregarding, the UN will then already be active in Colombia and facilitating the process.

Santos is on a visit to the United States and is set to speak before the UN General Assembly on Tuesday and meet with US President Barack Obama on Wednesday after which he will return for the final preparations of next week’s ceremony and one of the most significant peace processes in recent history.