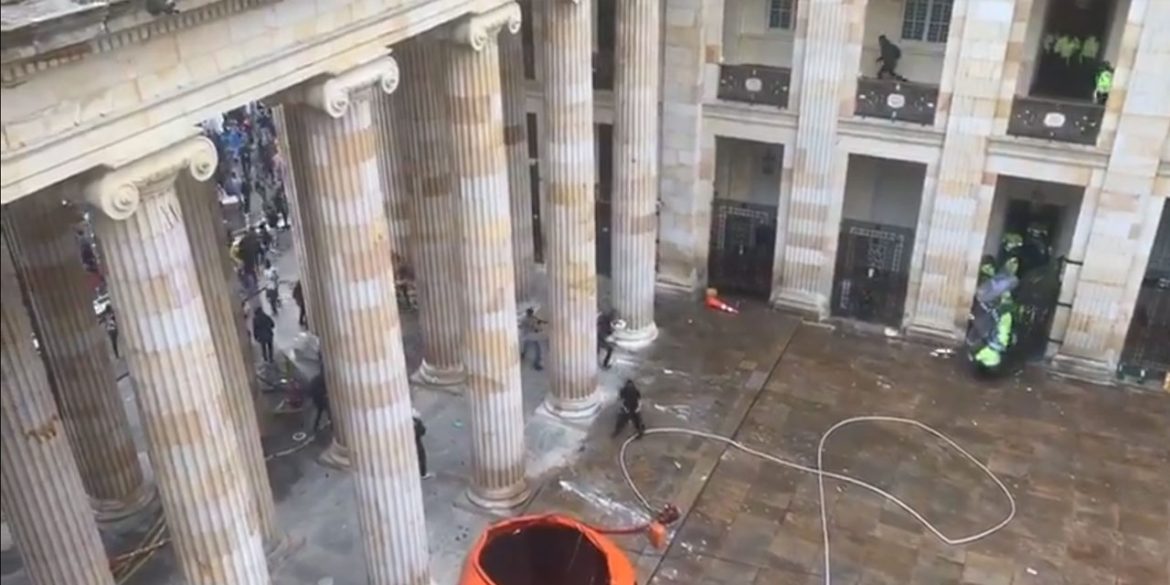 Peaceful anti-government protests in Bogota ended by hooligans and police

The violent incident ended a day of marches that went virtually without incidents.

Protesters present at the Bolivar square tried to contain the hooligans after they began throwing bottles at police and city hall.

Peaceful protesters were filmed trying to prevent the hooligans from throwing bottles and bricks at the city hall, at one point shouting “no hoodies, no hoodies!”

When the group began to take down nets that had been put up to protect the city hall and rioters tried to enter the building, controversial riot police unit ESMAD took over.

Within minutes the peaceful protests turned into chaos as protesters tried to leave the square that began filling with teargas.

Once the protesters had left, hooligans were seen throwing objects to police hiding behind a door in the capitol.

Earlier in the day, protesters expelled undercover policemen who were trying to infiltrate the march.

Multiple protesters expressed suspicion about the infiltrators at the Bolivar square with some claiming the surprise outbreak of violence was part of the police’s strategy to end a day of peaceful protests in violence.

Former Congressman Angela Maria Robledo (Green Alliance) published a video of a policeman changing clothes ahead of the violent outbreak, adding that “inciting violence is a strategy to ignore the march that we haven’t seen in Colombia in decades.”

Vice-President Marta Lucia admitted on Twitter that the violent ending of the protests did not obscure the fact that “the vast majority” of the tens of thousands of protesters out on the street in Bogota “were young people with a peaceful attitude.”

Throughout the day, the protests against the administration of President Ivan Duque in Bogota and the rest of Colombia seemed more like a carnival than a protest.

In Medellin, Colombia’s second largest city, no incidents were reported.

The mayor of Cali, the country’s third largest city, imposed a curfew after violence and looting broke out near the local university, miles from where the protests were taking place.

In the rest of the country, countless people opposing the government of unpopular government President Ivan Duque turned the national strike initially called by labor unions into a tremendous party.

What Colombia’s massive anti-government carnival looks and sounds like

The massively attended marches and street parties were the latest embarrassment for Duque who had ordered the highest military alert and closed the borders, reportedly because he was made to believe the protests were an attempt to overthrow his government.

Ahead of the protests, the president’s political patron, Alvaro Uribe, and his far-right Democratic Center party had been spinning all kinds of conspiracy theories, some involving satanists and “international anarchists.”

Twitter blocked the former president temporarily on Thursday after he published the names of protest organizers.

Despite the violent incidents in Bogota and Cali and contrary to paranoiac fears of the president and his party, Colombians massively took to the streets and convincingly told Duque they want better government and peace.