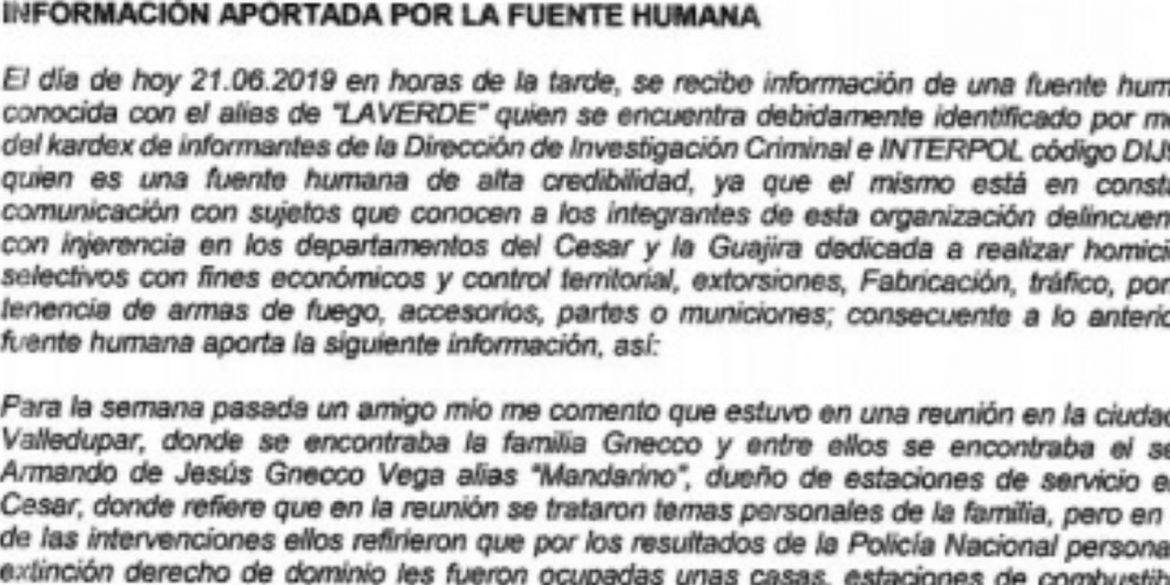 Police knew since last year that the drug lord whose organization conspired with Colombia’s ruling party to rig the 2018 elections in favor of President Ivan Duque sought to jail policemen, according to an internal memo.

The memo was released by attorney Miguel del Rio in an attempt to prevent the jailing of Major Yefferson Tocarruncho and Sergeant Wadith Velasquez earlier this week in an apparent kangaroo trial.

In the memo, the National Police’s intelligence unit DIJIN warned Lieutenant Colonel Luis Fernando Atueste of the police’s human rights unit that an informant had warned them  about the alleged plot between drug trafficking Marquitos Figueroa and the Gnecco crime family.

At the meeting on June 21, 2019, was Armando Gnecco, a.k.a. “Mandarino,” who was laundering money for Figueroa as well as the late Jose Guillermo Hernandez, Figueroa’s “political arm” who plotted to rig the elections with Duque’s Democratic Center party, according to the informant.

Like former President Alvaro Uribe, the boss of the CD, the Gnecco crime family have been associated with both organized crime and politics for decades.

They said that as a result of the National Police, some houses, gas stations and other properties were confiscated by extinguishing personnel and that this was because Sergeant Velasquez, Major Tocamuncho and his group of investigators from the city were behind this operation, so that’s why they were going to get a large amount of money together — whatever it takes to pay — to reach the highest levels of the prosecutors and judges, with the aim of criminally arresting the sergeant, the major and the group of investigators of committing procedural fraud, and that they themselves be removed from office, so that they don’t continue investigating the organization, and that it was necessary to put Sergeant Velasquez, Major Tocamuncho and the group of investigators in jail.

The meeting allegedly took place after the murder of Hernandez in Brazil in May and before March when journalists revealed evidence the murdered money launderer had conversations with Uribe’s former personal assistant in which they were plotting election fraud in the month ahead of the 2018 elections.

The prosecution, on the other hand, appears to be trying to have the wiretaps and recordings that provide the smoking gun in the investigations be declared illegal.

The jailing of the policemen and the fact Figueroa has still not been convicted four years after he was extradited from Brazil indicate how enormous the drug trafficker’s influence is to corrupt Colombia’s democratic system.