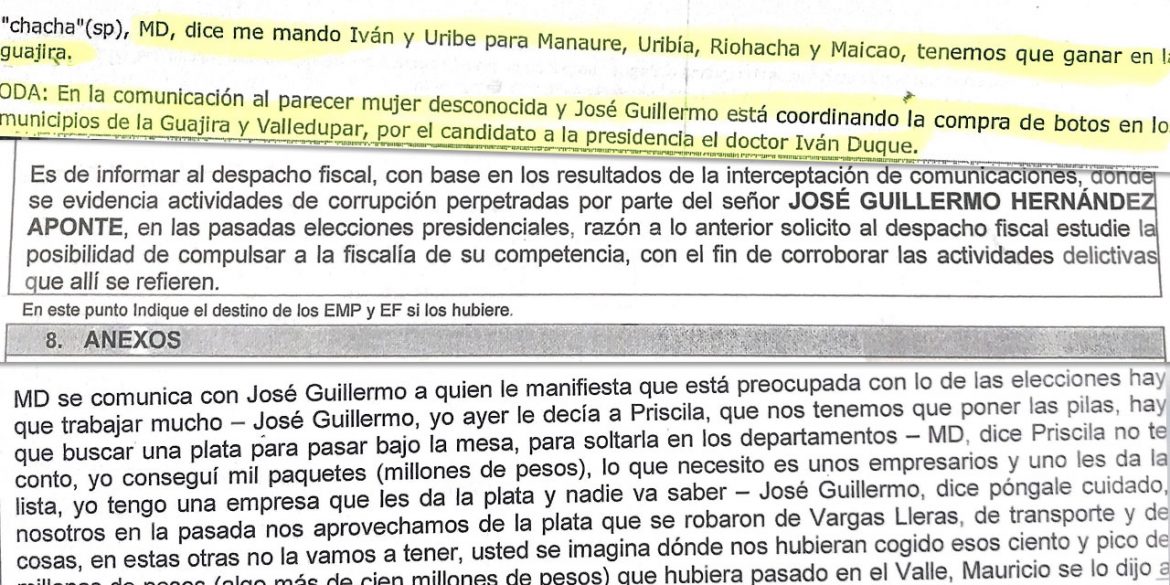 A murder investigation circumstantially recorded a late drug trafficker claiming to be key in a vote-buying operation for President Ivan Duque, at the order of former president Alvaro Uribe.

Jose Guillermo Hernandez, alias Ñeñe, was killed in May last year in Uberaba, Mina Gerais, Brazil, under vague circumstances that have been presented as an attempted robbery.

Ñeñe, according to Colombian and US authorities, was a partner of drug trafficker and murderer Marcos Figueroa, who is now in jail and on trial in Colombia. 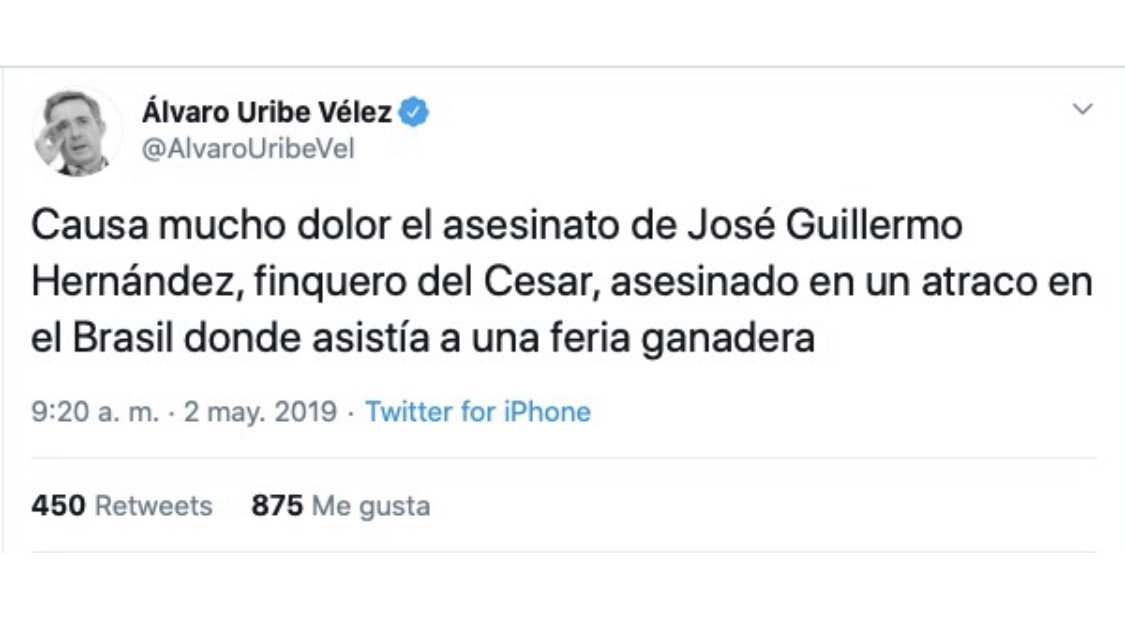 Once the death of Ñeñe became known, Uribe was the first in Colombia to deplore the fact.

The evidence proving electoral fraud and in the possession of this journalist is among thousands of calls that were wiretapped at the request of the Prosecutor General’s Office in a Barranquilla murder case, but never used to investigate vote buying, even though they were examined and separated by analysts from the Directorate of Criminal Investigation and Interpol, DIJIN.

“Ñeñe” Hernández was one of Duque’s main guests at his inauguration ceremony on August 7, 2018. He had a better seat than the judges of the high courts.

The close friendship between the drug trafficker and Duque was documented by journalist Julian Martinez in his online program Revelados.

In one of the recordings of the conversations you can hear “Ñeñe” revealing that he stole money that was meant for buying votes in the Caribbean region for German Vargas Lleras in the first round and, apparently, used this to buy them from Duque in the second round.

As a matter of fact, in a conversation with a person named “Priscilla”, the narco says: “Be careful, we took advantage of the money that in the last one was stolen from Vargas Lleras for transport and stuff in the other one we are not going to have. Can you imagine where those hundreds of millions of pesos and some would have taken us, what would have happened in Valle?”

The conversations of Ñeñe Hernandez with Priscilla showed that there were more than a billion pesos involved in a money delivery and that the narco explained he was in charge of getting entrepreneurs to commit to buying votes for Duque.

The billion pesos Priscilla apparently received from someone named Mauricio.

The DIJIN recordings for the prosecution also revealed that a prosecutor named Ricardo Bejarano was in contact with ‘Neñe’, advising him of the confidential proceedings that the Prosecutor General’s Office was carrying out against him and warned him when his communications were being wiretapped.

The prosecution has 26 criminal investigations against Bejarano for crimes such as omission against the interests of public administration, threats, assault, verbal abuse and bribery. All the cases are frozen.

The homicide case in which the evidence of vote buying for Duque appeared circumstantially relates to the death of Oscar Rodriguez, a young man who was mistaken for his father, tailor Carlos Rodriguez, who had just returned to Colombia after paying a penalty for money laundering in the United States.

Rodriguez wanted Ñeñe to pay an old debt of COP1 billion ($290,000). In order not to pay, he decided to kill him with hitmen of his partner, Figueroa. But the assassins mistook him for his son.

“I made a mistake because the father of the kid was always in that car and that day they changed… Because of that mistake they didn’t pay me for the gig, they only gave me my travel expenses. They gave me $3 million in advance in Bogota, a week before I arrived here [in Barranquilla],” declared confessed assassin Diego Acuña.

In an interview with La Nueva Prensa, the lawyer for the civil party in the case of the murdered young man, criminal lawyer Miguel Angel del Rio expressed his certainty that the case is paralyzed and has been hindered due to the high-level criminal interests around ‘Ñeñe’ Hernández and his corrupt political relation.

For this lawyer the available recordings demonstrate on one hand the illegitimacy of this government that used a thug to win the presidential elections in La Guajira. And, on the other hand, they vindicate the reasons why the process for the murder of Oscar Eduardo Rodriguez, which involved Ñeñe Hernandez and Marquitos Figueroa, has not found justice and the collusion between prosecutor Ricardo Bejarano and Ñeñe Hernandez in this criminal action is revealed.