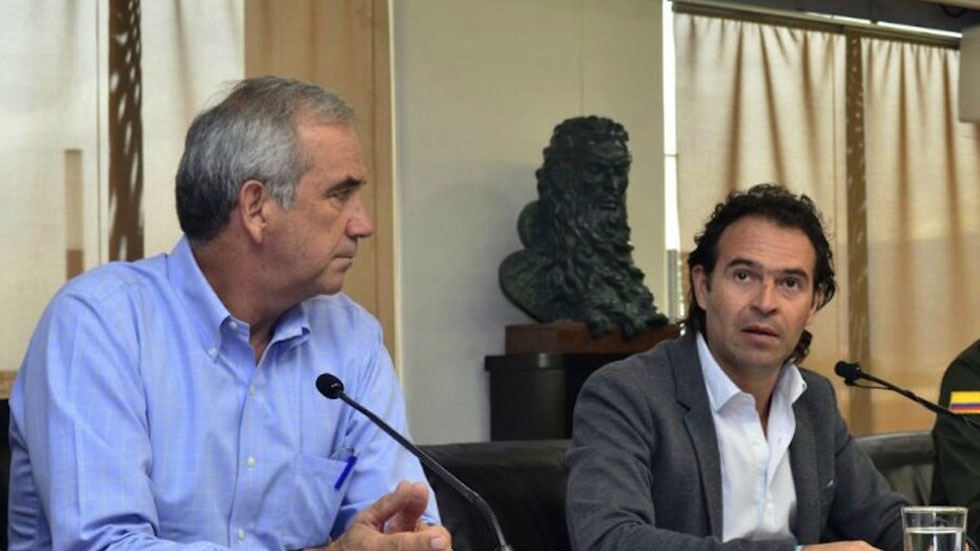 When Medellin‘s mayor last week said he will continue his “relentless” fight against crime, he did not mention the fact he has personally been accused of being an associate of Medellin Cartel heir Oficina de Envigado.

This became clear at the parole hearings of Mayor Federico Gutierrez‘ parole hearing where the judge said there was enough evidence meriting the jailing of the mayor’s right-hand man, dynasty politician Gustavo Villegas.

Villegas, reportedly a long-time friend of former President Alvaro Uribe and presidential candidate Sergio Fajardo, was arrested on charges he had been working together with La Oficina for years.

Additionally, one of the attorneys of the Oficina members has said the local arch bishop “blessed” the bartered surrender to authorities of mid-level commanders of La Oficina.

The arrest of a member of one of Medellin’s most prominent dynasties sent a shock wave throughout the city as the potential fall-out implicated the same families who have long dominated local politics.

While Uribe has long been accused of being linked to the Medellin Cartel and its hears, charges implicating the self-proclaimed anti-corruption candidate Fajardo, whose administration allegedly made business deals with members of La Oficina.

These alleged claims came to boil in 2008, when the city’s chief prosecutor was arrested and ultimately sentenced after similar charges. Former chief prosecutor Guillermo Valencia is the brother of then-Interior and Justice Minister Fabio Valencia.

Police sources close to the investigations told the newspaper that Villegas has basically taken over Valencia’s roll as La Oficina’s representative in the state system. According to these claims, both Valencia and Villegas would publicly present third-ranking members of La Oficina as the top leaders, leaving the #1 and #2 of the organization unknown to and unwanted by the police.

At the parole hearing, the prosecution presented audio recordings, photos and video footage in which Villegas and his adviser Mariano Zea were heard talking, allegedly to La Oficina capos “Pichigordo” and Julio Perdomo, who had already been arrested in March, reported newspaper El Tiempo.

The video and audio footage showed that Villegas and his adviser, a former ELN rebel, personally met with these crime bosses, while wiretaps would prove Villegas was La Oficina’s top representative in the Gutierrez administration.

Controversially, in that same video footage, the crime lords said that Villegas had secured them that the mayor was personally aware of the deals made between his administration, according to RCN Radio.

According to the prosecution, the video, photo and audio footage was proof Villegas helped to keep the crime syndicates’ top leaders out of prison and warned them of impending search warrants.

Villegas’ defense had asked to allow the former security to await his trial at home, claiming he “wouldn’t last three days in jail.”

The judge rejected this claim and sent to former security secretary to jail, claiming his contacts within both the police department and La Oficina would allow him to severely obstruct the criminal investigation against him and possible allies within the government, like Gutierrez, and the Medellin Police department.

According to El Tiempo, the gang members had been working with Villegas since the 1990s when the strictly hierarchic crime syndicate was still under control of “Don Berna,” the heir of Pablo Escobar.

This means that years before now-presidential candidate Fajardo put him in charge of the demobilization of Berna and his men in 2004.

While formally demobilizing his so-called Cacique Nutibara Bloc (BCN), Berna made sure his Oficina de Envigado —  which effectively formed the BCN — stayed in control of the city’s criminal paramilitary underworld.

The organization formed as Pablo’s Escobar’s enforcing the city has had control over much of Medellin’s illicit economy and ties to the regional elite since before the late drug lord made it to Congress in 1982.