How to steal land the size of a small country and get away with it | Part IV: the head check

Colombia’s Inspector General formally requested a head-check for a judge who intimidated a conflict victim after she requested the restitution of stolen land.

The jaw-dropping incident happened during the hearing of a 65-year-old woman whose land in Chigorodo, Antioquia, was dispossessed by an alleged business associate of now-defunct paramilitary organization AUC.

The displaced farmer, Maria Murillo, is one of 120,000 farmers who say their land was dispossessed by businessmen who in some cases colluded with death squads in one of the biggest land heists since Spanish colonization.

“Why do you want the restitution of a plot where all banana plantations of Antioquia’s Uraba [region] are?” the judge asked.

Murillo’s defense attorney objected, but judge Alejandro Rincon threatened to “throw you before the prosecution” and wanted to know why the victim was represented by the Colombian Commission of Jurists, a renowned victims advocate group. 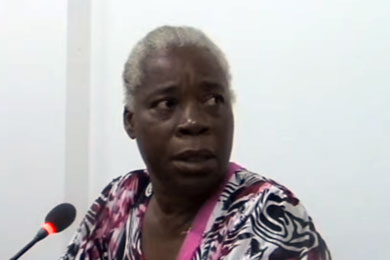 “Why do they represent you in returning a plot that belongs to banana plantations? I want you to answer because if not I will immediately alert the Prosecutor General’s Office.”

Visibly intimidated, Murillo explained that “I have never been involved in cases like this” before Rincon told her to shut up and adjourned the hearing.

What did the victim do wrong?

Murillo, a black peasant, had the audacity to reclaim the rights of a plot she and 28 other families bought in 1996 from banana association director Jesus Sanin, the cousin of former Foreign Minister Noemi Sanin and a close ally of Antioquia’s controversial governor candidate Anibal Gaviria.

Immediately after the neighbors paid off Gaviria’s associate, the paramilitaries who admittedly sponsored the governor candidate’s 2003 campaign began intimidating the farmers.

In 1999, four of the cooperative’s members were assassinated, the families were forced to abandoned the farm and alleged paramilitary associate Jesus Rodrigo Rojo fraudulently put their cooperative in his name.

The Gaviria family: one of Colombia’s primary land thieves now after the country’s second largest economy

What would be wrong with the judge’s head?

Both the victim’s attorney and the Inspector General’s representative announced action against Rincon for his abusive behavior and possible corruption.

To sustain his argument Murillo had no right to reclaim her stolen land, the judge cited and showed a proposed bill of Colombia’s far-right ruling party, the Democratic Center.

This proposal of Senator Maria Fernanda Cabal to benefit convicted swindlers like the Gaviria family has no legal value because it hasn’t been approved by Congress.

The fact that the judge has received the bill with the logos of the Democratic Center indicates that there is a fluidity between Judge Rincon Gallego and this political party.

Murillo’s defense attorney, Lizeth Montero, requested Rincon to be recused from the case and filed criminal charges against the judge. The inspector general’s representative requested the judge’s head be checked.

If appropriate, order an occupational health visit to perform an assessment of the official in order to determine whether he is mentally fit to perform his job.

Unless Colombia’s prosecution does what it often does, nothing, Rincon could lose his job and even end up with a criminal record as the entire hearing was on record and recorded by the court’s video cameras.

The judge told newspaper he is not aware of any wrongdoings and was primarily upset his alleged abuse was on tape, apparently unaware this is standard procedure.